The Boeing aircraft that was involved in two devastating crashes less than six months apart is still being flown in Australia by two airlines.

Boeing’s 737 Max 8 jets were involved in both crashes – a Lion Air flight slamming into the Java Sea last October and an Ethiopian Airlines service crashing shortly after take-off from Addis Ababa on Sunday. A total of 338 people were killed.

Virgin Australia has ordered a fleet of 30 Max 8 jets due to arrive in November, and two airlines that currently use the planes in Australia – SilkAir and Fiji Airways – have said they will continue to do so. 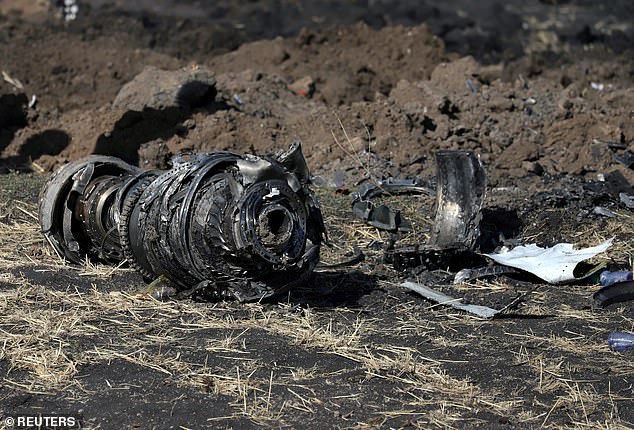 A Boeing 737 Max 8 aircraft crashed near Addis Ababa in Ethiopia on Sunday. Pictured: Wreckage from the disaster 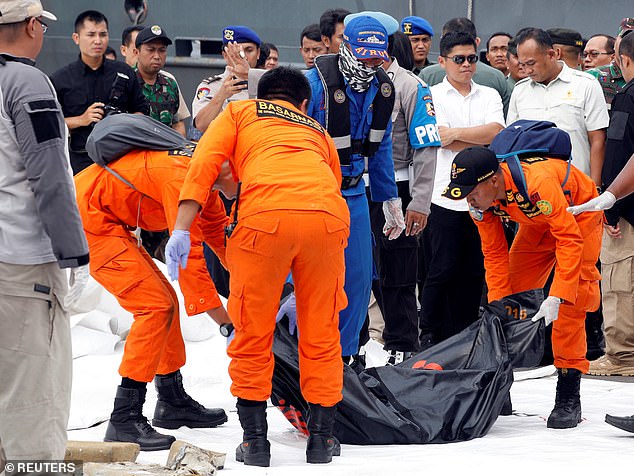 A Lion Air flight slammed into the Java Sea last October. Pictured: Rescuers carry a body bag off a boat following the crash

Singapore Airlines affiliate SilkAir operates the aircraft on flights into Cairns and Darwin, while Fiji Airways flies it from Nadi to Adelaide, Brisbane, Melbourne and Sydney.

Fiji Airways said they had ‘full confidence in the airworthiness of our fleet’.

‘We are incredibly saddened to hear of the tragic accident involving Ethiopian Airlines Flight 302, and are following the situation closely. We extend our deepest sympathies to everyone affected and our thoughts are with them at this very difficult time,’ a Fiji Airways spokesperson told Daily Mail Australia.

‘Fiji Airways followed a comprehensive induction and training process for our new Boeing 737 MAX 8 aircraft. Fiji Airways’ robust training programme is a core part of our commitment to safety.

‘Our Boeing 737 pilots and cabin crew receive extensive ground and simulator training, over and above the mandatory training set for the MAX 8 by the manufacturer.

‘We continue to ensure that our maintenance and training programme for pilots and engineers meets the highest safety standards. The safety of our passengers and crew is, and always will be, our number one priority.’

‘Safety is our top priority and we are currently monitoring the situation closely,’ a Singapore Airlines spokesperson told the Sydney Morning Herald.

‘There is no change to this aircraft’s operation at this point in time.’

Strategic Aviation Solutions Chairman Neil Hansford declared he ‘certainly would not’ fly on the model after the two disasters.

Mr Hansford claimed Boeing could do more to provide information about the plane’s new anti-stall device, known as the Manoeuvring Characteristics Augmentation System.

‘The MCAS takes the control of the aircraft off the pilot if it thinks the plane is going to stall,’ he told the Daily Telegraph.

He said the Boeing manual mentions the MCAS briefly at the back, with no detailed instructions.

Mr Hansford believed the plane had ‘unstable vertical speed’ due to the pilot having to fight against the model’s internal computer.

‘There are two switches to turn it off but clearly the pilot did not know where they were,’ he said.

Meanwhile, a witness claims the Nairobi-bound Ethopian Airlines jet that crashed killing all 157 passengers and crew members on board had ‘smoke pouring from the rear’. 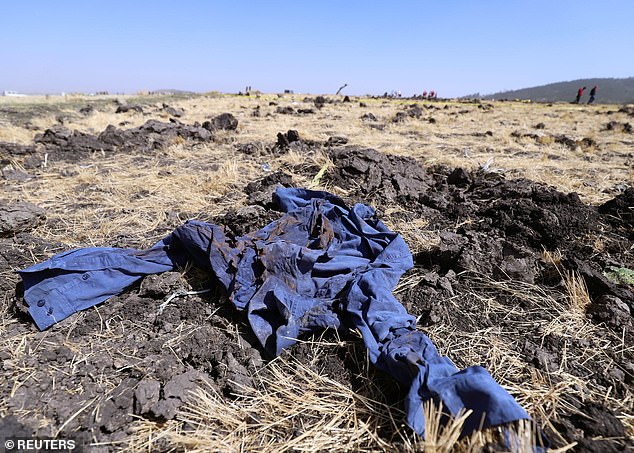 Strategic Aviation Solutions chairman Neil Hansford declared he ‘certainly would not’ fly on the model after the two disasters. Pictured: A shirt at the scene of the Ethiopian Airlines crash on Sunday

Gebeyehu Fikadu said he saw flight ET302 ‘swerving and dipping’ while ‘luggage and clothes came burning down’ when it crashed within minutes of take-off from Addis Ababa on Sunday morning.

Experts have highlighted ‘similarities’ between the tragedies in October and on Sunday.

Indonesia and China have grounded all Boeing 737 Max 8 aircraft while U.S. officials said they would take ‘immediate action’ if they found safety flaws in the planes.

Ethiopian Airlines and Cayman Airways have also taken the jets out of service.

As Ethiopia marked a day of mourning and the search for remains entered a second day, rescuers said they had recovered the aircraft’s black box which is expected to shed light on the cause of the crash. 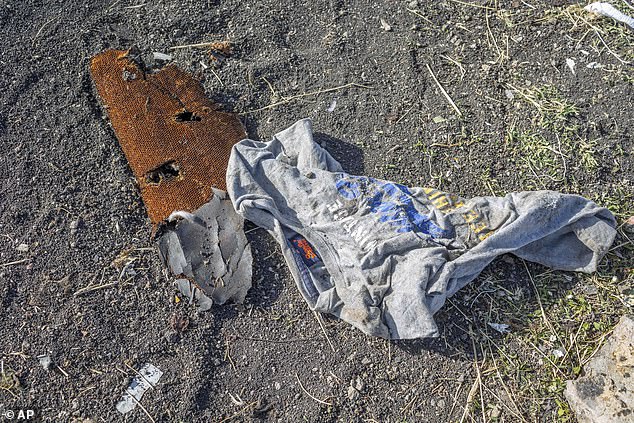