Syracuse police confirmed to local media outlets that the stabbings happened around 4:15 p.m. at Destiny USA shopping and entertainment complex.

Police and the mall’s management say the dispute began at a Macy’s store but It’s not immediately clear what sparked the bloody confrontation.

Officers found one man stabbed in the abdomen and another man in the back. Both men are in their 20s and were taken to a hospital with non life-threatening injuries.

Photos by Syracuse.com and WSYR-TV show a portion of Macy’s and another store’s entrance taped off.

Destiny USA’s management says in a statement the bloodshed was an ‘isolated incident’ that’s ‘absolutely unacceptable.’

They say the stabbing ‘strengthens our resolve to remain vigilant.’ 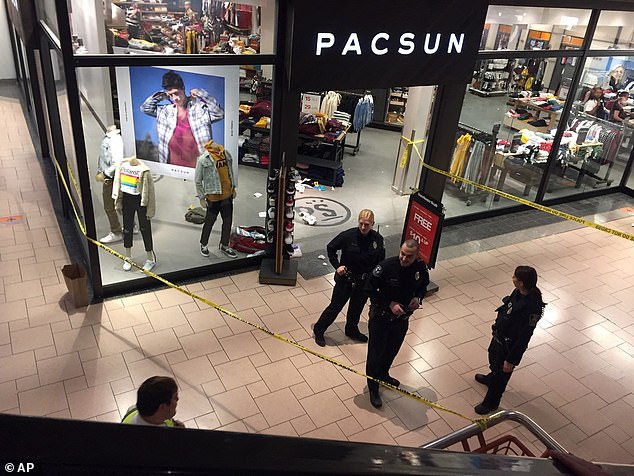 A confrontation started at Macy’s before it continued at Pascun, officers worked with mall security to secure the scene 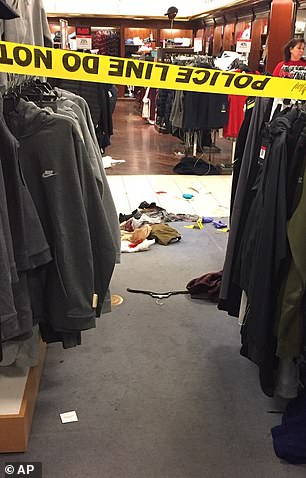 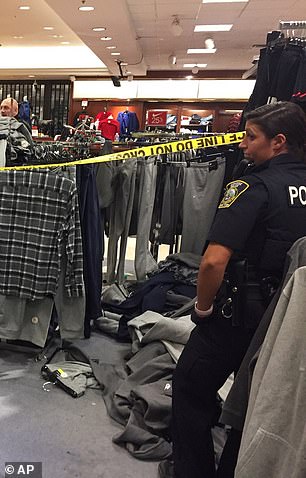 At least 10 officers in addition to mall security were at the scene where a witness said a man appeared to have run down the escalator from Macy’s to Pacsun.

Pascun clothing store also had paper towels covering blood on the floor while Macy’s was evacuated during the melee.

The news comes as Black Friday chaos swept across the world.

A 21-year-old black man was killed by police in a mall in Alabama yesterday.

Police have since admitted he was not the gunman they were responding to after shots rang out in Riverchase Galleria mall. 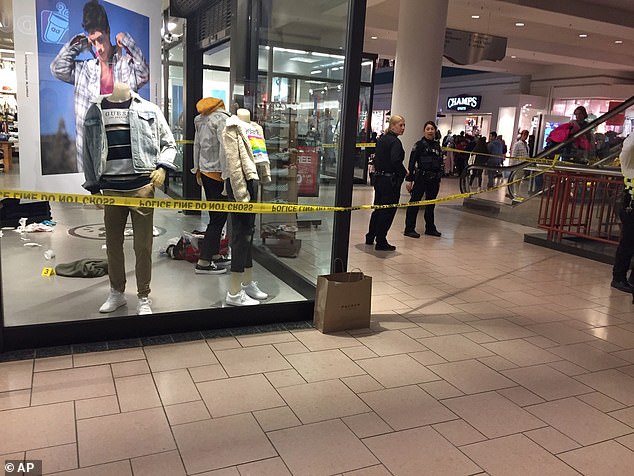 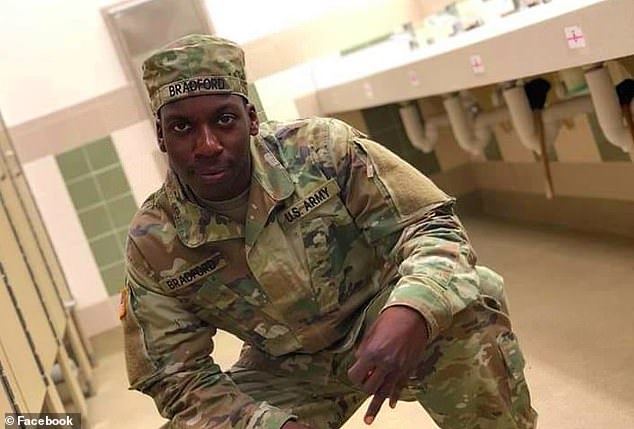 Emantic Fitzgerald Bradford Jr., the son of a Birmingham cop and a member of the US Army, was shot dead by officers responding to reports

They have since added that the real gunman is still on the loose.

Emantic Fitzgerald Bradford Jr., the son of a Birmingham cop and a combat engineer in the US Army, was shot dead by officers responding to reports of an active shooter at the Riverchase Galleria on Thanksgiving Day.

An 18-year-old boy was shot twice after getting into a fight with the gunman, and a nearby 12-year-old girl was also injured when struck by a stray bullet.

On Friday evening, Hoover Police Department revealed new evidence showing that Bradford may have been involved in an altercation with the 18-year-old, and at least one other individual, ‘he likely did not fire the rounds’ that injured the victims. 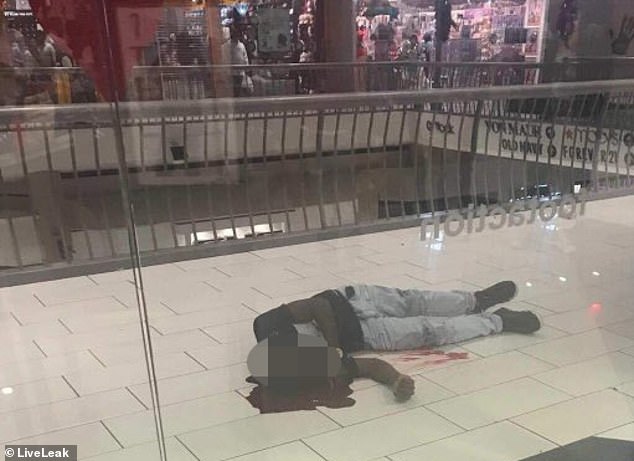 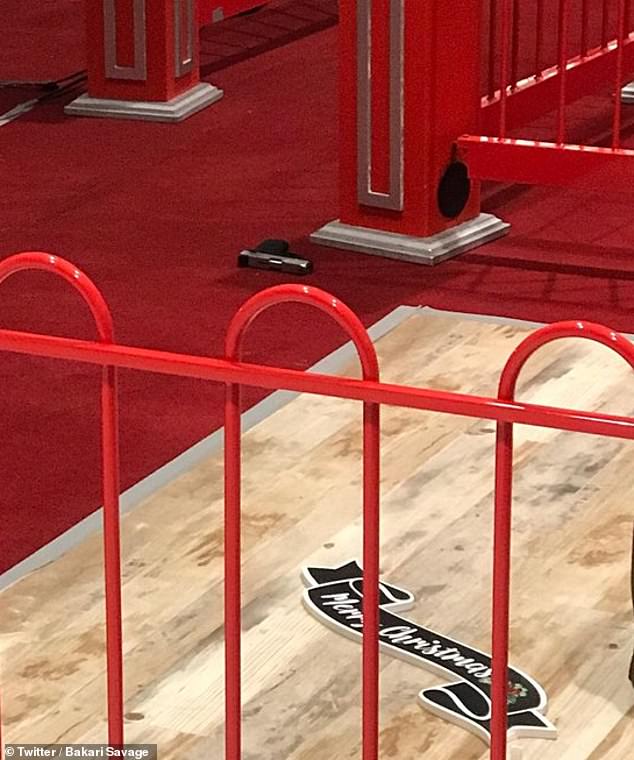 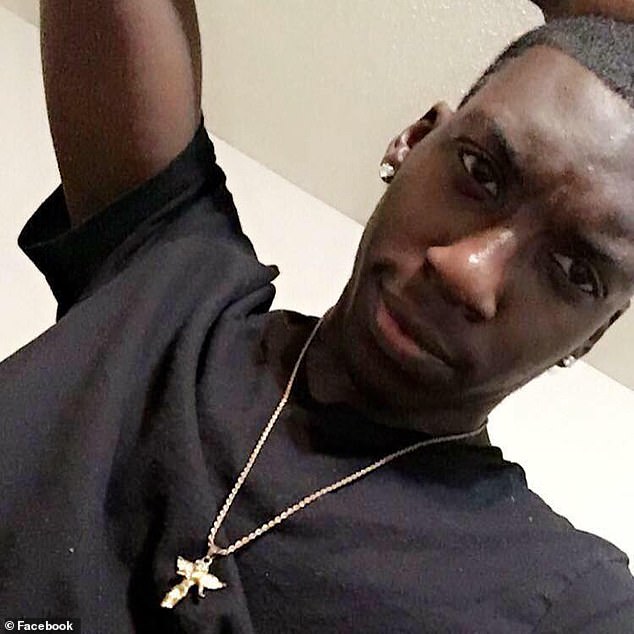 Bradford’s devastated stepmother, Cynthia Kenniebrew Bradford, hopes to clear her son’s name, writing that she was ‘sick of all the lies going around.’

Witnesses told WBRC in Alabama that the shooting happened ‘between JCPenney and Footaction near the food court.’ 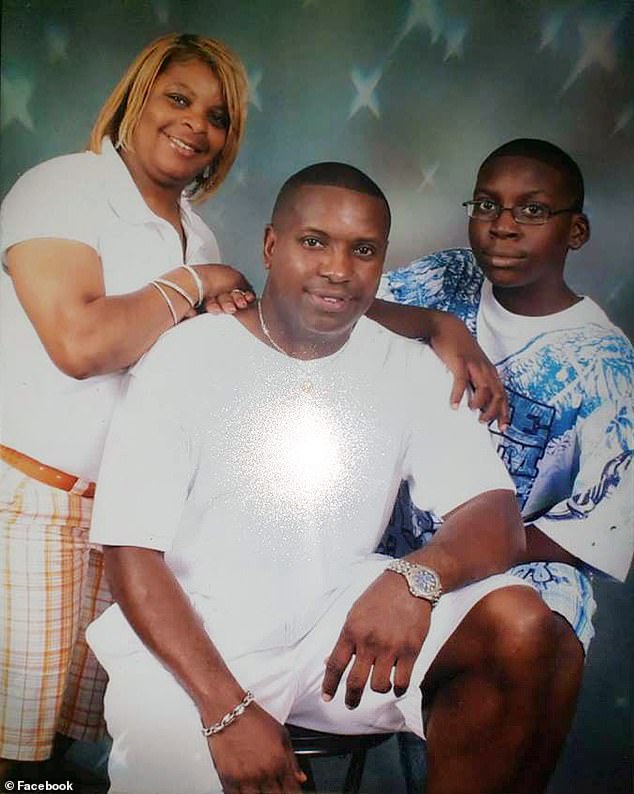 Bradford’s stepmother, Cynthia Kenniebrew Bradford, shared this family photo in a post where she wrote how she was devastated to lose her son 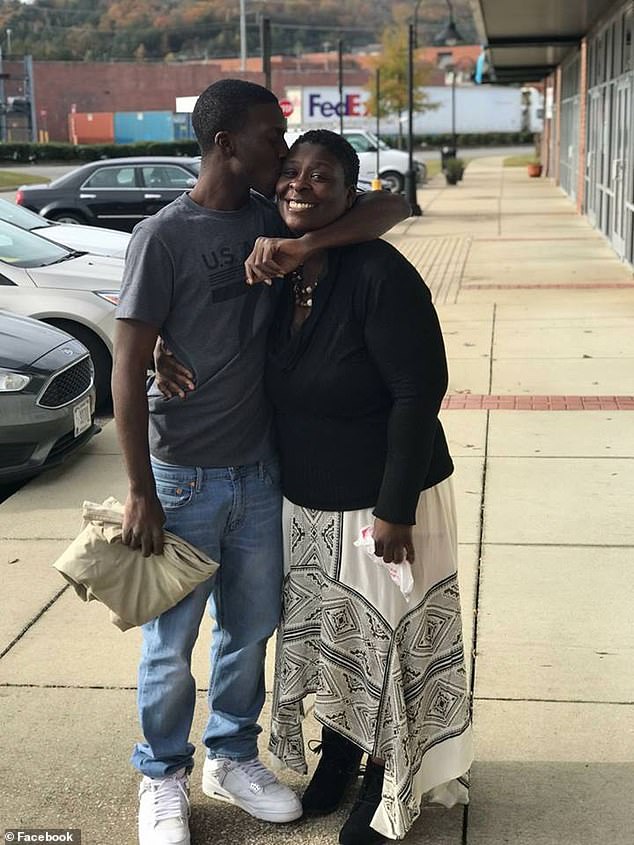 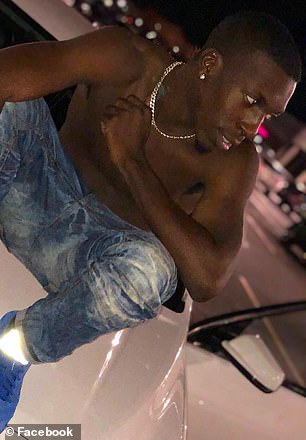 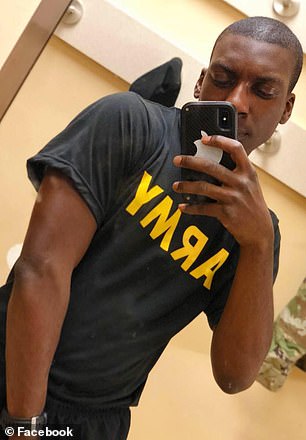 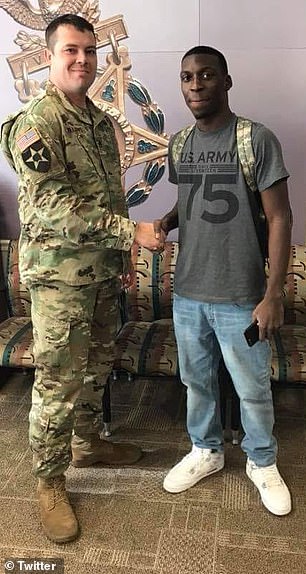 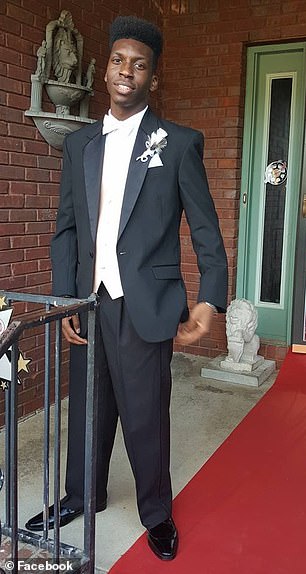 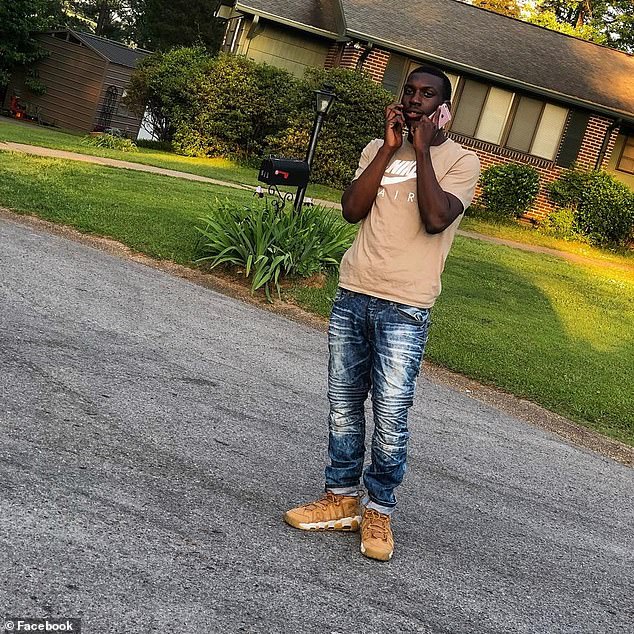 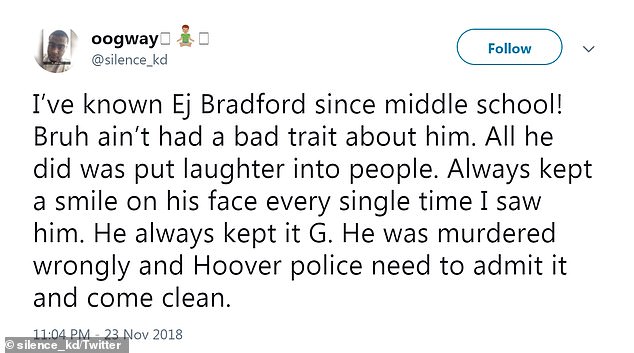 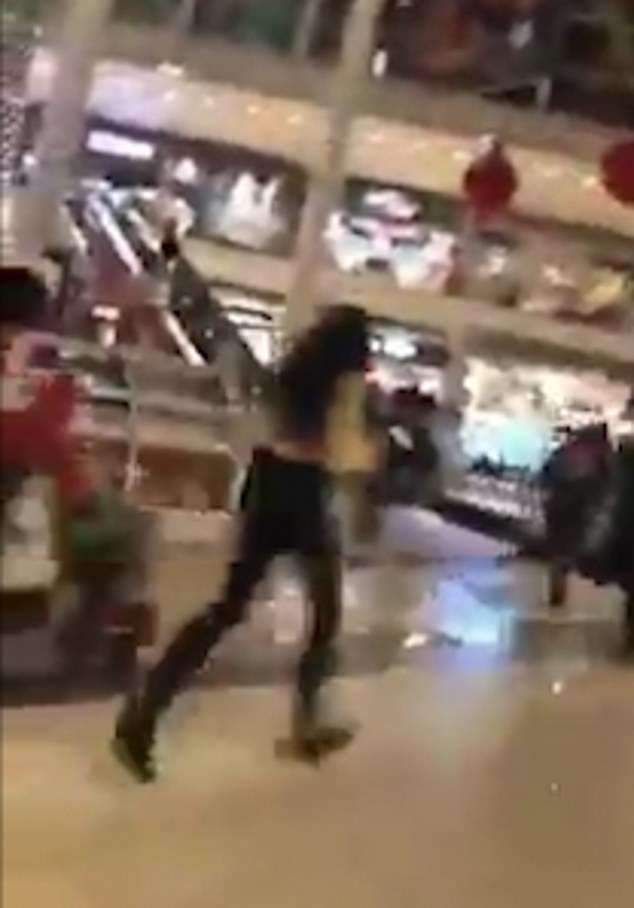 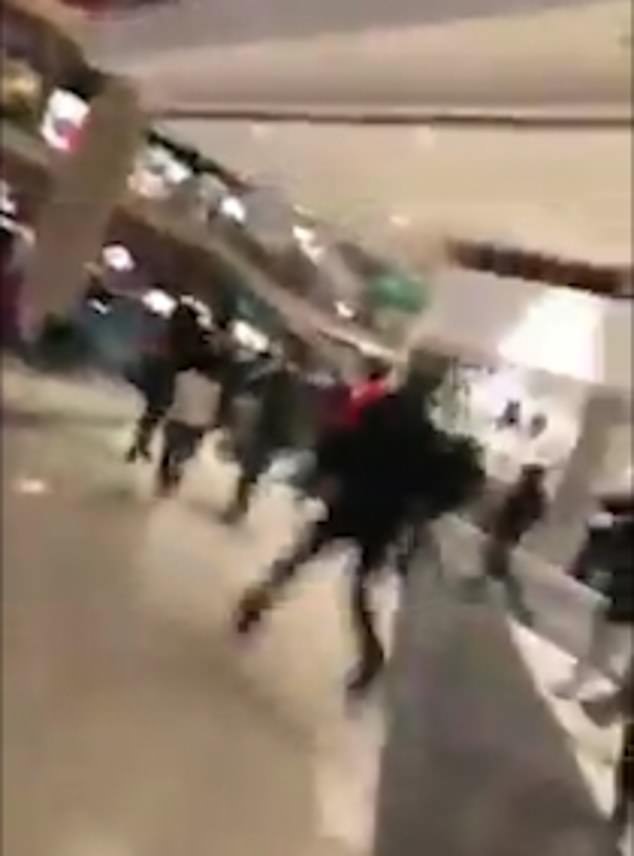 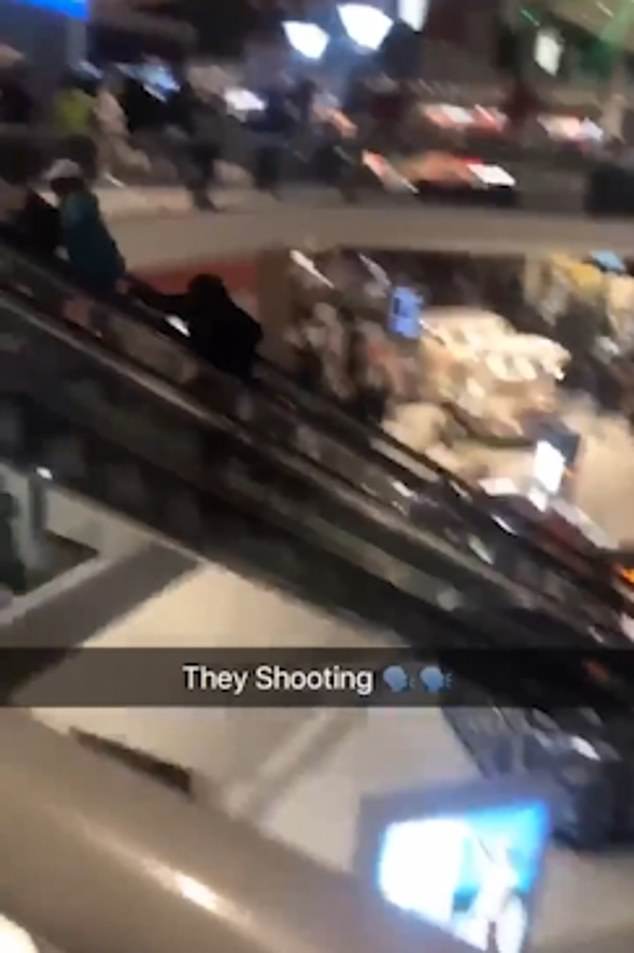