Two different men have independently claimed they were involved in the encounter described by Christine Blasey Ford, not Supreme Court Nominee Brett Kavanaugh, it has been revealed.

Both men claimed to the Senate Judiciary Committee that it was them who were involved in the incident at a high school party in 1982.

Ford has accused Kavanaugh of pinning her to a bed and covering her mouth while trying to remove her clothing as his friend Mark Judge watched when she was 15 years old.

The Senate Judiciary Committee said it interviewed the first man who came forward.

Sen Chuck Grassley released a statement on Wednesday revealing the man ‘believes he, not Judge Kavanaugh, had the encounter in question with Dr Ford’.

On Wednesday, a day before both Ford and Kavanaugh are due to testify, the committee also spoke to another man who believes it was he who actually had the encounter with Ford in 1982 that is ‘the basis of her allegation’.

The committee said it interviewed the first man who took responsibility for the assault on September 24, according to Buzzfeed News.

He was interviewed again on September 25 and ‘described his recollection of their interaction in some detail’, according to the committee. 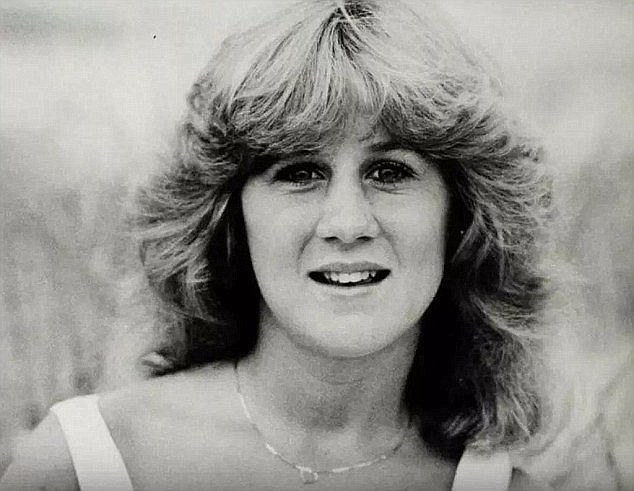 Both men claimed to the Senate Judiciary Committee who was involved in the encounter with Ford at a high school party in 1982, not Supreme Court Nominee Brett Kavanaugh 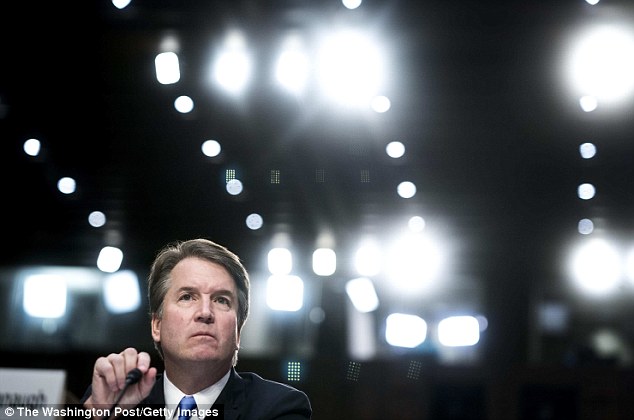 The committee received an ‘in-depth written statement’ from the man on September 26, the same day they received a phone call from another man claiming he had the encounter.

‘He explained his recollection of the details of the encounter,’ the committee said.

The committee did not release the identities of either men, nor did it reveal whether it found their accounts credible or worthy of following up.

Unlike many states, Maryland does not have a statue of limitations for felony sexual offenses.

Ford has maintained that she vividly remembers the assault with Kavanaugh. She has also passed a polygraph test.

‘It was hard for me to breathe, and I thought that Brett was accidentally going to kill me,’ Ford wrote in her prepared remarks prior to Thursday’s hearing. 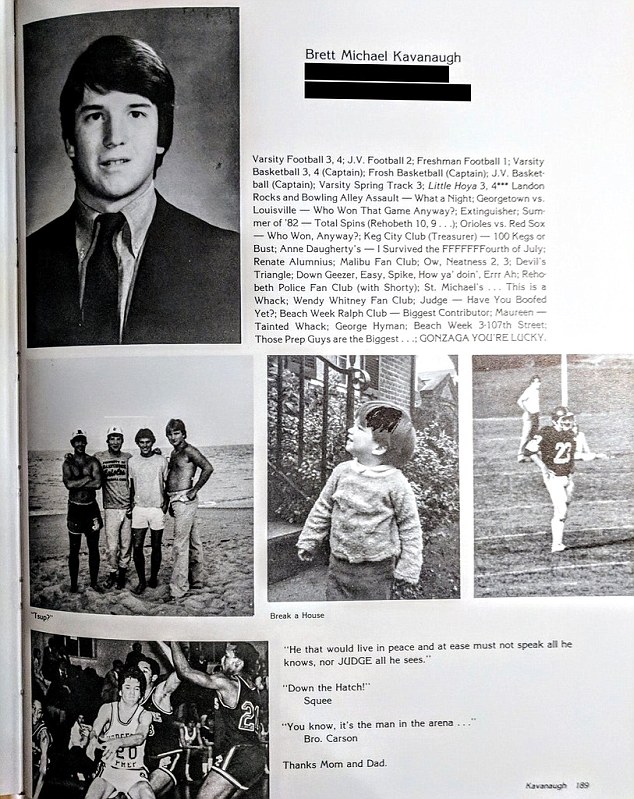 Two men independently claiming they had the enconter amid more revelations about Kavanaugh’s alcohol-fueled time at Georgetown Prep, in which his yearbook revealed he was part of the ‘Keg City Club’ and pledged ‘100 Kegs or Bust’

‘Both Brett and Mark were drunkenly laughing during the attack. They both seemed to be having a good time.

‘Mark was urging Brett on, although at times he told Brett to stop. A couple of times I made eye contact with Mark and thought he might try to help me, but he did not.’

Two men independently claiming they assaulted Ford when she was 15 years old come amid more lurid revelations about Kavanaugh’s time at Georgetown Prep.

Kavanaugh’s nomination has opened the door to a shocking world of the children of Washington’s wealthiest, who pay as much as $50,000 a year to exclusive schools which offer gilt-edged educations and entries into elite circles.

And in the 1980s the exclusive all-boys school in Bethesda, Maryland was almost as infamous for its parties as it was for its ability to send boys to the Ivy League.

‘All of these Catholic schools were wild,’ one woman who attended an exclusive Washington school for girls and whose brother attended Prep told AFP. 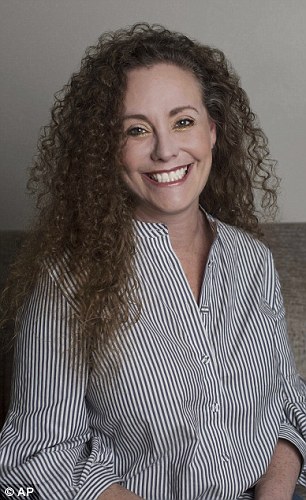 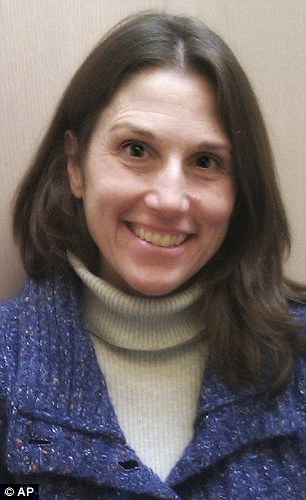 Since Ford has come forward, both Julie Swetnick (left) and Deborah Ramirez (right) have accused Kavanaugh of sexual assault

‘They have a wonderful reputation for education, and they also have a lot of bad boys. If it wasn’t drinking, it was gambling,’ she said.

Kavanaugh has denied accusations that he sexually assaulted or abused women in some of those parties.

But student yearbooks from Prep and other schools, including Holton-Arms academy – where one of his accusers went – testify to the rowdy party culture they lived at the time.

The teens of the time clearly had money to burn and their own cars to get to weekly parties students held in massive suburban Washington homes, usually when parents were out of town. 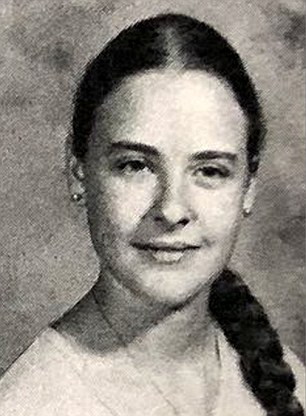 The Holton-Arms yearbooks note that invitations to Georgetown Prep parties were highly coveted, where the things of importance were ‘boys and beers’ and the main activity all-night drinking games.

‘Striving to extend our educational experience beyond the confines of the classroom, we played such intellectually stimulating games as Quarters, Mexican Dice, and everyone’s favorite, Pass-Out, which usually resulted from the aforementioned two,’ one student Holton-Arms student wrote.

In his yearbook, Kavanaugh described himself as ‘treasurer’ of the ‘Keg City Club,’ adding ‘100 kegs or bust’ – a reference to a pledge by a group of classmates to drink 100 kegs of beer before they graduate.

Judge later wrote an entire book about the roots of his alcoholism at Georgetown Prep titled ‘Wasted: Tales of a Gen X Drunk’.

After the first beer, he recalled of an early party: ‘I found it impossible to stop until I was completely annihilated’.

He also referred to his pseudonymous friend ‘Bart O’Kavanaugh’ vomiting and passing out in a car after one late-night party.

Until his nomination, Kavanaugh’s life at Georgetown Prep was something he would joke about. 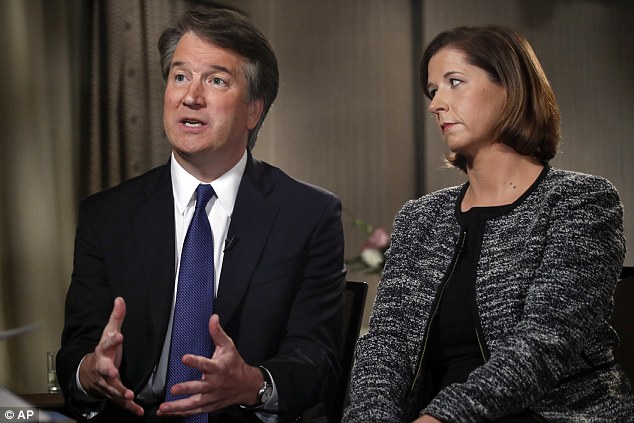 Until his nomination, Kavanaugh’s life at Georgetown Prep was something he would joke about. Now Kavanaugh claims he was focused on studying and sports

But Kavanaugh has sung an entirely different tune since Ford and two other women have publicly come forward to accuse him of assault.

‘The vast majority of the time I spent in high school was studying or focused on sports and being a good friend to the boys and the girls that I was friends with,’ he told Fox News on Monday.

It was an image that stood in stark contrast to the wild – and horrific – parties Julie Swetnick claimed she witnessed in the 1980s.

Swetnick said in an affidavit that she attended at least 10 parties with Kavanaugh and Judge between 1981 and 1983.

She claims she saw them spiking ‘punch’ drinks with drugs and alcohol in order to get female partygoers incapacitated and run group sex ‘trains’ on them.

Swetnick said she witnessed groups of boys raping the intoxicated girls, and saw boys lining up outside bedrooms to wait their turn to have group sex with the young women.

‘I also witnessed efforts by Mark Judge, Brett Kavanaugh and others to cause girls to become inebriated and disoriented so they could be ‘gang-raped’ in a side room or bedroom by a ‘train’ of numerous boys,’ she said in her affidavit.

‘I have a firm recollection of seeing boys lined up outside rooms at many of these parties waiting for their ‘turn’ with a girl inside the room,’ she added.

According to Swetnick, she saw Kavanaugh and Judge waiting in line during these group rape episodes.

Swetnick said she was also gang-raped at one of these parties in 1982 after having her drink spiked with what she believes was Quaaludes. She said Kavanaugh and Judge were also at this party, but did not specify whether the two boys participated in assaulting her.

‘In approximately 1982, I became a victim of one of these ‘gang’ or ‘train’ rapes where Mark Judge and Brett Kavanaugh were present,’ she said.

‘During the incident, I was incapacitated without my consent and unable to fight off the boys raping me.’