Two men have been stabbed to death in London, bringing the fatal stabbing toll in the capital to 40 this year.

A 20-year-old man was found fatally wounded on Roth Walk, near Finsbury Park, north London at around 3am on Saturday, Scotland Yard said.

Medical staff fought to save his life but he was confirmed dead at the scene.

Another man, aged 21, was also found with stab wounds nearby and was taken to hospital with non-life threatening injuries.

Another murder investigation has been launched by the Met after a man died following an assault in Morden, southwest London on Thursday.

Police were called at 10.17pm on Thursday, after ambulance staff suspected that a 32-year-old man collapsed on London Road in Morden had been assaulted.

He was taken to a south London hospital in a critical condition. He died at 11.45pm on Friday, 20 April.

Officers have established that the victim was involved in a fight with a man in the street.

Detectives from the Homicide and Major Crime Command are investigating.

A 31-year-old man was arrested on suspicion of murder on Friday, 20 April and taken to a south London police station where he remains in custody.

It comes amid warnings from top trauma surgeon Martin Griffiths who has predicted a summer of ‘carnage’ as youth violence rises across the capital.

He warns that the warmer weather will further increase the bloodshed among young people.

Police were called at 10.17pm on Thursday, after ambulance staff suspected that a 32-year-old man collapsed on London Road in Morden had been assaulted

Mr Griffiths, who works at the Royal London Hospital in east London, said that treating children with knife and gunshot wounds had become ‘the bread and butter’ of his job.

The stabbed 21-year-old has subsequently been arrested on suspicion of murder, possession of an offensive weapon and affray. He remains in custody at a north London police station.

At this early stage it is believed both males had been involved in an altercation involving a number of other people in the area of Roth Walk prior to the emergency services being called.

Detectives from the Homicide and Major Crime Command are investigating.

On Twitter the victim’s sister made an emotional appeal for bloodshed on the capital’s streets to end after the killing in Labour leader Jeremy Corbyn’s constituency.

She wrote: ‘My younger brother, my only brother got stabbed to death this morning. Guys this needs to stop. The pain I’m experiencing is indescribable.’

Another friend tweeted: ‘Heart shattered into a million pieces. Stabbings are just statistics until they happen to a loved one’, reported the Evening Standard.

Mayor of London Sadiq Khan posted online about the killing, saying he was ‘deeply saddened’ by ‘another life unnecessarily lost to violent crime on our streets’.

He said: ‘The Met Police are using extra City Hall resources to fight this scourge and to remove violent criminals and weapons from the streets.

‘We are also working tirelessly with the Met Police, community and youth groups, health and education services, and local and national government on preventing young people getting dragged in to lives of violent crime.’

‘I’m in touch with @MPSIslington, @jeremycorbyn and ward councillors. Thoughts clearly with the victim’s family.’

Scotland Yard has launched more than 60 murder inquiries so far in 2018 following a surge of violent crime in the capital.

A Scotland Yard spokeswoman said police had been called to the scene in Finsbury Park at about 3am.

She said: ‘A 21-year-old male was found at the scene suffering from stab wounds. He was taken to a north London hospital where his condition is not life threatening.

‘A short distance away at Roth Walk, N7, a second male, aged 20, was found suffering from stab wounds. Despite the efforts of medics, he was sadly pronounced dead at the scene.

‘Enquiries are under way to trace next of kin. The 21-year-old injured male was arrested.’ 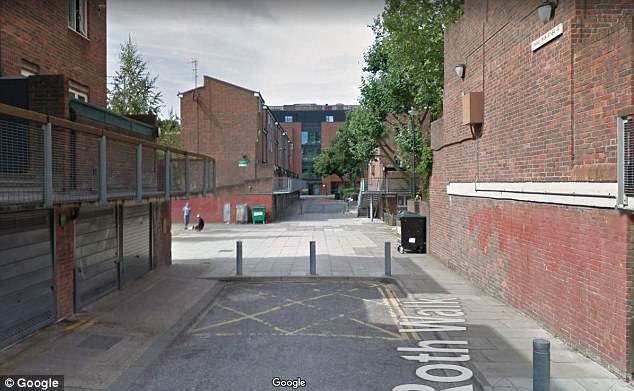 He was found fatally wounded on Roth Walk, near Finsbury Park, at around 3am on Saturday, Scotland Yard said

Commenting on the wave of violence Mr Griffiths told the Times: ‘I’m a trauma surgeon, not a paediatric surgeon. We’re having to use the skillset that we use to look after adult trauma injuries for kids.

‘That was never part of the deal. But we look after children now — that’s what we do. Welcome to the new normal.’

He added: ‘We handled a terrorist attack like we handle a busy Saturday night.

‘Every day an ambulance rolls up with a kid who has been stabbed. That can’t be right. We’re not at war.’