This is the moment two female drivers strangled each other before the Jaguar owner body-slammed her nemesis to the floor in a dramatic road rage show-down.

Shocking footage obtained exclusively by MailOnline shows the pair brawling in broad daylight yesterday afternoon as crying children looked on and begged them to stop.

Witnesses said the row turned violent after a blonde Jaguar driver slammed on her brakes in the middle of a busy main road in Northampton to confront the motorist of a grey Audi.

The fair-haired lady, described as being in her 40s, reportedly approached the dark-haired younger driver of the vehicle behind with the pair quickly exchanging insults.

Violent brawl: Two mothers, pictured above, were recorded slapping and choking one another after a road rage row escalated in Northampton on Tuesday afternoon 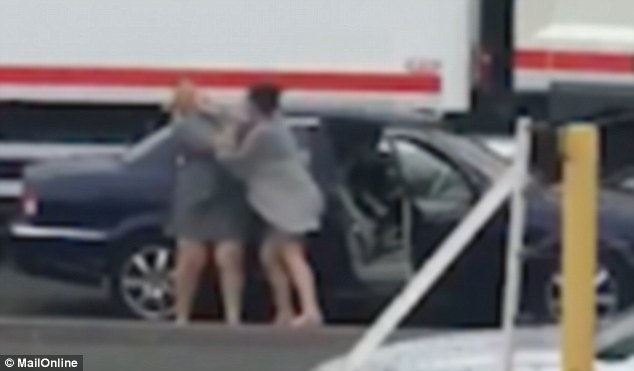 Enemy’s choke-hold: The women hold each others’ throats in vice-like grip at the row escalated

A witness told MailOnline the brunette was accusing the Jaguar driver of ‘cutting her up’.

Their dispute descended into a shocking display of violence with an onlooker capturing the moment on film.

In footage obtained by MailOnline, the clip begins with the pair wrestling in the middle of a carriageway as their cars stop the flow of traffic.

The women can be seen holding each other in choke-holds until the brunette finally succumbs to the elder woman’s strength and goes tumbling to the ground.

Meanwhile cars passing in the opposite lanes beep their horns and call for them to stop but to no avail.

The brunette, wearing a dress, is then bodyslammed into the road which has been temporarily blocked by their brawl. 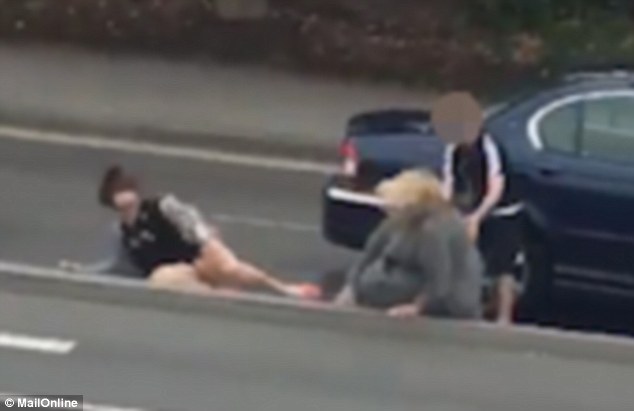 Road rage: The elder fair-haired driver of the Jaguar used her full body weight to shove the brunette women into the temporarily blocked carriageway as a child begged them to stop 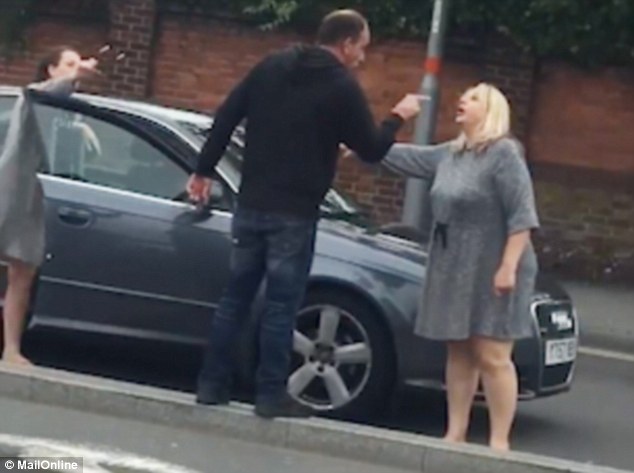 Shooting the messenger: The blonde-haired woman appears to turn on a man who tried to break up the fracas

The fair-haired mother appears to be held back momentarily by a young boy begging her to stop.

The dark-haired woman then appears to shout: ‘I’m f****ing late’ before staggering back to her own saloon car, parked just behind.

As the brunette makes her way back to the car she followed again by the Jaguar motorist who points in her face. The pair begin slapping each other.

The scenes were described as ’embarrassing’ by one witness who said he was appalled. 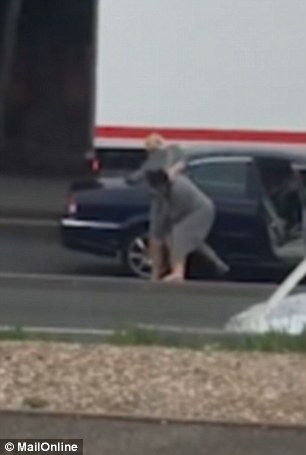 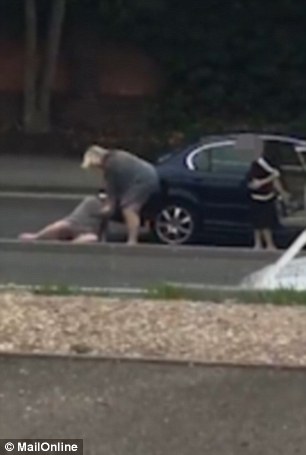 The brunette, wearing a dress, was filmed being body-slammed to the ground by the blonde driver of a blue Jaguar

Another said the incident was ‘shocking’. A man in the background of the footage can be heard shouting: ‘Get back in your car!’ in a bid to quell the dispute.

Speaking to MailOnline, the man said: ‘We were over the road when we could suddenly hear screaming and shouting. We went out to see what was going on and the two of them were fighting. The brunette woman was accusing the blonde one of cutting her up.

‘The blonde one apparently slammed on her breaks and got out of the car, raising her voice. She pinned her up against the car and the next thing you know they were fighting. The blonde woman strangled her down to the floor.

‘I couldn’t believe what I was seeing, I was a bit shocked to be quite honest.’

‘One of the women’s children was crying saying, “please stop it mum”.

‘People tried to intervene to get them to stop. A man nearby said he would sort it out.’

The identities of the two women are not yet known. It is not known if the police have been alerted.

The incident happened on Tuesday afternoon just before 3pm on St Peter’s Way in Northampton.