Two of George Formby’s treasured ukuleles are expected to fetch at least £30,000 at auction

Two of George Formby’s treasured ukuleles are expected to fetch at least £30,000 at auction

He is remembered for his toothy grin and ukelele-powered classics such as When I’m Cleaning Windows.

Now two of George Formby’s treasured banjo ukuleles are among a collection expected to fetch at least £30,000 at auction.

The singer, actor and comedian, from Wigan was Britain’s highest paid entertainer in the 1930s and 40s.

A collection of items relating to George Formby, including a photo of him with actress Florence Desmond, is expected to sell for at least £30,000 at auction

A life-sized model of the star, who died in 1961 aged 56, is also in the collection of memorabilia which includes a letter Formby sent to two musicians in 1936 complaining about overly sexy songs they had written for him.

The ukuleles played by Formby, whose other hits included Leaning On A Lamp-Post, could each fetch up to £15,000 in the online sale on Thursday. 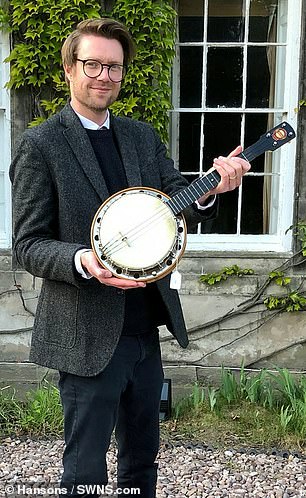 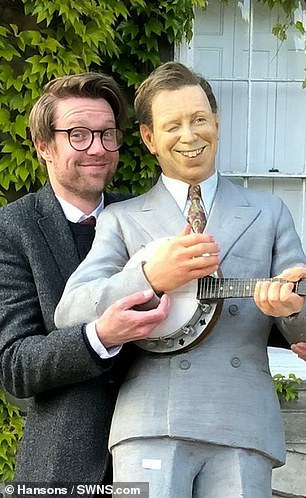 Jim Spencer, of auctioneers Hansons, says the memorabilia collection, which includes two of the Wigan star’s treasured banjo ukuleles (left) and a life-sized model of the singer (right), is a ‘hugely important private collection’

Mr Spencer added: ‘In his heyday, Formby was the UK’s highest paid entertainer. He was renowned for his light-hearted, comical songs, accompanied by the ukulele or banjolele.

‘We’re proud to be selling this important collection and hope to honour George Formby’s legacy.

‘When I collected the objects, I had no space left for the life-size figure of George, so the vendor encouraged me to strap him into passenger seat.

‘It was the only option. So, I had a four-hour drive back home with other motorists thinking I had a pretend twin brother keeping me company.’