Two people are shot during high-speed police chase near the NSW-Victoria border.

Two brothers shot by police near a campground after a high speed chase have links to bikie gangs and terror groups, it has been revealed.

Counter-terror cops attempted to stop a car near Richardsons Bend Camping Ground, west of Wodonga on the border between Victoria and New South Wales, at about 3.30pm on Wednesday.

The two men, aged 19 and 30, converted to Islam in prison and are low-level people of interest to counter-terrorism police.

The driver of the vehicle rammed the police car and violence exploded after the men jumped out wielding a knife and an axe, the Herald Sun reported.

Counter Terrorism Command (CTC) and the Victorian police attempted to intercept a vehicle containing the two men on Old Barnawartha Road, near Richardsons Bend Camping Ground (pictured) at about 3.30pm on Wednesday 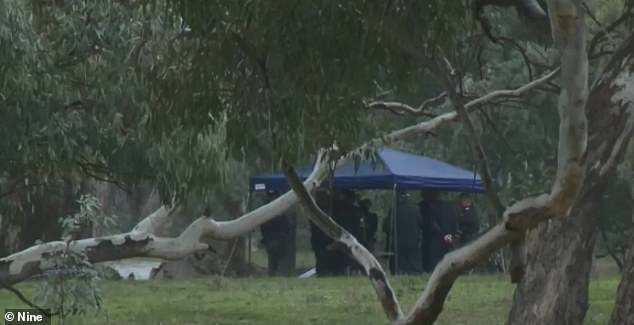 The driver of the vehicle rammed the police car and violence exploded after the men jumped out of the vehicle wielding an knife and an axe, the Herald Sun reported (pictured, police tent at the scene)

As police approached the men, one of them moved towards an officer and he was shot.

Police attempted to negotiate with the second man, but he refused to put down his weapon.

Officers sprayed him with capsicum spray and tasered him but neither had any effect and he was then shot.

Detectives from Counter Terror Command were in north-eastern Victoria gathering information when they sought help from local police to locate the two men.

The two men are believed to be from NSW but recently relocated to Victoria.

Both men have been taken to hospital with serious injuries but Ambulance Victoria was unable to provide details about the men’s injuries or the hospital they were taken to.

A spokesman from Victoria Police said: ‘The investigation is ongoing and more information will be provided once it comes to hand.

‘There is no threat to the community.’

The incident is not being treated as a terrorism-related attack.

When police approached one man moved towards them and he was shot. Police attempted to negotiate with the second man, but he refused. He was sprayed with capsicum spray and tasered but when neither of these methods had any effect, the police also shot him. (pictured, the Murray River Reserve where the shooting took place)

June Chilvers, a woman who lives near the incident, said she saw at least four police cars speed past her property this afternoon.

‘I saw them fly along, four cars,’ she said.