5.30pm: Trump briefly leaves his hospital room at Walter Reed Medical Center in an SUV with the Secret Service to go for a drive and thank supporters. Secret Service agents in the front seat are seen in full PPE, including gowns, and will have to quarantine for 14 days after the drive. Trump sat in the back seat with a mask on

6.20am: Trump goes on all-caps Twitter tirade while at Walter Reed Medical Center.

The tweet storm lasts about an hour as he called for ‘LAW & ORDER’ and ‘RELIGIOUS LIBERTY’ while urging his supporters to ‘VOTE!’

3.20pm: Trump’s team of doctors give a press conference outside of Walter Reed Medical Center where they give a general update on the president’s condition

Dr. Sean Conley resufes to give the results of a lung scan or reveal when he last tested negative for coronavirus, citing patient privacy laws. He calls Trump a ‘phenomenal patient’

6.23pm: ‘Will be back on the Campaign Trail soon!!! The Fake News only shows the Fake Polls,’ Trump tweets

6.40pm: Trump boards Marine One with a wave, a thumbs up and a fist pump after being hospitalized over the weekend

He has been given at least three potent drugs, including Regeneron’s cocktail of lab-made antibodies, the antiviral remdesivir, and the steroid dexamethasone

6.45pm: Helicopter takes off from the Bethesda, Maryland facility and flies back to the White House

6.55pm: Trump arrives at the White House and takes off his mask for a photo opp as he waves and salutes the crowd. Two photographers in masks are seen near the president as he stands on the balcony.

Trump, 74, appears to be grimacing and taking labored breaths as he stood on the White House balcony, with one doctor saying he was ‘clearly in some distress with his breathing’ 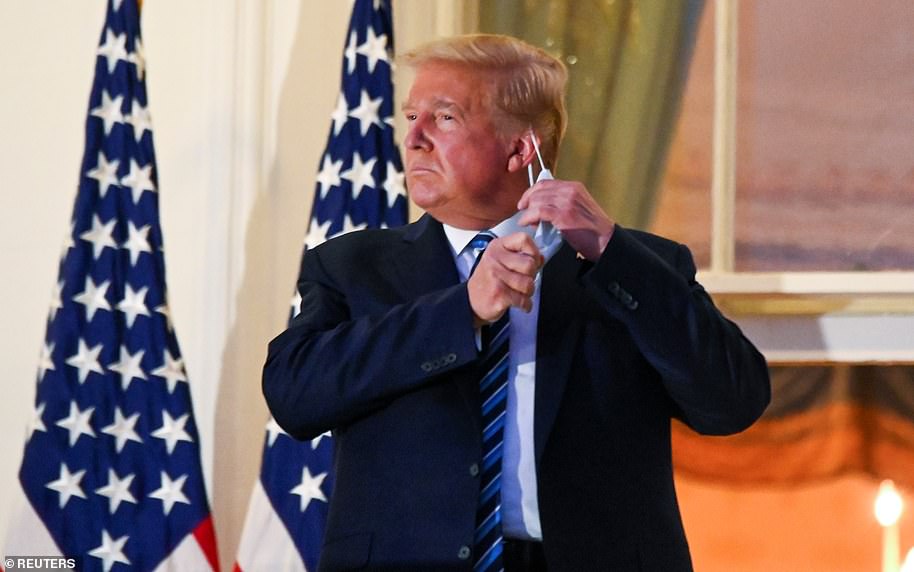 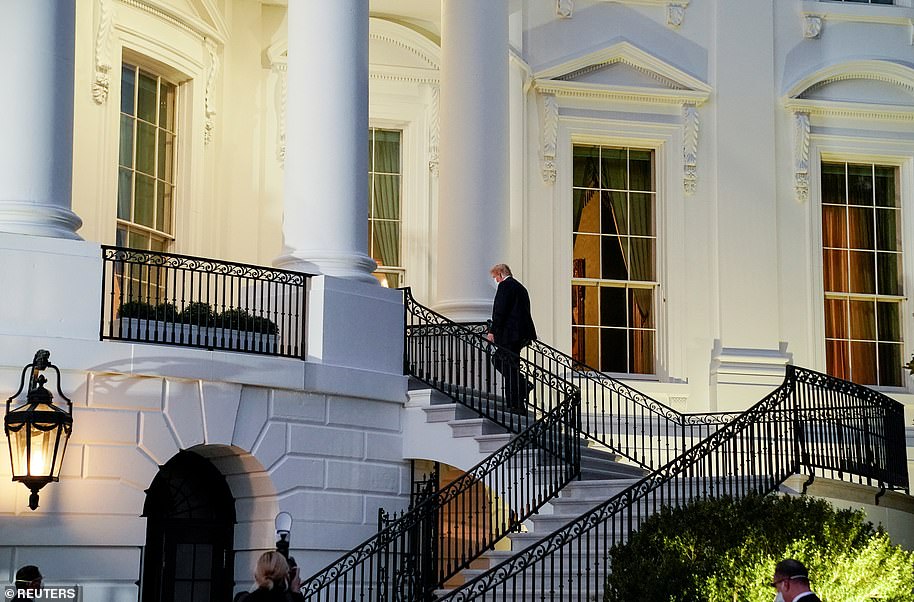 7:59pm: Trump releases a video on Twitter, saying ‘Don’t be afraid of COVID, don’t let it dominate your life. I went, I didn’t feel so good, and two days ago – I could have left two days ago – two days ago, I felt great, better than I have in a long time. I said just recently, better than 20 years ago’

Trump claimed that he could even be immune to COVID-19 and said, ‘As your leader I had to do that. I knew there’s danger to it but I had to do it. I stood out front, I led. Nobody that’s a leader would not do what I did.

‘I know there’s a risk, there’s a danger but that’s okay. And now I’m better and maybe I’m immune, I don’t know.’ 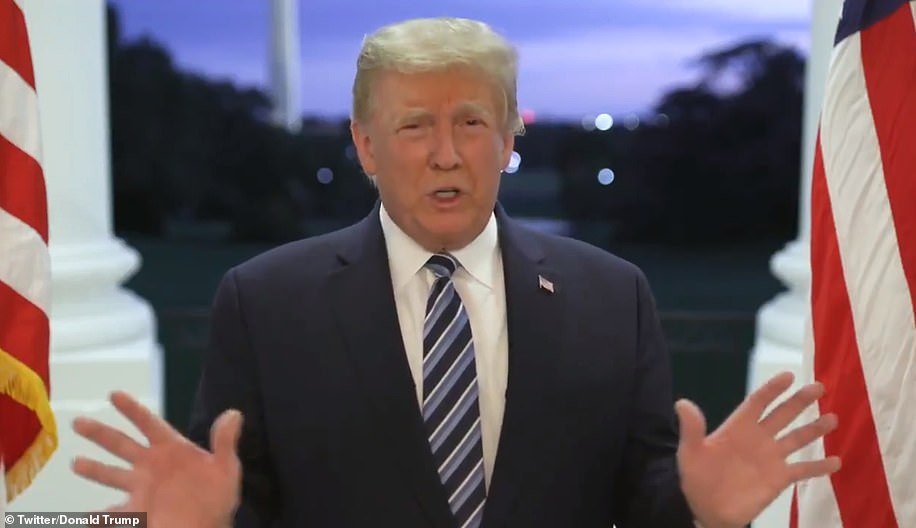 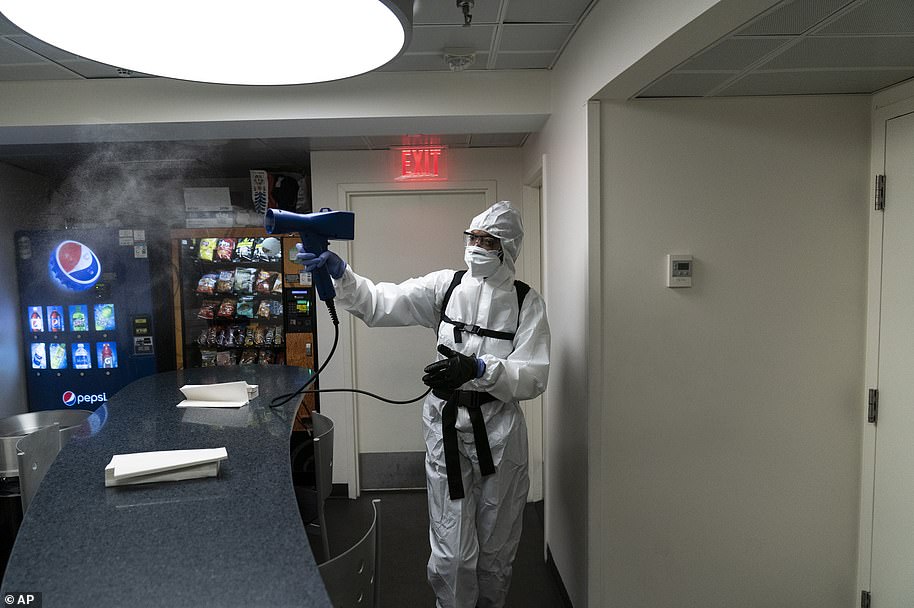 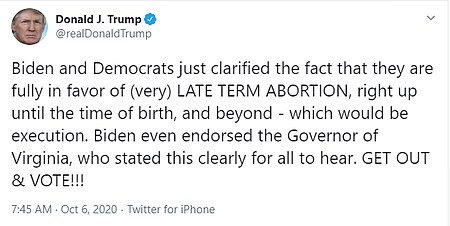 7.39am: Trump tweets about opponent Joe Biden saying he ‘took a more Liberal position on Roe v. Wade than Elizabeth Warren at her highest’ and wants to ‘PACK our great United States Supreme Court’

7.45am: The president continues his attack on Joe Biden and the Democrats saying that they are ‘fully in favor of (very) LATE TERM ABORTION, right up until the time of birth, and beyond – which would be execution’

‘Biden even endorsed the Governor of Virginia, who stated this clearly for all to hear. GET OUT & VOTE!!!’

10.42am: Trump says he is ‘looking forward’ to the debate with Joe Biden next week, on October 15th, in Miami. ‘It will be great!,’ he writes. He has still not fully recovered from the coronavirus

2.48pm: Trump sparks a panicked stock market sell-off after he tweeted that he would not allow talks on a stimulus plan to go on before the November election.

‘I have instructed my representatives to stop negotiating until after the election when, immediately after I win, we will pass a major Stimulus Bill that focuses on hardworking Americans and Small Business,’ he writes