A Russian submarine carrying land attack missiles has been intercepted in the English Channel by two Royal Navy warships.

The Krasnodar sub was spotted passing through the Dover strait, close to UK waters.

It is feared it may have breached treaty rules that forbid the route except for exceptional repair reasons.

It comes as a bombshell report by the UK government’s Intelligence and Security Committee accused Russia of meddling in Britain by interfering in the 2014 Scottish Referendum, flushing dirty money through London and conducting cyber warfare.

The vessel, built in the Soviet Union for the Soviet Navy in the 1980s, was met by Royal Navy patrol ships, HMS Tyne and HMS Mersey.

The Krasnodar submarine was sailing from the Eastern Mediterranean with its ocean-going tug Sergey Balk in support. 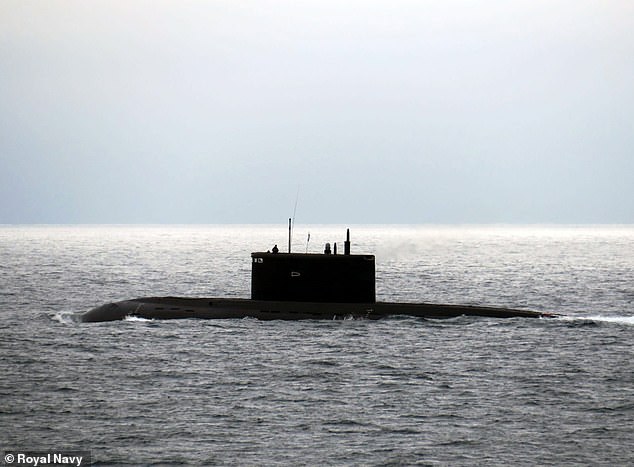 HMS Tyne, based in Portsmouth, picked up the sub at the south-western end of the English Channel after the French Navy tracked its journey through the Bay of Biscay.

After sailing the Channel, sister ship HMS Mersey took over duties as the Russians headed through the Strait of Dover and into the North Sea on Monday.

It may have breached the Montreux Convention which stops submarines and boats going through the Bosphorus Straits, from the Black Sea to the Mediterranean, unless heading for repairs.

Lieutenant Justin Shirtcliff, HMS Tyne’s Operations Officer, said: ‘Tyne responded in a coordinated effort with allies to shadow the Russian submarine and her escort while transiting the English Channel.

‘This routine undertaking is an enduring task for the Royal Navy, in which Tyne and her sister ships of the Royal Navy’s Overseas Patrol Squadron play a key role.’ 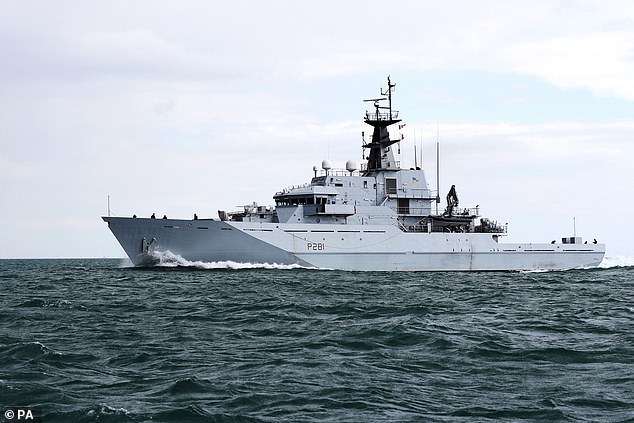 The passing of the Krasnodar comes just two weeks after Russian warships – including the submarine-hunting destroyer Vice Admiral Kulakov – were shadowed through the Channel.

Lieutenant Commander Will Edwards-Bannon, HMS Mersey’s Commanding Officer, said: ‘It has been impressive to see, first-hand, the seamless coordination between allied ships and aircraft from various nations involved in this operation.

‘I am very proud of the disciplined way in which my ship’s company has responded to the challenge of maintaining our readiness for operations through the challenges of Covid-19 which, along with the support we receive from our families, has enabled Mersey to once again successfully play our part in protecting our nation’s interests.’

The Kilo Class attack submarine had been tracked by open-source intelligence analysts from Syria to a point near start of the English Channel, roughly level with Land’s End, according to PlymouthLive.

It came hours before the Intelligence and Security Committee published its report into allegations of Russian interference in the EU referendum.

The document said the UK government “badly underestimated” the threat and what it should do to tackle the problem.

It accused them of “playing catch-up” and should have taken “immediate action”.