This is the shocking moment two thugs shoot and kill a duck with a catapult and steel balls.

The two youths are seen walking on a towpath, and then stopping to take aim at the ducks.

The bullet makes contact with one duck and is seen swimming around dazed, whilst other duck flies away to safety.

Karen Dunn, 52 caught the incident on her home CCTV. Her house backs onto the Chesterfield Canal, Linconshire.

Ms Dunn, who lives with husband Gary, 54, noticed the incident and Gary went to out tell the youths to stop but they had already run off.

The pair had to fish out the duck from the canal after it suffered severe injuries to its head.

Ms Dunn said: ‘Our garden backs onto the canal where the incident took place. Our CCTV capture the whole thing.

‘We were in our kitchen when it happened, the kitchen faces the canal too.

‘I saw the two youths walking down the towpath, and saw them throwing something into the canal.

‘I thought they were throwing bread like anyone else would do to ducks.

‘But when I did a double take I noticed they were shooting at the ducks with a catapult.

‘My husband ran outside to tell them to stop and move on, but by the time he got there, they were already running away.

The two youths are seen walking on a towpath, and then stopping to take aim at the ducks

‘There is an award winning park next to the canal, and the towpath is always full of people enjoying the scenery and wildlife.

‘People come here with their families or even to just walk their dogs.

‘The poor duck had a hole in its head and lost one of its eyes, you could see it swimming around dazed and distressed.

‘It was only swimming on one leg, me and my husband called the RSPCA for advice on how to help the duck.

‘They told us, to get it out of the water and put it into a cardboard box with holes in it and put blankets in the box.

‘The duck was still shacking from the incident and it was in agony, there was also blood all over the place from its injuries. 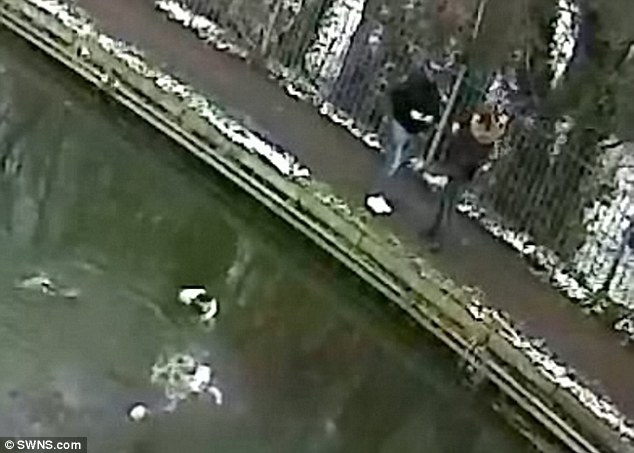 The bullet makes contact with one duck and is seen swimming around dazed, whilst other duck flies away to safety

‘We kept it over night as the RSPCA couldn’t get out because of the snow, but the next morning at around 10am, they came out and collected the duck.

‘We received a call from the RSPCA later that same day and they told the duck had sadly died.

‘It had to be put down because of the severity of its injuries.

‘I would like to know from those responsible, just why?

‘What on earth would possess you to do such a thing, it’s a mindless act.

‘One of them had his phone out and actually filmed the incident, whilst the other took the shot with the catapult.

‘If they can do that to a defenceless animal, then who knows what else they’re capable of.’