Two-time cancer survivor Robin Roberts opens up about her health

Robin Roberts has opened up about reclaiming her life after beating both breast cancer and a rare bone marrow disorder called myelodysplastic syndrome.

The 59-year-old Good Morning America anchor discussed her two cancer journeys on Wednesday’s episode of The Dr. Oz Show, telling the host that she wants to show people that she is thriving.

‘Oh, praise God I’m doing as well as I am. I am so incredibly grateful to the doctors, the nurses, the technicians who still to this day keep an eye on me,’ said Robin, who also celebrated her 30-year anniversary at the Walt Disney Company on Wednesday. 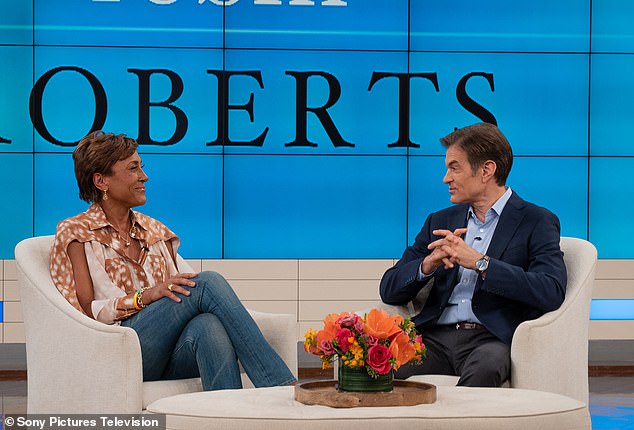 Vigilant: The Good Morning America anchor said she now goes for regular checkups, meditates, and watches what she eats to keep her health in check

‘I do my due diligence. I go for my regular checkups. I have started meditating. I watch what I eat more so than I did before. All those things that I need to do,’ she explained. ‘But I want to be a symbol to people that this too shall pass.’

Robin fought and overcame an early form of breast cancer in 2007. Five years later, she was diagnosed with myelodysplastic syndrome (MDS), a disease in which the bone marrow does not make enough healthy blood cells.

She underwent several sessions of chemotherapy, and on September 20, 2012, she had a bone marrow transplant from her sister Sally-Ann before returning to Good Morning America that February.

‘I don’t compare my despair with anyone,’ she told Dr. Mehmet Oz. ‘I know that everybody has a path that they’ve gone through. 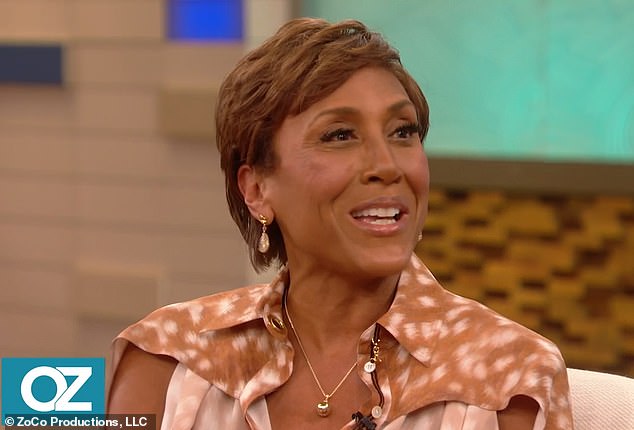 Inspiration: The journalist said she doesn’t want to be a survivor; she wants to ‘thrive’

‘During the commercial break, I was speaking to a young woman up there whose mother is going through this,’ she said. ‘I just want to hug her and tell her, “Tell your mom that we’re all stronger than we think we are.” 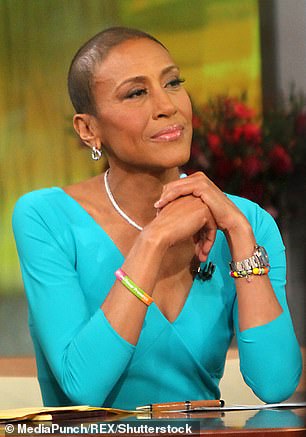 Fighting for her life: Robin beat breast cancer in 2007. Five years later, she was diagnosed with MDS, a disease in which the bone marrow does not make enough blood cells. She’s pictured after she returned to GMA in 2013 following her bone marrow transplant

Robin recalled how her mother, Lucimarian Tolliver, told her to ‘make your mess your message’ when she was first diagnosed with breast cancer.

‘I remember my mom first told me that when I was diagnosed with cancer and I was like, what is the message here?’ she said. ‘It was about early detection because I found I was triple negative, but because I had, through self-detection, found the lump. I just told people that early detection is not a guarantee but it increases your chances.

‘Then, when I received the diagnosis with myelodysplastic syndrome, which is a bone marrow disorder, I was like, what is the message here?’ she continued. ‘I didn’t realize that people were not aware to join the registry and to be a donor.’

‘So I got the message out there. But my message has been, and what I’ve always made my message is resiliency.’

When Robin announced on-air that she was sick with MDS, there was a 1,800 per cent spike in donors on the website for Be the Match, a nonprofit that has a national bone marrow donation registry.

While speaking to Dr. Oz, journalist also shared how vulnerability has been therapeutic for her during her health journey. 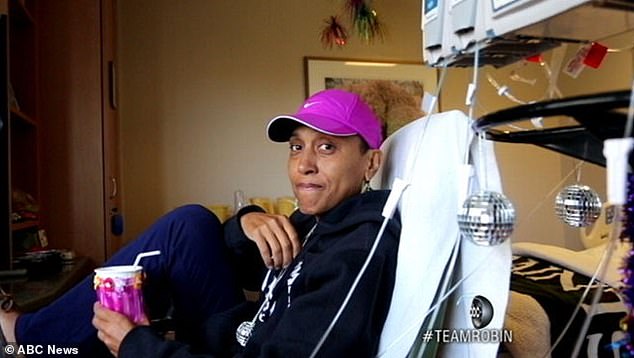 Hero: Robin publicly battled MDS and used her platform to urge people to become bone marrow donors. Footage from her own bone marrow transplant aired on ABC in 2012 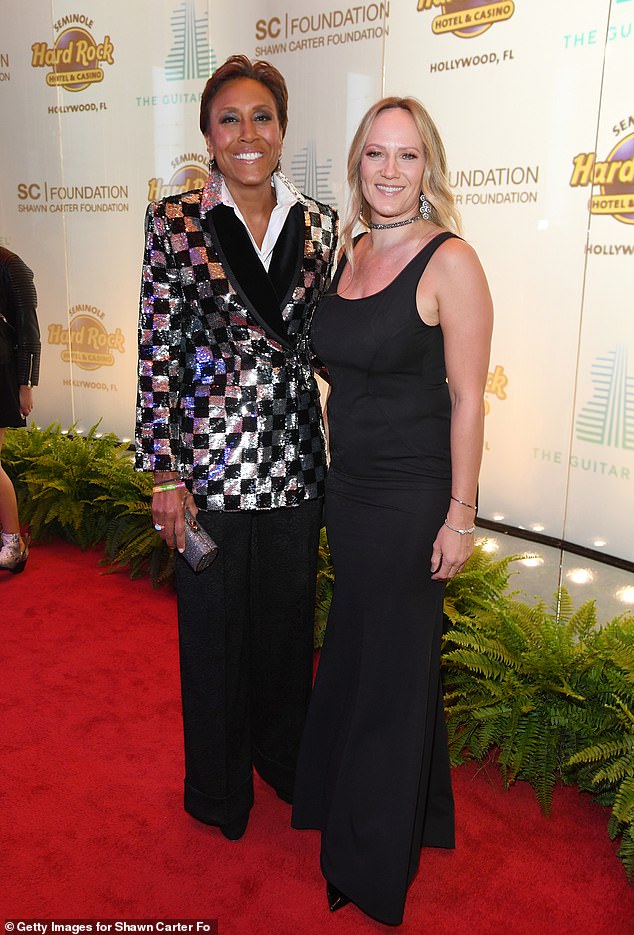 Feeling great: Robin is pictured with her longtime partner, Amber Laign, at the Shawn Carter Foundation Gala in November

‘Vulnerability. Why do we shy away from that? Why do we do that?’ she asked.

Robin said that in the early days of her career, journalists refrained from talking about their personal lives and shared only the facts, but she allowed herself to be vulnerable when Hurricane Katrina wiped out her hometown of Pass Christian, Mississippi, in 2005.

Robin explained that she had just joined GMA as a full-time host with Charlie Gibson and Diane Sawyer and was doubting her decision when she had to report live from the Gulf Coast the next day.

‘I’m in the big leagues now with them and in my mind, I have that little self-doubt, “Why have I left ESPN and my sports world? Is this the right move?”‘ she recalled thinking. ‘I’m there on the Gulf Coast, Katrina has blown through and I cried.’ 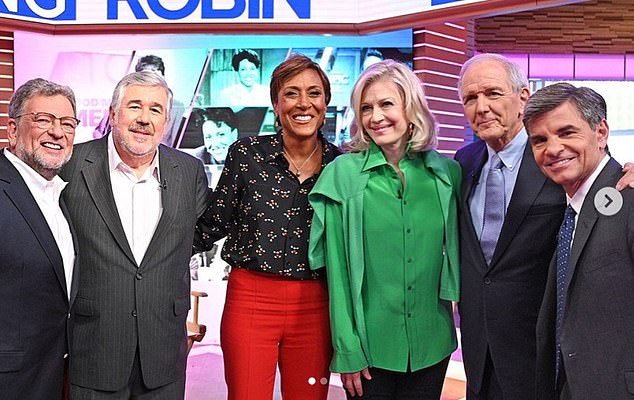 Happy days: Robin celebrated her 30-years at the Walt Disney Company on Wednesday, and was surprised with a visit from Diane Sawyer (center) and Charlie Gibson (second from right) 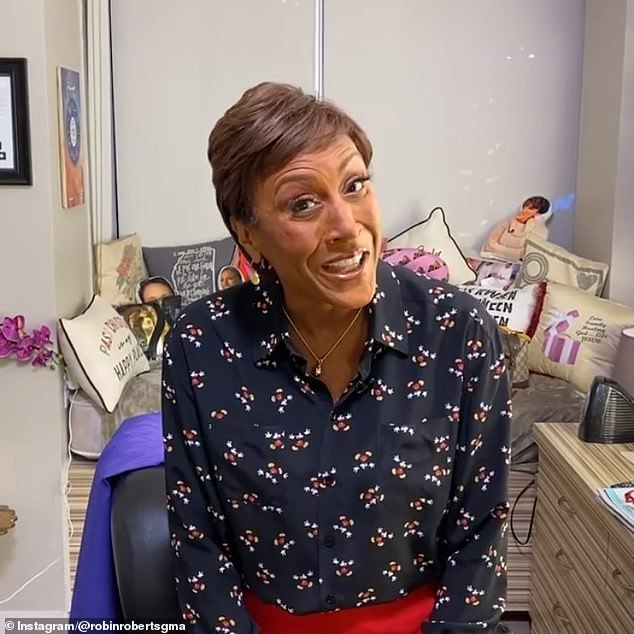 Anniversary: The seasoned TV host shared a video of herself thanking her colleagues and fans for their support that day 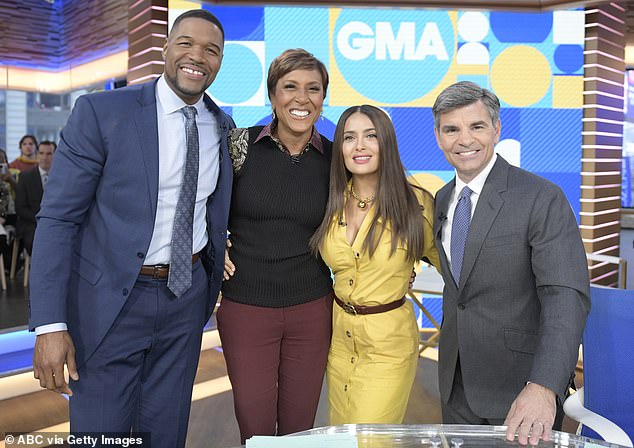 Looking back: The journalist started working as a sportscaster on ESPN on January 15, 1990 and spent 15 years there before she became a co-anchor at GMA in 2005

It’s an exciting week for Robin, who celebrated 30 years with the Walt Disney Company on Wednesday. She started working as a sportscaster on ESPN on January 15, 1990 and spent 15 years there before she became a co-anchor at GMA in 2005.

Before Wednesday morning’s show, she took to Instagram to share a video of herself thanking her colleagues and viewers for their support over the years.

‘Thirty years ago today, I started working for the Walt Disney Company. The first 15 years at ESPN. Fifteen years and counting here at ABC,’ she said. ‘It’s humbling that that milestone’s going to be recolonized this morning on the show.

‘Believe me, I know there are far more important issues to discuss, but I am so grateful for the opportunity to say thank you to my colleagues, executives both former and current,’ she continued.

‘And to say thank you to you, the viewer. Thank you. Thank you for welcoming me into your home, your lives, and hopefully into your hearts because you’re in mine. And as Walt Disney himself said, “If you can dream it, you can do it.” I’m still dreaming. I hope you are too.

Later, when she was honored on GMA, she showed her thanks again, saying: ‘My mom always used to say, “You can’t put a limit on gratitude.”‘