A man and woman fell to their deaths Friday morning while hiking a trail near the world famous Delicate Arch, at Arches National Park in Moab, Utah.

The victims, a 60-year-old woman and 65-year-old man, fell into the lower bowl near the renowned arch, Chief Ranger Scott Brown said. They were found dead at the scene by rescuers.

A 30-year-old man was airlifted to a hospital. His condition is not known.

While it’s not clear if weather played a factor, Brown said the accident happened in wet and slick conditions and was reported at 7:30 a.m.

The world famous Delicate Arch within the Arches National Park in Moab, Utah, where three people from California fell while hiking the trail. Two of victims were killed 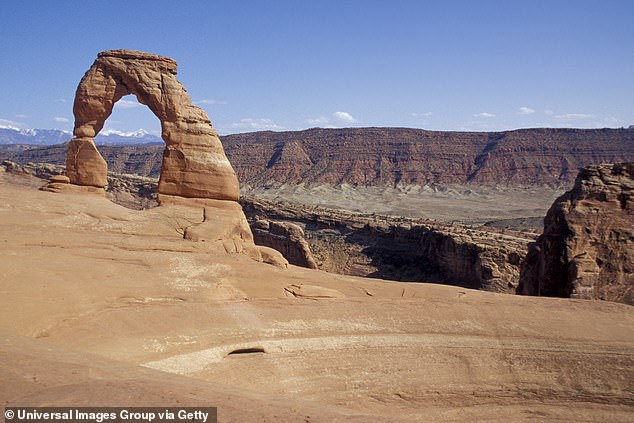 A 60-year-old woman and a 65-year-old were found by rescuers dead at the scene Friday. A 30-year-old man was airlifted to a hospital was unknown injuries from the same hike

The trail leading to Delicate Arch was closed briefly during the investigation. When reopened to the public, the park tweeted, ‘Winter conditions make for slippery hiking; proceed with caution.’

The accident is under investigation by the Grand County Sheriff’s Office.

All three victims’ names were not released, but authorities believe the family is from California.