Two carers who were caught on camera slapping bed-bound dementia-sufferer, 85, and taunting her with cup of tea as she helplessly sobbed are spared jail

An elderly bed-bound woman with dementia suffered at the hands of two carers who had no formal qualifications, a court has heard.

Zaria Bi, 48, raised a clenched fist and threatened the 85-year-old woman at her home in an attempt to get her to drink a cup of tea, the court heard yesterday.

She also suspended the cup over the woman’s head and threatened to call the police if she failed to drink it.

Her colleague, Farzana Bibi, 41, slapped the woman on her arms in footage recorded on CCTV fitted in the woman’s bedroom by her daughter, who had become concerned by her mother’s behaviour.

An elderly bed-bound woman with dementia suffered at the hands of two carers who had no formal qualifications, a court has heard (stock photo)

The only training they had was shadowing other carers, the court was told.

In the footage, described by prosecutor Melanie Ibbotson, the victim was seen sobbing and telling the two carers to leave.

Miss Ibbotson, who said the behaviour of the women should be seen as a disability hate crime, said a member of social services described their actions as ‘disgusting and shocking’.

The woman required four visits during the day, and one in the evening, and Bi and Bibi had been carrying out some of the visits for 18 months up to October, last year.

Both women, of previous good character, admitted assaulting the woman at her home in Keighley, West Yorks., on October 22 and were sentenced to a 12 month community order with 200 hours unpaid work, as a direct alternative to custody.

They were also ordered to pay compensation of £250 each. 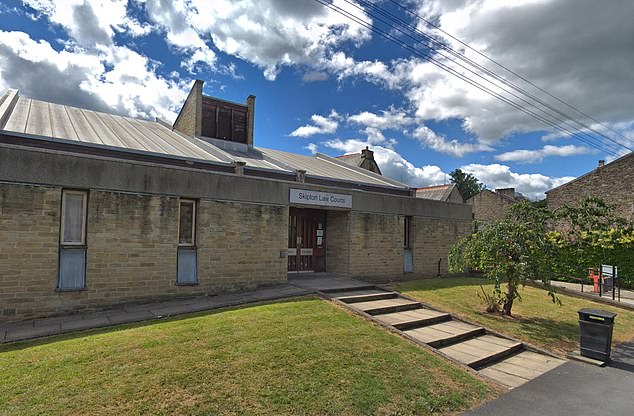 Skipton Magistrates Court heard in mitigation that both women had been ostracised following their first appearance in court and had been fearful of being sent to prison.

Sabeeha Khan said her clients had developed a rapport with the woman in their care and had wanted to make sure she had plenty to drink and eat.

Miss Khan denied they were guilty of disability hate crime and that the fact the woman had vascular dementia was incidental.

She added the only training they had had been to shadow other carers – a fact that she had found surprising.

In a statement read out in court, the woman’s daughter said she had been shocked and disgusted by the behaviour of the carers and had felt guilty that she had not known it was going on.

She said she could not imagine how her mother would have felt, but that her mother was now happy again, and back to her normal self.

Magistrates told Bi, of Keighley and Bibi, of Keighley, that what they had done had crossed the custody threshold, and that they had demonstrated hostility to the victim, both in the language they had used, the use of clenched fists, and threats.

The assaults had also been carried out in the woman’s own home, which was an abuse of trust.

The community order, they said, was a direct alternative to custody.

The 12 month community sentence also requires the women to complete up to 20 rehabilitation activity requirement days and prohibits them from paid work caring for vulnerable adults.