Two male walkers die after falling up to 1,000ft on Highlands mountain Ben Hope – as deaths on Scottish peaks reach six so far this winter

Two walkers have died after falling 1000ft from a mountain in the Highlands.

Concerns were raised for two men in difficulty on Ben Hope in Sutherland on Tuesday and a search operation was launched.

A coastguard helicopter crew discovered the bodies on the north-west side of the mountain shortly after 2am this morning. Police say efforts are ongoing to recover the bodies.

They are at least the sixth deaths on Scotland’s mountains this year – all but one of them walking or climbing accidents.

The pair were on 3041ft high Ben Hope, pictured, about six miles south west of Tongue

No contact had been made with the pair after their initial call for help around 3.30pm. At least one of the men fell around 1000 ft.

The injured pair were on 3041ft high Ben Hope, about six miles south west of Tongue, when the alarm was raised at 3.46pm.

The Stornoway-based search and rescue helicopter was sent to the scene together with Assynt Mountain Rescue Team.

But the helicopter returned to base at around 7pm – with lightning hampering the operation – and rescuers battling the darkness and driving rain and snow.

‘Sadly the bodies of the two men were discovered on the north-west side of Ben Hope shortly after 2am on Wednesday by the helicopter crew,’ said a spokesman.

‘Both bodies currently remain on Ben Hope and efforts are ongoing to recover them.’

Inspector Kevin Macleod said: ‘Our thoughts are with the family and friends of both of these men at this tragic time.

‘I would also like to pass on our gratitude to the volunteers of Assynt Mountain Rescue Team for their efforts in extremely challenging conditions.’

A spokeswoman for the Maritime Coastguard Agency said the initial reports were that at least one of the hikers had fallen between 200 to 300 metres (656ft to 984ft) and that they had raised the alarm by mobile phone. At least one of them had suffered back injuries.

Ben Hope is the most northerly of the Munros – Scottish mountains over 3000 ft – and its fine isolated peak is a magnificent viewpoint and a magnet for hikers, especially in summer.

Among those to have tackled it in recent years is TV comedian Ed Byrne who  linked up with Scottish Mountain Rescue to pass on life saving tips about being prepared for Scotland’s mountains in winter. 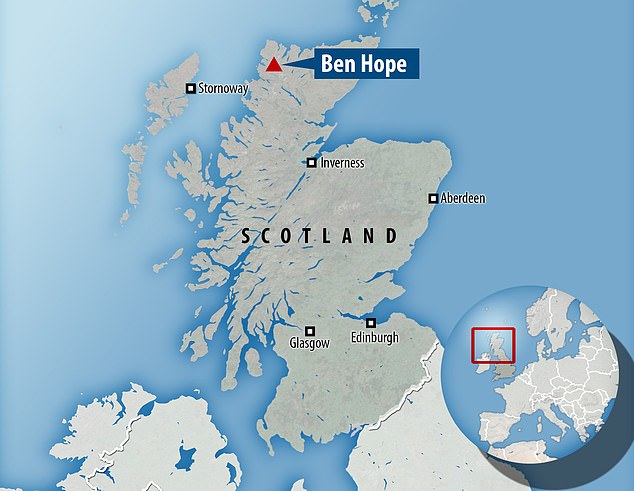 There have been six fatal falls from Scottish mountains already this year. Pictured: Ben Hope

In winter Ben Hope can be particularly treacherous.

There have been at least six deaths this winter on Scotland’s peaks. Ten people died in Scotland’s hills in the first three months of last year.

A woman climber died after falling from Ben Nevis on New Year’s Day. The 21-year-old from Germany was a student, who was studying at the University of Bristol.

She climbing with three others on Ben Nevis when she plunged 500ft (152 metres) from the Carn Dearg Buttress. The woman and her friends had been climbing what is known as the ‘ledge route.’

It was the second recent death of a student on Britain’s highest peak – Patrick Boothroyd, 21, from West Yorkshire, died in a fall on December 16.

Cardiff University students Patrick Boothroyd and Leo Grabowski were scaling Tower Gully when a ledge of snow collapsed, causing them to fall 1,500ft.

Despite being dazed and disoriented, the 28-year-old immediately rang 999 and did his best to help his friend.

He covered him with a survival bag and huddled next to him, shielding him from the snow and wind. They were rescued after an hour but Mr Boothroyd could not be saved.

What were the deaths in Scottish mountains this winter?

A man fell to his death while climbing 3,143ft Buachaille Etive Beag – between Glen Coe and Glen Etive.

Patrick Boothroyd, 21, from West Yorkshire, died in a fall on Ben Nevis.  He fell 1,500ft down Britain’s biggest mountain with his friend Leo Grabowski, who miraculously survived the fall. They fell when an overhanging ledge of ice and snow is believed to have collapsed on top of them.

A female climber, aged 22 after a 500ft ‘horrific’ fall down Ben Nevis on New Year’s Day.

The Bristol University Student was on the Ridge Route between the summit of neighbouring Carn Dearg and Ben Nevis on a climb with three others.

Two walkers died after falling 1000ft from a mountain in the Highlands.

Concerns were raised for two men in difficulty on Ben Hope in Sutherland on Tuesday and a search operation was launched.

A coastguard helicopter crew discovered the bodies on the north-west side of the mountain shortly.