A two-week-old baby boy ended up on life support just hours after being diagnosed with a common cold.

After noticing her son was suffering from a high temperature and runny nose, Finley’s mother, Clare, went to her GP who sent the worried parent back home with some paracetamol.

Yet, overnight, Finley’s condition worsened, ‘On the Friday night he didn’t sleep, he wouldn’t have bottles, he was just screaming,’ said Clare, 25.

‘In the morning he was still screaming and the skin on his hands and arms and legs was quite mottled so I rang 111.’

Clare was advised to rush Finley to the University Hospital of North Tees in Stockton.

‘At first they were saying they didn’t know what it was. It was very stressful. They did some tests and put a drip in his arm,’ she said. 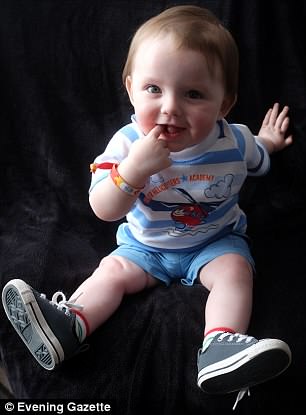 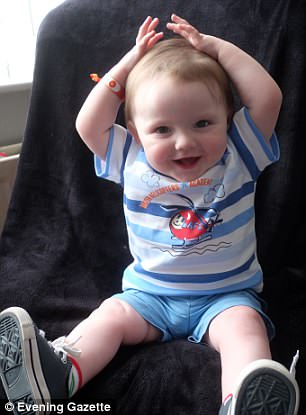 Thankfully, the infection was caught in time and Finley is now almost one in age (pictured)

Finley was given antibiotics and kept in hospital for the next week. But his condition drastically worsened on the following Monday.

‘At 5am on the Monday they rang and said “you had better come in” because he wasn’t breathing properly.

‘When he went to sleep he kept stopping breathing. He went in an induced coma at 11am and went straight to the RVI in Newcastle,’ said Clare.

It was there that doctors informed the worried mother that her newborn son had sepsis. The condition is a rare but serious complication of an infection.

Without quick treatment, it can lead to multiple organ failure and death.

‘A lot of people we have spoken to don’t know what sepsis is. I knew nothing about it,’ said Clare. He enjoys playing with his older brothers Layton, nine, and five-year-old Harley and is reaching all his milestones (pictured together with his mother Clare)

‘They said if we hadn’t taken him in on the Saturday we would have lost him, it was that bad. He would have died in his sleep. I couldn’t eat, couldn’t sleep, it was awful.’

Finley was put on life support and fortunately with treatment, he began to improve. By the Tuesday, the little fighter was able to return home.

Finley is now almost one and, although he receives check-ups, the little boy is thriving.  He enjoys playing with his older brothers Layton, nine, and five-year-old Harley and is reaching all his milestones.

‘Go straightaway if you any concerns, it’s better to be safe than sorry,’ she said. ‘I was told it was a viral infection and basically it was Finley just getting used to the world.’

Sepsis, also known as blood poisoning, occurs when the body reacts to an infection by attacking its own organs and tissues.