Two women die ‘needlessly’ of a heart attack every day because doctors think it’s a ‘man’s disease’ and they get worse treatment, experts warn

At least two women die ‘needlessly’ of a heart attack every day because men get better medical care, experts warn.

A report by the British Heart Foundation today reveals stark differences in how the sexes are looked after due to the mistaken belief that heart attacks are a ‘man’s disease’.

The BHF found that women get treated slower, are less likely to receive life-saving scans and tests, and, even when they are discharged from hospital, many are not provided with vital drugs or access to rehabilitation programmes.

The charity’s researchers estimate that 8,243 women in England and Wales have died over a ten-year period – the equivalent of 69 a month, or more than two a day – who would have survived if they had received the same care as men.

‘et women are dying needlessly because heart attacks are often seen as a man’s disease, and women don’t receive the same standard of treatment as men.’

The report reveals that when women have a heart attack they often delay seeking help – taking up to seven hours and 12 minutes to arrive at hospital, compared with three hours and 30 minutes for men.

In addition, doctors are far more likely to miss their symptoms. A woman is 50 per cent more likely to initially receive an incorrect diagnosis than a man.

Even when they are diagnosed correctly, women often do not get the best treatment.

The BHF report – called Bias And Biology – concludes there is a stark gender divide at the centre of cardiovascular care.

Dr Babu-Narayan said the findings highlight a ‘deeply entrenched issue which manifests itself in a series of unconscious biases’, adding: ‘The studies detailed in this briefing have revealed inequalities at every stage of a woman’s medical journey.

‘The assumption that women are not at risk of heart attack is false, and has proven to be deadly.’

‘Doctors just told me I had asthma’ 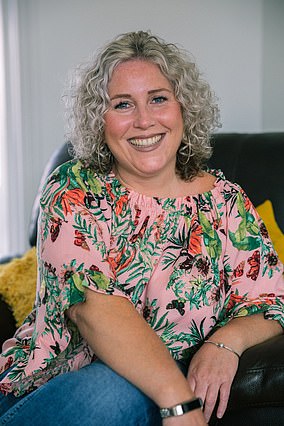 Simone Telford was told for years her shortness of breath was down to asthma. But then, aged just 42, her worried sister took her to A&E.

She said: ‘I was in hospital and they had just done an ECG scan [which checks the heart’s rhythm], and I said, almost jokingly, ‘I haven’t had a heart attack, have I?’ They just looked at me and said, ‘Yes, a very big heart attack.’ ‘

Miss Telford, an IT analyst from Cheshire, who was visiting her sister in Australia at the time three years ago, had to go straight into surgery for a heart bypass.

‘There were six critical blockages in total,’ she said. ‘I felt the doctors were looking at me as if to say we don’t know how you’re even still here.

‘The doctors were saying I had probably had angina for a couple of years, and it’s not been picked up because you’re female, because you’re young. It’s not even been looked at at all.’

The 46-year-old said: ‘I really want to stress that symptoms of a heart attack aren’t always what you think. Just get it checked out.’

Dr Ghada Mikhail, a consultant interventional cardiologist at Imperial College Healthcare NHS Trust in London, said: ‘Men are much more aware of the possibility of having heart disease.

‘If men develop symptoms of chest pain, they are much more likely to call an ambulance and seek medical help. There remains still the misperception that heart disease is a man’s disease.’

Professor Chris Gale, a consultant cardiologist at the University of Leeds, who has published several studies looking at women’s heart care, said: ‘On their own, the differences in care are very small, but when we look at this across the population of the UK, it adds up to a significant loss of life.

‘We need to understand more about why this is happening, and the way health systems make it more likely to happen.’