Two women lost their hair after eating pumpkin soup and a side-dish of squash, new research has revealed.

Just weeks after consuming the root vegetables, the unnamed women, believed to be from France, experienced spontaneous alopecia, which affected their scalps and genitals, a case report reveals.

Such symptoms are thought to be due to cucurbit poisoning, which occurs when people consume excessive amounts of the bitter-tasting compound cucurbitacin.

Shop-bought pumpkins and squashes contain trace amounts of cucurbitacin, however, it can be present in homegrown produce, particularly if the vegetables are grown with little water.

It is believed to be the first time cucurbit poisoning has been associated with hair loss.

Both of the women experienced short-term nausea, vomiting and diarrhoea after eating the vegetables before going on to develop trichorrhexis nodosa, which causes hair strands all over the body to snap off.

It is unclear if their hair has completely regrown.

Two women lost their hair after eating pumpkin soup and a side-dish of squash. Image shows one of the patient’s regrown hair at just 6cm long six months after the incident 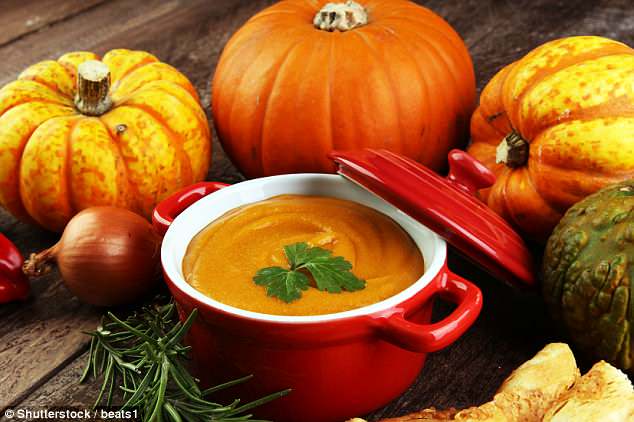 Weeks after the meal the women had alopecia, which affected their scalps and genitals (stock)

Trichorrhexis nodosa is a common condition that creates weak points along hair strands, causing them to break easily.

It can be inherited or may be triggered by excessive blow drying, brushing, perming or colouring.

Trichorrhexis nodosa may also occur as a result of an underlying disorder, such as an underactive thyroid, iron deficiency or build up of ammonia.

Symptoms include hair appearing like it is not growing.

It may break off at the scalp or cause split ends, thinness or strand tips to appear white.

Trichorrhexis nodosa is not a serious condition but can affect a sufferer’s self esteem.

The first patient ate the soup with her family, who consumed less of the meal than she did.

This is thought to be due to her being able to tolerate the meal’s likely bitter flavour.

Although her relatives experience gastro-related symptoms, she was the only one to suffer hair loss.

Two months later, some of the woman’s hair was still breaking 2cm from her scalp.

The second woman ate the squash side dish with others, who turned it down, complaining it tasted bitter.

After suffering initial extreme vomiting, the patient experienced substantial hair loss from her scalp and armpits.

Six months later, she was still unable to grow hair longer than 6cm.

It is unclear where the vegetables the women ate came from.

Dermatologist Dr Philippe Assouly, from Saint Louis Hospital in Paris, said: ‘Acquired trichorrhexis nodosa supports the diagnosis, with the length of the hair that grew after poisoning matching the length of the new hair growth.’

The findings were published in the Journal of the American Medical Association. 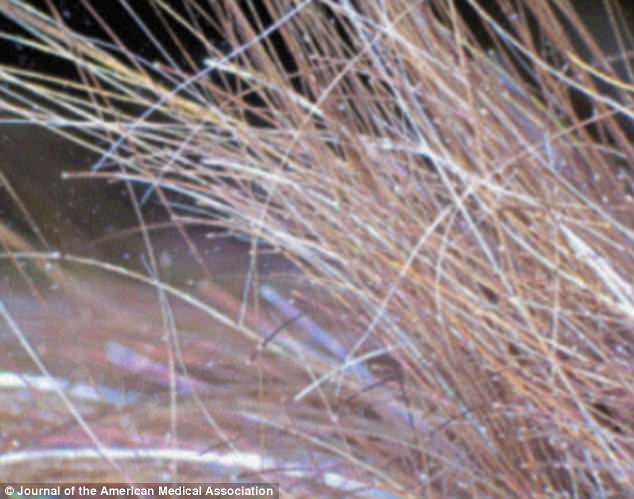 What is cucurbit poisoning?

Cucurbitacin is a toxin that occurs naturally in plants belonging to the Cucurbit family, which includes butternut squashes, pumpkins, courgettes, cucumbers and melons.

These toxins are thought to be a defence mechanism against herbivores.

In small amounts, cucurbitacins are harmless and merely create a slightly bitter taste.

When present in large quantities, however, they are extremely bitter and cause abdominal cramps, vomiting and diarrhoea.

Vegetables available at the supermarket have been bred to contain low amounts of cucurbitacin, however, environmental stress, such as inadequate water, can trigger its production.

The risk of cucurbit poisoning cannot be assessed by vegetables’ appearances.

To reduce the risk of becoming ill, people should never eat wild vegetables or swallow those that have a bitter taste.