A toddler died after plunging from a first floor bedroom when her mother pushed her cot up to an open window on one of the hottest days of last year, an inquest heard.

Little Margaret McDonagh was discovered on the concrete outside her home after falling through the open window.

Two-year-old Margaret was placed in an induced coma before being transferred to a specialist children’s hospital where she died 17 days after what a coroner ruled was a ‘tragic accident’.

Natalie Tregillies, left, pictured with her husband Ned McDonagh, right, and their daughter, Margaret, centre, warned other parents to take care when leaving windows open during hot weather after the youngster fell to her death having clambered from her cot on May 23 last

‘After the hearing her grieving father Ned McDonagh paid tribute to the little girl who was his “pride and joy” and warned other parents to take care when leaving windows open.

North Staffordshire Coroner’s Court heard Margaret’s mother, Natalie Tregillies, had been cleaning upstairs and pushed a bed close to the window to air it when tragedy struck on May 23.

In a statement, Natalie wrote: ‘Ned had gone into town with her and I was cleaning the house. It was the hottest day of the year.

‘I heard Ned come into the house. Windows had been opened in various parts of the house and I had put the bed close to the window to air it. The next thing I knew my daughter was found on the concrete injured.’

Police and paramedics were called to the family’s home in Tunstall, Stoke-on-Trent, after her father saw his child on the pavement. 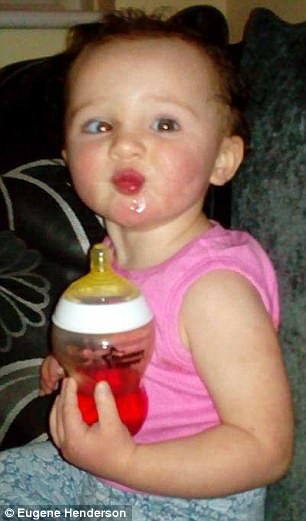 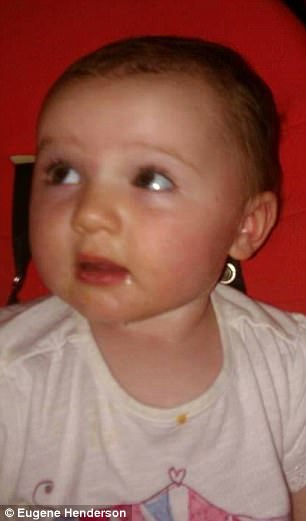 Medics placed Margaret McDonagh, pictured, into an induced coma for 17 days in an effort to improve her condition however, she passed away in Liverpool’s Alder Hey hospital on June 8

She was rushed to hospital where medics discovered Margaret had suffered a traumatic brain injury. She died at Liverpool’s Alder Hey hospital on June 8.

Staffordshire Police completed a report for the coroner and found the incident was a ‘tragic accident’.

Detective Constable Ciaran McNulty said: ‘The parents acted very quickly to get her to hospital. I later visited the scene of the incident and there was no evidence to show that anything was wrong – the windows were functioning as they should.

‘There was no indication of any misuse of drugs in the property and the scene fitted the parents’ accounts. There was evidence to show her mum had been cleaning upstairs.

‘This was nothing more than a tragic accident. There was no deliberate neglect and the child wasn’t left alone for a particular length of time.

He said: ‘Both parents were at home and mum was cleaning. A large window had been opened for ventilation.

‘Margaret’s father was downstairs and he heard a scream and she was taken to Haymarket Health Centre where she was taken by ambulance to the Royal Stoke University Hospital and placed in an induced coma.

‘Later that day she was transferred to Alder Hey Hospital where she was in a critical condition before she died on June 8. I can only describe this as a tragic accident.’

Following yesterday’s inquest, Ned said: ‘Margaret was my first little girl and I waited so long to have a girl. She was everything to me and everything is gone now.

‘There is no life left after her, and whatever is left, we are just gliding through now. She made us so happy.

‘I just think people don’t realise what can happen. She was really loved by her family. We are living in misery because of this and we will never get over it.

‘We want parents to be very aware of things like this because we don’t want another child or another family to go through this. I wouldn’t wish it on anyone.’