A two-year-old boy is believed to be one of the youngest people in Britain ever to be diagnosed with a rare brain condition dubbed ‘childhood Alzheimer’s’.

Little Reggie Griffiths is battling a brain wasting disease which affects just one in 70,000 people and his parents have been told he may not live past the age of 20.

The tot is thought to be the youngest person in the country to suffer from Sanfilippo syndrome, which destroys the brain in a similar way to Alzheimer’s disease.

His parents took him to hospital in Stoke-on-Trent thinking he might have autism after they noticed his development was slow and he often rocked back and forth.

But the reality is much worse and the rare terminal condition means Reggie will lose his memory as his mind and body deteriorate.

Heartbroken mother Rebecca Griffiths, 25, was told nobody with the condition lives past their teenage years but she is determined to give her son the best life she can.

The family will hold a fundraiser in their hometown for a charity researching the rare condition and are sharing their story to raise awareness of the devastating disease.

Two-year-old Reggie Griffiths, from Knutton in Staffordshire was diagnosed with a genetic brain condition similar to Alzheimer’s disease

Full-time mum Ms Griffiths from Knutton, Staffordshire said: ‘Reggie was diagnosed on January 30 this year but he hadn’t been right for some time.

‘We took him to Royal Stoke Hospital because he was just rocking back and forth and developing slowly – at first they thought it was autism.

‘He was transferred to Birmingham’s Children’s Hospital after a paediatrician at Stoke noticed the symptoms and we were then told he had Sanfilippo syndrome.’

Sanfilippo syndrome is a rare genetic condition which causes fatal brain damage, and is thought to affect one in 70,000 children.

The condition causes brain cells to fill up with cell waste which the body cannot get rid of – over time this causes the brain cells to die and the organ to stop working. 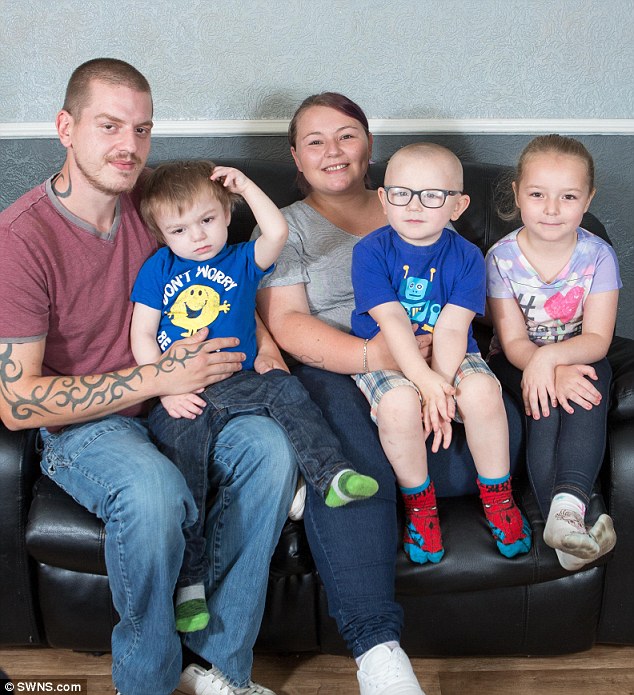 Reggie is unlikely to live past his teenage years, but his parents are determined to make his life enjoyable while it lasts – Reggie’s family, pictured from left: father Jake Huckfield, mother Rebecca Griffiths, and siblings Mason, four, and Amelia, six 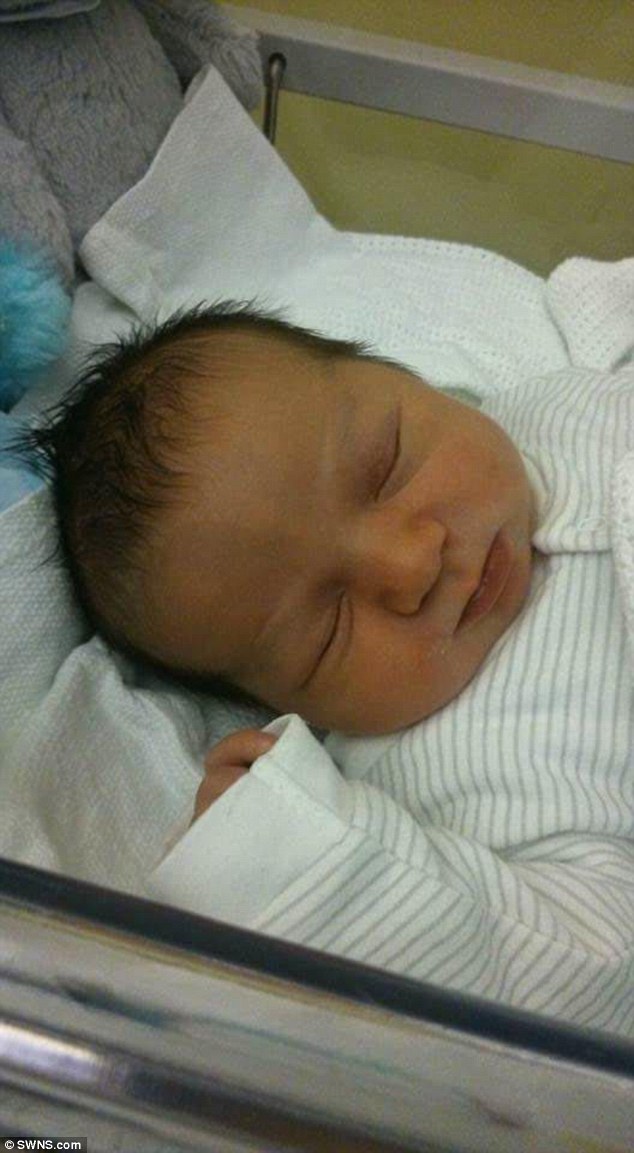 Reggie, now two, was born with the incurable Sanfilippo syndrome which causes brain cells to die off and cause irreparable brain damage which will eventually be fatal

‘Children who have the conditon will often have a broad nose and a big forehead and so [the doctor] thought that’s what he may have,’ Ms Griffiths said.

‘I Googled it and your heart just breaks when you see the words “incurable” and “terminal”.

‘I didn’t cope well at first but I’ve got two other children to be a mum for and I want to give Reggie the best life possible.

‘He is hyperactive, non-verbal, has sleep apnoea and his behaviour can be hard to deal with but a lot of the time he can be a happy smiley little boy.

‘People ask me all the time how I cope and I just get on with things. I always said I wasn’t going to bury my head in the sand and hide.’ 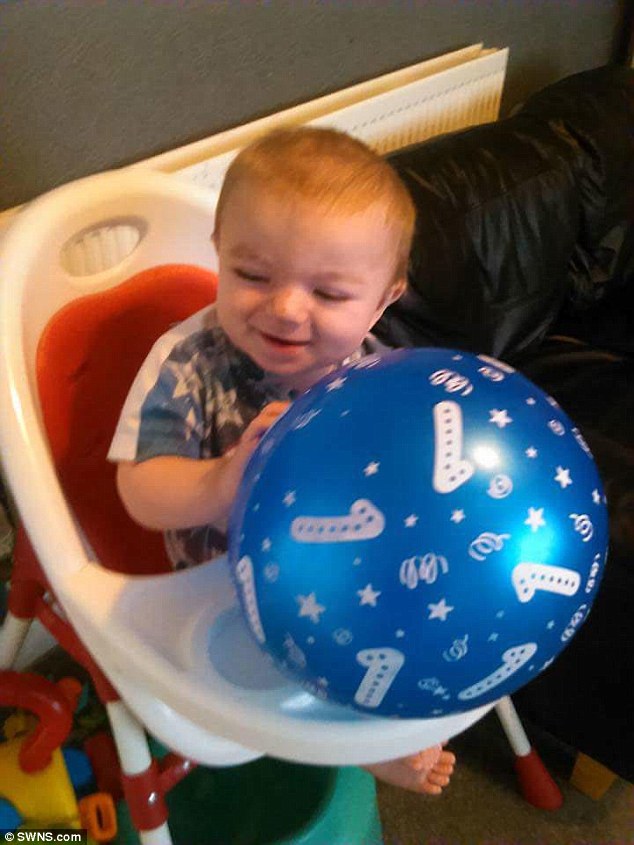 Reggie, pictured on his first birthday, has only ever said the word ‘dad’, his mother said, and she does not expect him to ever learn to talk properly 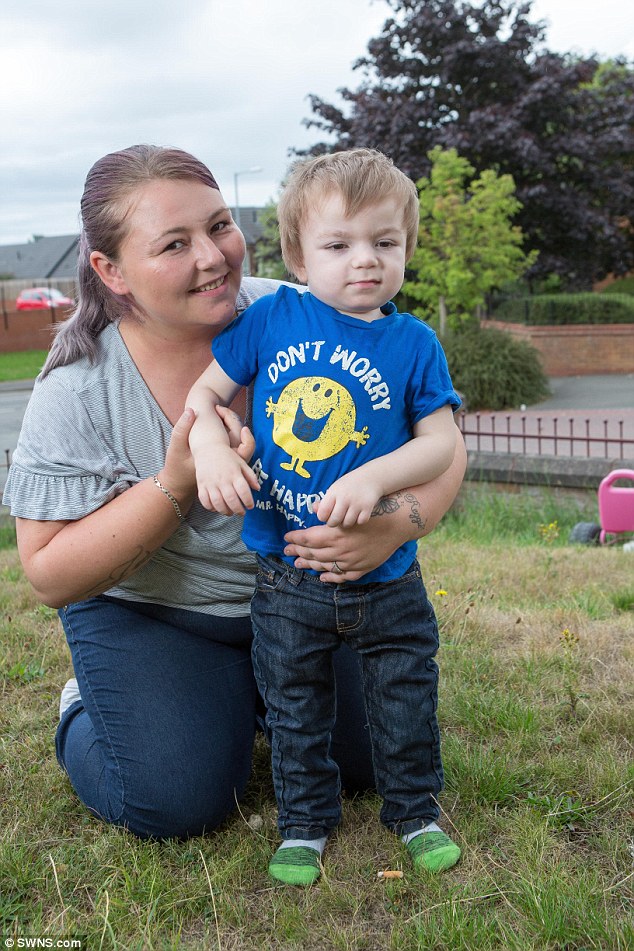 Rebecca Griffiths, pictured with her son Reggie, said: ‘I Googled it and your heart just breaks when you see the words “incurable” and “terminal”

Sanfilippo syndrome is not curable and usually kills children before they make it out of their teenage years.

Because Reggie’s brain is so damaged he does not speak, although his mother says he did say the word ‘dad’ once.

Children with the condition don’t usually live past 20

WHAT IS SANFILIPPO SYNDROME?

It occurs when the enzymes that are needed to break down heparan sulfate sugar chains are missing or defective.

Over time, brain cells fill up with waste that the body is unable to process.

As the brain gets progressively damaged, sufferers will experience:

Sufferers are initially healthy but start to show signs of a decline in learning ability between the ages of two and six.

Children can only inherit the condition if both of their parents are carriers – in that situation, the child has a 25 percent chance of having the disease.

The syndrome affects one in 70,000 children.

Sanfilippo Syndrome is referred to as a childhood disease because most patients never reach adulthood.

There is currently no treatment or cure, but there are several clinical trials already completed or underway.

His parents have accepted that rather than growing up to be big and strong, Reggie will grow weaker as he gets older and his brain will degenerate.

Ms Griffiths said: ‘It’s called a childhood illness as this condition means they don’t live past 20, so we’re going to create as many happy memories as we can for him.

‘Reggie’s brain is very damaged and so it may be shorter than that. His tonsils are big and his airway is very small so they will have to come out at some point.

‘He will just slowly deteriorate to the point where he will be wheelchair and bed-ridden and won’t be able to eat. You just deal with each problem step by step.

‘I want to make the most of him while he’s with me and give him amazing memories while he can recall them. There’s no point me falling apart.

‘His body will eventually shut down and then he will forget everything he has learned.

‘I don’t think he will ever learn to talk but he did say the word ‘dad’ once, so we can always hold on to that.

‘He is a very happy child though and is just lovely but I don’t think I’ll ever hear the sound of his voice.’

Ms Griffiths and Reggie’s dad Jake Huckfield, 27, are now planning a fundraiser in their hometown to help fund research into the condition.

They hope one day a cure can be found, and are promoting The Society for Mucopolysaccharide Diseases (MPS Society).

Ms Griffiths, who is also mum to Amelia, six, and Mason, four, added: ‘I don’t think we’ll see a cure in Reggie’s lifetime.

‘But I hope in the future someone will be able to say my child used to have that. 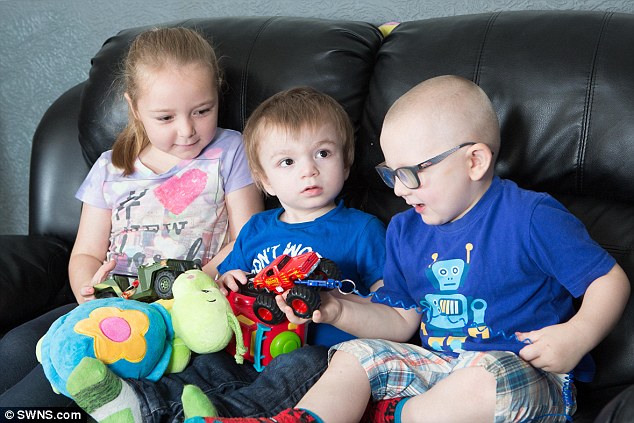 Two-year-old Reggie, pictured with sister Amelia (left) and brother Mason (right), will eventually become so brain damaged by Sanfilippo syndrome that he will rely on a wheelchair 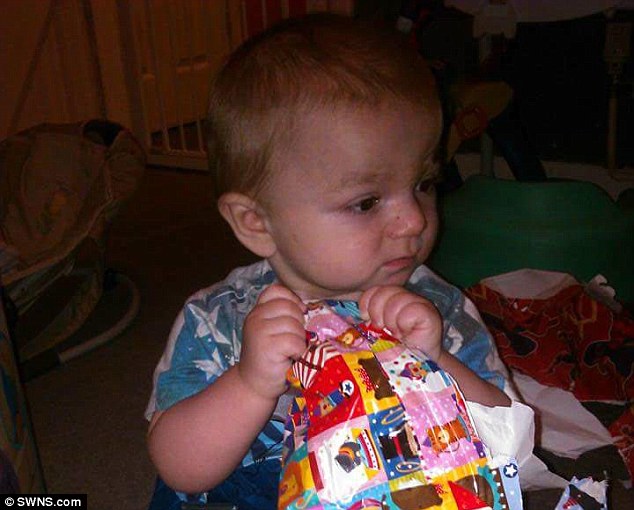 Reggie’s parents say he is a happy child but he cannot talk, and will gradually forget everything he has learned so far because of the disease dubbed ‘childhood Alzheimer’s’ 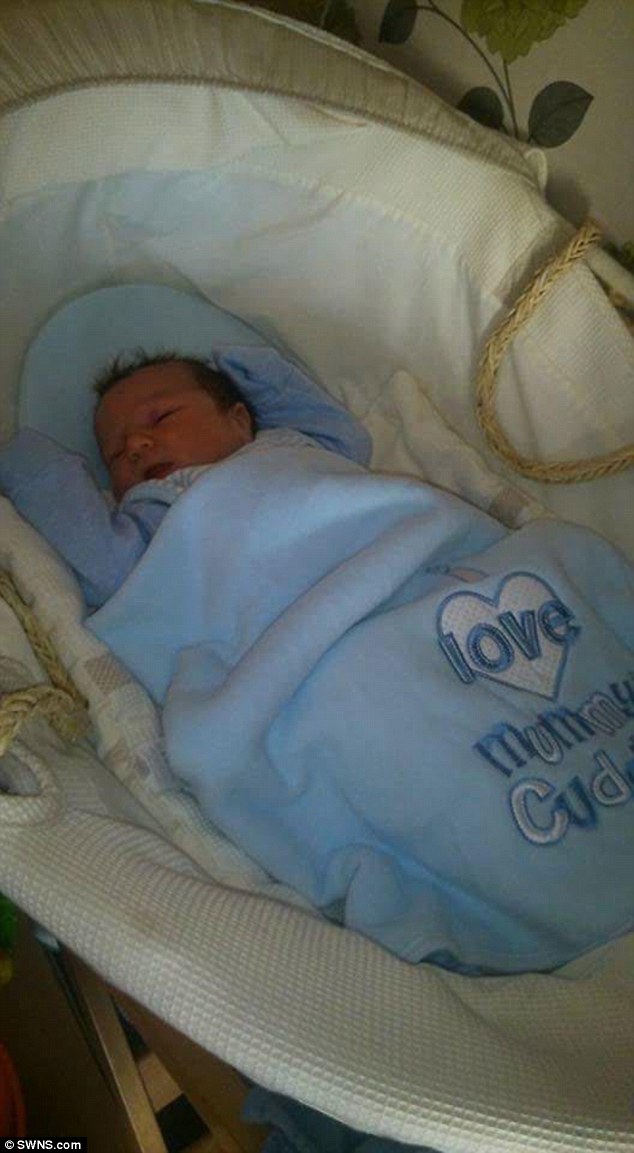 Sanfilippo syndrome, with which Reggie was born, is a rare genetic condition and is thought to only affect around one in every 70,000 children

‘The MPS Society supports families who are affected and it’s such a cruel illness but also they are seeking a cure.

‘It would be of some comfort in the future if we can say we’d contributed towards a cure in any way we can.

‘A lot of people try and raise money for treatment abroad and we were told there were clinical trials – but I don’t want to put him through that.

‘We’re just focused on giving him the best life possible’

‘None of the clinical trials have worked so far and you don’t know he is going to react to them.

‘I don’t want him being used as a guinea pig, so we’re just focused on giving him the best life possible while we have him with us and accept what’s to come.’