Family break down as hundreds of mourners gather for first funeral of victim of horror ute smash, 16 – as his casket arrives at church covered in red andw white flowers

Hundreds of mourners gathered at HisHouse Church in Picton, south-west of Sydney, on Thursday morning to say farewell to 16-year-old Tyrese Bechard.

The Picton High School student died alongside four of his mates on September 6 when a Nissan Navara ute slammed into two trees on East Parade in nearby Buxton.

Ahead of Thursday’s funeral, multiple houses in the small town of Picton put balloons up to pay tribute to the five teenagers.

At the funeral, the church overflowed with friends and family who hugged and shed tears as a photo of Tyrese was shown on a projector – in front of bouquets of white flowers.

Teenagers arrived in school uniforms to pay their respects and the mood was somber in the church.

Before the service, ‘Fix you’ by Coldplay could be heard above the quiet sobs of loved ones, before the crowd stood as the coffin was brought in, with ‘Forever Young’ playing. 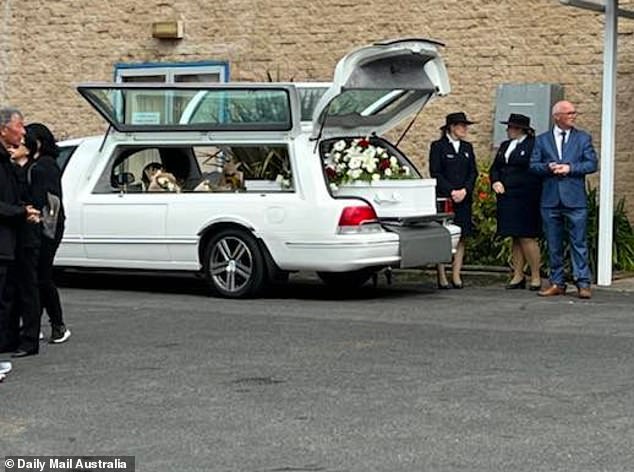 At the funeral, the church overflowed with friends and family who hugged and shed tears as a photo of Tyrese was shown on a projector

Daily Mail Australia previously revealed Tyrese had been at boxing with Antonio in the hours before the crash and were supposed to catch the train home together.

When it got late, Antonio’s dad Exaven Desisto called his son to ask where he was.

‘I called him, because I always called him when he was late home, and I said “Tony, where are you?”,’ Mr Desisto recalled.

‘And he said, “I’m at McDonald’s getting some food, I’m with Tyrell”.’

Hours later, the teenagers were dead.

In an interview with officers, Edwards allegedly told police his steering wheel began ‘shaking’ and that he lost control of the vehicle.

He said he couldn’t control the vehicle and tried to brake but it didn’t significantly slow. Police allege roadway evidence from the scene does not support his account.

The driver also allegedly claimed he only knew about four passengers and didn’t know when the fifth one entered the car.

Following the court mention on Thursday, Edwards was taken to Silverwater’s Metropolitan Remand and Reception Centre.

Witnesses alleged the car travelled at ‘high speeds’ and was on the wrong side of the road, before coming back to the right side, before the crash.

According to court documents, four of the teens were thrown from the back of the vehicle.

They were found a ‘short distance away, trapped by confinement’.

Edwards was allegedly unable to free himself from the wreck, while another victim was trapped in a passenger seat.