There is something wonderfully Manchester about Parklife Festival, bringing together four pillars of its unique culture.

Vibrant live music, a diverse community, the grizzly weather – even in August – and reliance on a dysfunctional tram network.

Two young lads went in 2019 and had the time of their lives. Jeremy Wisten spent the majority of the day on Tyrhys Dolan’s shoulders to see the stage from miles back among Heaton Park’s swaying crowd.

Neither of them were particularly tall. Pretty small, in fact. Dolan’s legs felt like they had endured a marathon the next morning after carrying his best mate for so long.

‘The view is mint,’ Wisten shouted down as they enjoyed Migos, an American rap group. They devoured the music, both on a high as thousands spilled out to catch Metrolinks too small and too infrequent to cater for the festival’s needs.

‘It was chucking it down all day, muddy as anything,’ Dolan says. ‘I’ll always remember walking out. Jeremy turns and says, ‘Ty, watch this’ – he’s dancing away – and he slips and drops into this mud bath.

‘He’s dripping in the stuff, head to toe. He’s sat there on the tram, properly caked. Everyone is looking. “Who’s this kid?” It was absolutely packed. You couldn’t move. Everybody was staring at him. I was falling about laughing.’ 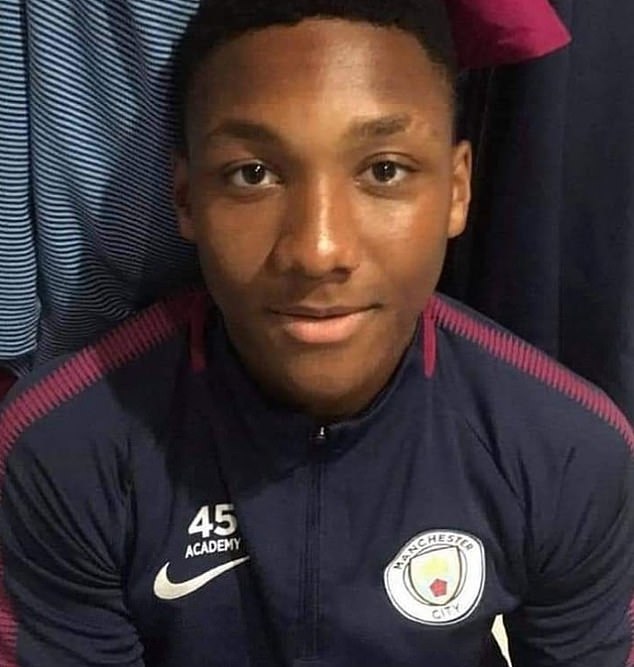 Dolan and Wisten met in Manchester City’s academy, the latter a year older. They bonded at the club’s chosen private school, St Bede’s, and became inseparable.

Dolan was let go in 2017, moving on to Preston North End – still spending every weekend at home with his pal – while Wisten remained in City’s system until months prior to that Parklife trip.

It is the call every family dreads: their son is no longer required. Injury contributed to his release, the fallout of which ultimately caused unimaginable grief.

Wisten was found hanged in his bedroom at the family home in Wythenshawe on October 24, 2020. Unresponsive, medics could not revive him.

Dolan woke up that morning to an Instagram message from Wisten’s sister, asking him to urgently ring the family. ‘I called his mum and she told me,’ Dolan says. ‘I just dropped to the floor. You break down. It was like an out of body experience. 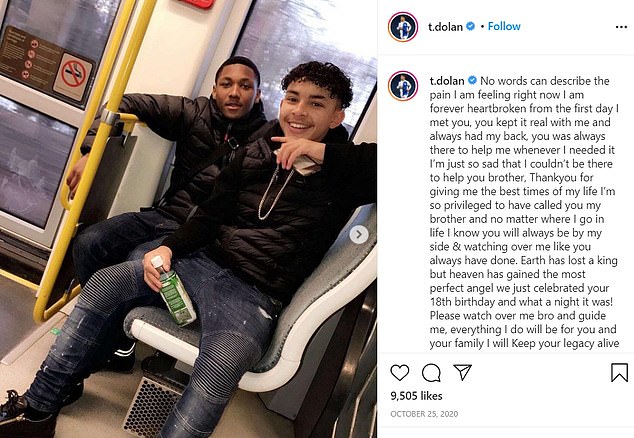 Dolan posted an emotional tribute to Wisten, his lost pal, after discovering he had passed away

‘I can still picture myself in the scene when we spoke. I lost my best friend. She thanked me for being his friend.’

There is pain in his voice. No teenager should have to act as pallbearer at his best friend’s funeral. Dolan never saw it coming because – and this is the thing when heartache entwines with football – young men have always masked their emotions.

Wisten did not find another club after his spell at City came to an end. There were palliative check calls in the months after parting ways but football moves on.

Only once was there an inkling that Wisten struggled to cope. He confided in Dolan that bumping into a former City employee, who had gone into individual coaching, reduced him to tears in a gym toilet.

The coach innocently invited him to train one-on-one in order to reach professional sharpness again. Wisten had kept himself supremely fit but, at that point, knew there was no way back into the game. He had been away too long. The dream had disappeared. 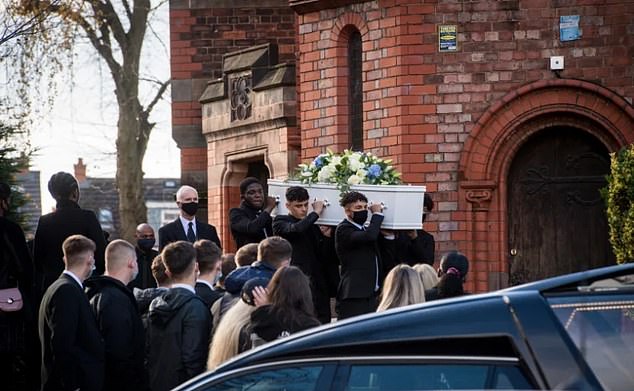 A pallbearer at Wisten’s funeral, Dolan helped carry the body of his ‘brother’ inside the church

‘I kept asking how he was after that but he was always the happiest in our group,’ Dolan says. ‘Honestly, it’s crazy. There was no change in him. He made every day a laugh. You had to be there to see him.’

If only Wisten could see Dolan now. Hopefully he has a vantage point somewhere, atop his shoulders again.

Here stands a remarkable 19-year-old. Dolan is thriving at Blackburn Rovers in the Championship, Preston presumably ruing the decision to release him.

Last week brought a 50th senior appearance for a versatile attacker who is scoring goals, with the responsibility of wearing ex-Tottenham winger Lewis Holtby’s old No 10 shirt at Ewood Park, and winning countless friends in east Lancashire.

Those in the game describe it as unfathomable that somebody with so much senior experience has yet to earn England age-group recognition, with Friday’s Under 20 squad announcement again omitting his name. Surely that will come as he continues to prosper. 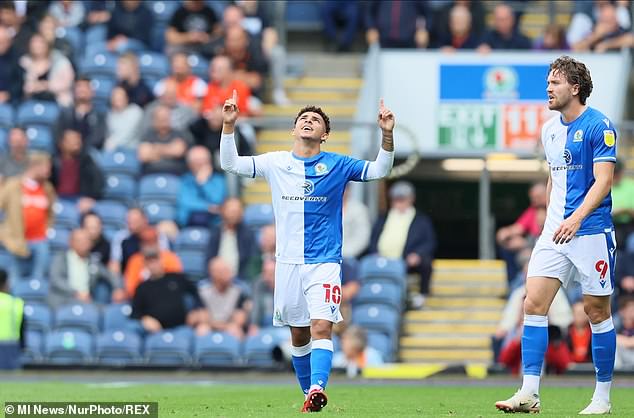 ‘I really want to push for that Premier League spot with Blackburn. And push for the England squad more than anything. I’d be so proud. I deserve to be in and around it. When I came on the scene last season, there was talk about it. I thought I had it but then wasn’t picked. I was gutted. I wondered why I was being overlooked.’

The story goes that Dolan was signed by Blackburn with a view to turning out for their Under 23 team a year ago but, after a pre-season session with Tony Mowbray’s squad, the manager immediately wanted to know who he was. Dolan never did link up with the reserves.

He has not looked back professionally. Personally, the landscape is different. The past defines his character. He felt compelled to offer his voice to the Go Again charity, aimed at dealing with mental health issues affecting young players.

Dolan hops on Zoom, FaceTime, WhatsApp – any platform – to offer guidance and share his own experiences of rejection.

It is important and laudable work in a sport that is slowly beginning to talk. A reminder: he is 19. 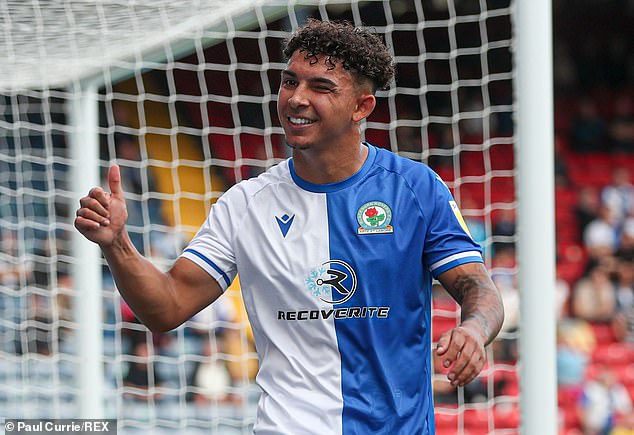 Despite being just 19 himself, Dolan selflessly offers guidance and shares his own experiences

‘Go Again offer a mental health support package,’ he says. ‘It was a no-brainer to get involved. When I got released I didn’t have a player to get on the phone with. I didn’t have someone who could share a success story. I’ve had a lot of messages and players have gone on to other clubs.

‘Kids are sharing how they struggle to find a club. I give them my story. It’s amazing to help in a small way. I don’t want what Jeremy must have been going through to happen to anyone else. If we can help one kid then we will feel we’ve done our job.

‘What Jeremy wanted more than anything was to be a footballer. He’s my reason to work harder than anybody else. I dedicate everything to him and his family. When I score, I point to the sky. That’s my way.’ 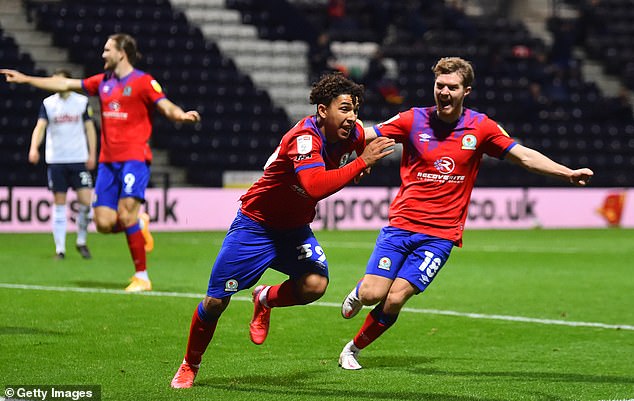 He thinks back to the wake, the long night spent reminiscing. There are plans for a reunion to mark the first anniversary of Wisten’s passing.

‘We want to celebrate him. We are grateful for how many memories he gave us. I’m proud and lucky to have shared so many with Jeremy. I don’t think I’ve ever been so close to anybody. I class him as a brother. I hope he would be proud of me.

‘I want to keep his name and his legacy going. A life forever.’