‘Ohhh Derek Chisoooora!’: Tyson Fury leads cringy sing-a-long for his rival after stoppage victory and reveals Del Boy was calling him a ‘little b****’ during their one-sided contest

The 34-year-old, back in the ring after reversing his decision to retire in April, won after the referee stopped the fight in the 10th round.

Chisora, 38, had battled hard but was outclassed in a third defeat to the Gypsy King.

said: ‘I felt good. I needed some rounds. I hadn’t boxed since April. I’ve had a retirement, I’ve had a lot going on, I felt good in there tonight.

‘Take nothing away from DC, he’s an absolute warrior. It’s been an absolute privilege to fight him three times. 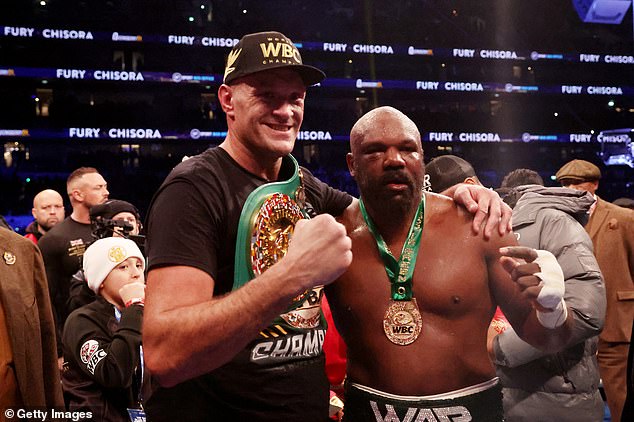 Chisora, 38, had battled hard but was outclassed in a third defeat to the ‘Gypsy King’

‘We’ve had three epic fighters and what a tough man. I was hitting him with shots that’d knock anyone else spark out.

‘And he was calling me a little bitch in there!’

In front of a 60,000 crowd, Fury dominated from the opening bell but Chisora battled on bravely, repeatedly on the ropes but soaking up the blows from his taller and heavier opponent. 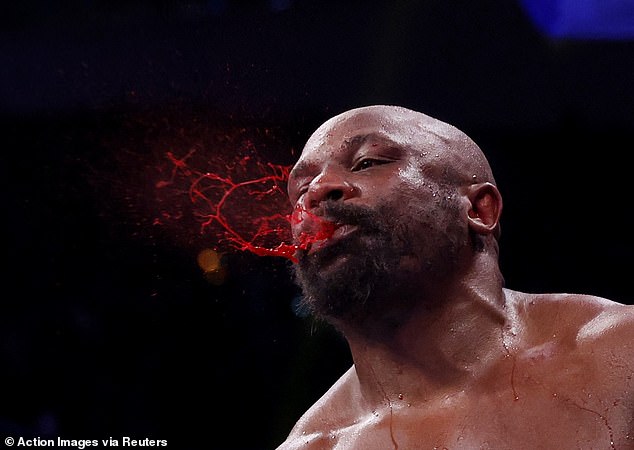 Chisora received treatment in his corner at the end of the seventh round as his right eye closed up, and the stoppage became merely a matter of time.

Referee Victor Loughlin finally stepped in, waving a halt with 10 seconds remaining in the 10th of the 12 scheduled rounds.

Fury, 34, took his unbeaten professional record to 33 wins and a draw as his outclassed 38-year-old opponent suffered a fourth defeat in his last five fights and 13th in 46 career bouts.

The ‘Gypsy King’ also beat Chisora comfortably in their previous encounters in London in 2014 and 2011 and Saturday was really a filler before a much bigger potential fight next year.