REVEALED: Tyson Fury was LOSING to Deontay Wilder on all three scorecards halfway through their trilogy fight… before the Gypsy King took control – and the lead on points – and won with technical knockout in the 11th round

Tyson Fury beat Deontay Wilder to retain his WBC heavyweight world title late on Saturday night in Las Vegas – but it was far from straightforward.

Fury was twice rocked by Wilder in the fourth round, falling to the canvas twice before rallying to turn the tables on his rival later in the fight.

And the scorecards from ringside show world champion Fury, 33, was in trouble at the 12-round fight’s halfway point.

Judges Dave Moretti, Tim Cheatham and Steve Weisfeld all had Wilder ahead on their cards – most notably due to the American taking the fourth round 10-7. 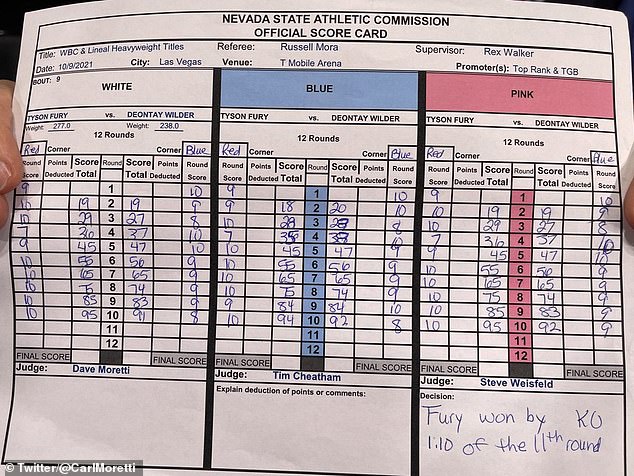 And, with opinions differing, Wilder was also credited with wins in the first, second and fifth rounds by members of the judging trio.

But Fury rallied and was clearly in the ascendancy as the fight developed, despite some late Wilder flurries. Cheatham gave the Bronze Bomber the ninth round – but otherwise Wilder was not credited with a single round from the sixth onwards.

Fury won the pair’s previous meeting with a seventh round technical knockout, while the first clash between them ended in a controversial split decision draw that Wilder maintains he won.

On that occasion, Mexican judge Alejandro Rochin scored the fight 115–111 for Wilder, Canadian judge Robert Tapper had it 114–112 for Fury and British judge Phil Edwards scored it a 113–113 draw.

On Saturday night, though, there was little doubt that Fur was the deserved victor. He climbed from his falls to the canvas to turn the tables on Wilder and win.

‘I wasn’t hurt,’ Fury told BT Sport. ‘You get hit, you wake up on the floor. I got up and was very conscious the whole time. I was one punch away from knocking him out in the whole fight.’ 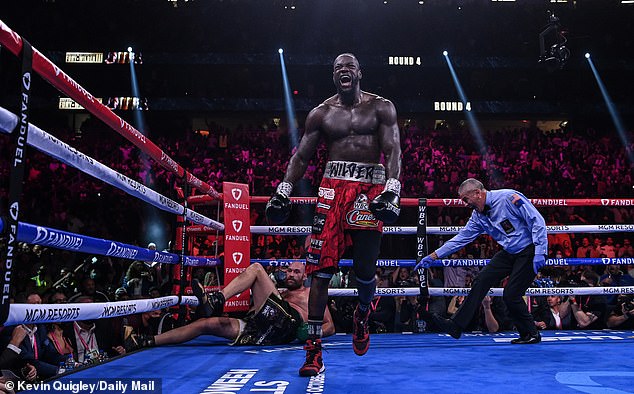 He added: ‘I didn’t have my best performance but I pulled it out of the bag when it needed to be done.’

Wilder refused Fury’s attempt to embrace in a sportsman’s gesture after the fight, leaving the Gypsy King to call him a ‘sore loser’ and an ‘idiot’.

Wilder was taken to the hospital for checks after the fight, having been repeatedly checked by ringside doctors before Fury dealt the knockout blow. 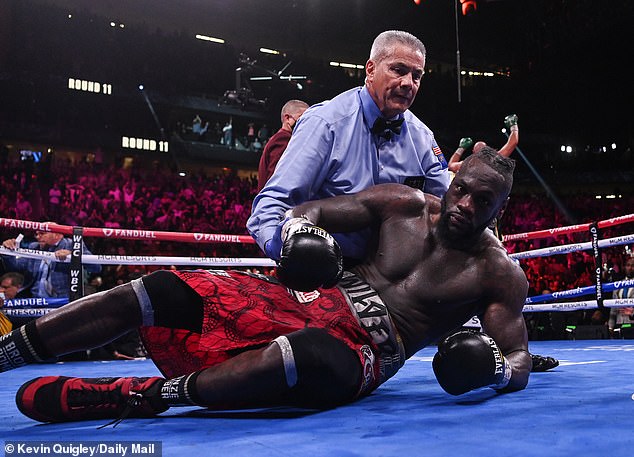 Only one judge gave Wilder any of the rounds between the sixth and 11th, when he was beaten