The United States on Saturday surpassed 370,000 coronavirus deaths a day after the nation broke a record for the highest new cases of COVID-19 in one day as California and New Jersey experienced a massive one-day surge.

A total of 370,119 people have died since the start of the pandemic, according to Johns Hopkins Medical Center. Additionally, there were 310,080 new cases reported on Friday 50,000 of which were in California and 20,000 in New Jersey, according to the COVID Tracking Project.

It comes as there were 23,083 COVID-19 deaths already recorded in the first eight days of the year and 16 states reported their highest number of COVID-19 hospitalizations this week, in yet more troubling signs for the post-holiday surge.

There were again records set on Friday for the seven-day average for cases, hospitalizations, and deaths, with fatalities climbing to an average of 2,934.

This week, 16 states reported their highest number of COVID-19 hospitalizations. Pictured, patients are pushed inside the Emergency Room at the LAC USC Hospital ER 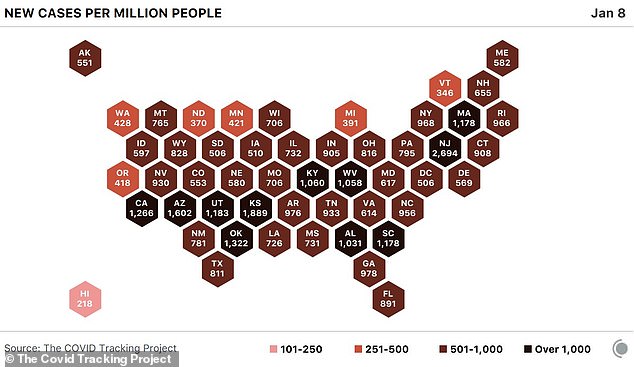 Friday’s rise in cases now means that 44 states have reported at least 500 COVID-19 cases per million people, according to the COVID Tracking Project, pictured above 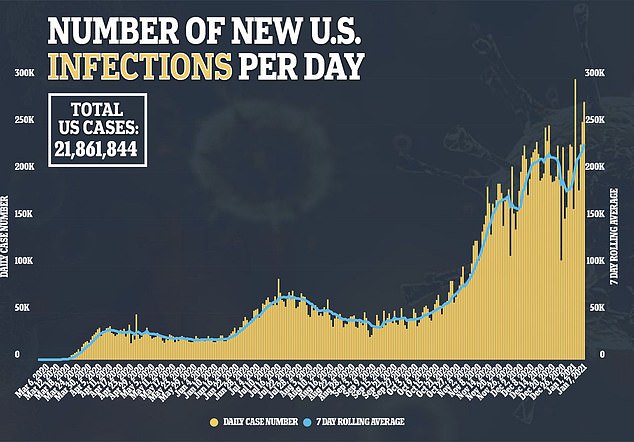 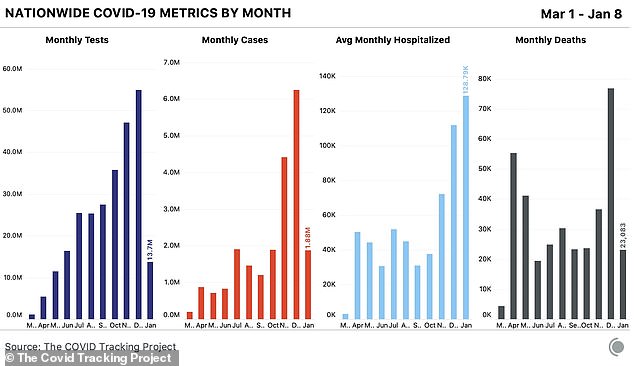 There were 23,083 COVID-19 deaths already recorded in the first eight days of the year, as pictured in the monthly chart from the COVID Tracking Project far right

The worst-hit state since the state of the pandemic is New Jersey, which had another spike on Friday, and has recorded 2,694 infections per million of population.

Arizona has also surpassed its summer surge in hospitalizations with patients increasing at an alarming rate.

On Wednesday, health experts named Arizona as the new global coronavirus hot spot as the state’s outbreak took another turn for the worse in Arizona.

The state is now leading the nation with the highest COVID-19 diagnosis rate.

Since December 31, one in every 111 Arizonans has been diagnosed with the virus.

The surge of new cases on Friday came as Dr Deborah Birx warned that the U.S. could have its own home-grown mutant strain of COVID-19, in the same way that Britain does, because the virus is spreading so fast. 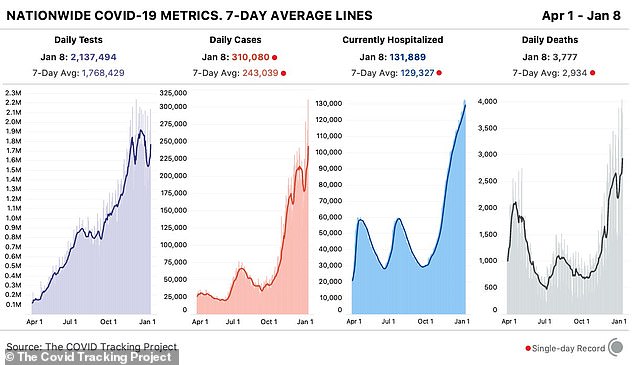 The United States on Friday broke a record for the highest new cases of COVID-19 in one day as California and New Jersey experienced a massive one-day surge, pictured second from left 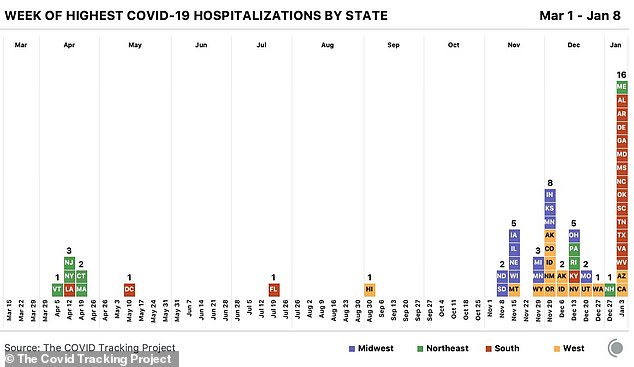 Sixteen states have record their highest number of hospitalizations this week 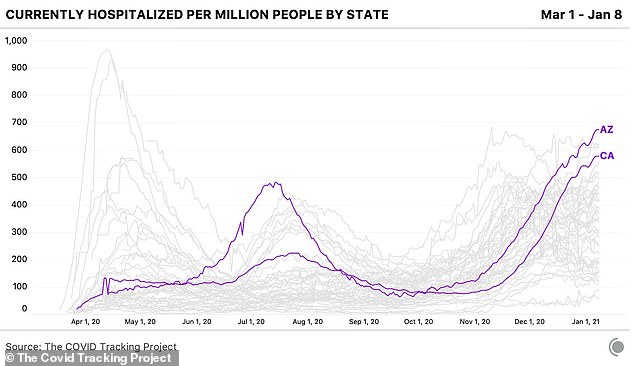 Hospitalizations are rising at troubling rates in Arizona and California, particular

Birx, who announced before Christmas that she would retire when Joe Biden takes office, after being left red-faced for ignoring COVID guidelines during the holidays, made the analysis during a recent meeting of the White House coronavirus taskforce.

She presented a series of graphs and charts, officials have said, which showed a serious spike in cases.

Birx speculated that this could be because a new, more infectious variant of the virus is circulating – in the same way that Britain has been shaken by the new B.1.1.7 strain.

Her concerns made it on to the weekly report sent to state governors, which was leaked on Friday. 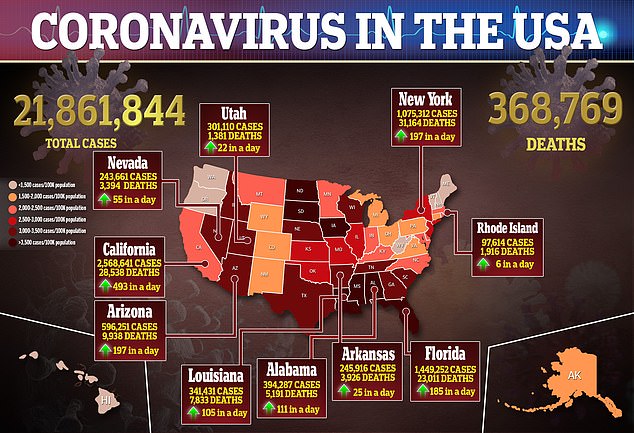 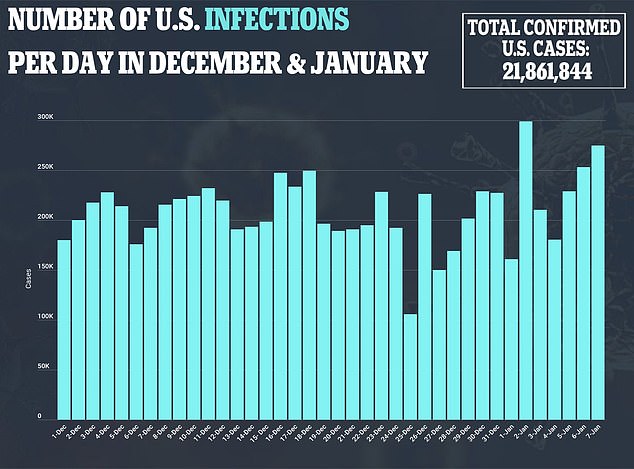 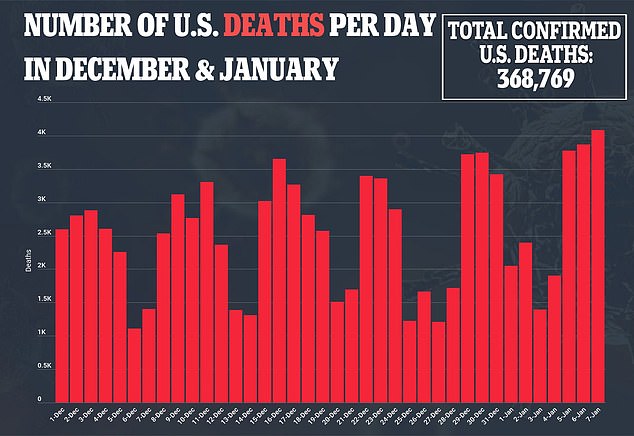 ‘This fall/winter surge has been at nearly twice the rate of rise of cases as the spring and summer surges,’ the report stated.

‘This acceleration suggests there may be a USA variant that has evolved here, in addition to the UK variant that is already spreading in our communities and may be 50% more transmissible.

‘Aggressive mitigation must be used to match a more aggressive virus.’

Nationwide, there have been more than 21.8million Americans infected with coronavirus since the start of the pandemic and 368,679 deaths.

Coronaviruses mutate regularly, acquiring about one new mutation in their genome every two weeks.

This super strain, named B.1.1.7, was first identified in the UK in November.

It is not, however, believed to be any more lethal.

Public Health England researchers compared 1,769 people infected with the new variant, with 1,769 who had one of the earlier strains of the virus.

Forty-two people in the group were admitted to hospital, of whom 16 had the new variant and 26 the wild type.

Twelve of the variant cases and 10 of the ‘older’ virus cases died within four weeks of testing.

Neither the hospitalization nor the mortality differences were statistically significant.