U.S. Navy issues warning to Iranians not to come within 100 meters of its warships or be fired upon

The U.S. Navy issued a stark warning to Iranian vessels on Tuesday not to come within 100 meters of its warships or risk being fired upon.

It announced that vessels in the Mideast that came closer than this to an American ship would be ‘interpreted as a threat and subject to lawful defensive measures’.

The Navy issued the notice for the Arabian Sea, Gulf of Oman and Persian Gulf.

It comes just a month after President Donald Trump instructed the Navy to fire on any Iranian ships that harass American vessels following a close encounter in the Persian Gulf.

The U.S. Navy issued a warning Tuesday that ships where to come no closer than 100 meters to its vessels while in international waters. It comes a month after an encounter with Iranian vessels in the Persian Gulf, pictured, which the U.S. described as ‘dangerous and harrassing’ 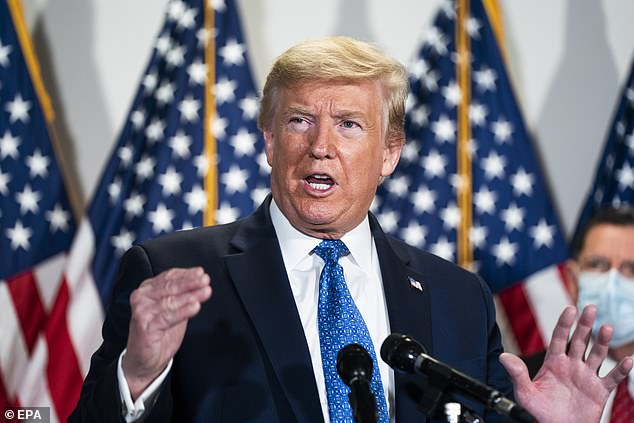 The warning from the U.S. Navy comes after President Trump in April fired off a tweet aimed at Tehran telling them their boats would be ‘shot down’ if they harass U.S. Navy vessels

Defensive measures have typically included turning a ship away from the approaching vessel, sounding its horn, shooting off flares and ultimately firing warning shots to force the vessel away.

But offering a specific distance is new for the Navy.

‘However, our commanding officers retain the right to self-defense if deemed necessary.’

While 100 meters may seem far, it’s incredibly close for large warships that have difficulty in turning quickly, like aircraft carriers.

The Navy issued a new notice on Tuesday that all vessels must remain 100 meters from any of its ships in international waters. If not, they risk being faced with defensive measures that include shooting off flares and ultimately firing warning shots to force the vessel away

The notice targeted the Arabian Sea, Gulf of Oman and Persian Sea, which appeared a direct warning to Iranian vessels following a close encounter with American warships in April

It comes after the U.S. accused Iran of conducting ‘dangerous and harassing’ maneuvers near American warships in the northern Persian Gulf in April.

Iran also had been suspected of briefly seizing a Hong Kong-flagged oil tanker just before that.

In April, Trump warned on Twitter: ‘I have instructed the United States Navy to shoot down and destroy any and all Iranian gunboats if they harass our ships at sea.’

Trump did not cite a specific event in his tweet or provide details but it is thought to have been linked to an incident involving the U.S. Navy’s Bahrain-based 5th Fleet.

A group of 11 ships with Iran’s Islamic Revolutionary Guard Corps repeatedly crossed the bows and sterns of the fleet at close range and high speeds in April – with one passing within just 10 meters of a Coast Guard cutter.

The ‘dangerous and provocative actions increased the risk of miscalculation and collision,’ a statement from U.S. Central Command said, adding that U.S commanders on the scene ‘retain the inherent right to self-defense.’

The American vessels included the USS Paul Hamilton, a Navy destroyer; the USS Lewis B. Puller, a ship that serves as an afloat landing base; and the USCGC Maui. Coastguard vessels are part of U.S. forces in the Gulf.

The ships were operating with U.S. Army Apache attack helicopters in international waters, the statement said.

Eventually, after around an hour, the Iranian ships acknowledged the warnings over the bride-to-bridge radio and then maneuvered away.

Iranian officials did not immediately acknowledge the incident. 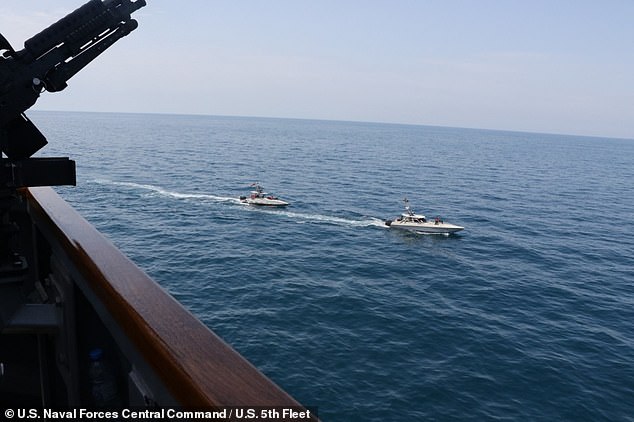 A group of 11 ships with Iran’s Islamic Revolutionary Guard Corps repeatedly crossed the bows and sterns of the U.S. Navy’s Bahrain-based 5th Fleet at close range and high speeds in an incident in April – with one passing within just 10 meters of a Coast Guard cutter

The American vessels included the USS Paul Hamilton, a Navy destroyer; the USS Lewis B. Puller (above), a ship that serves as an afloat landing base; and the USCGC Maui. The ships were operating with U.S. Army Apache attack helicopters in international waters, the statement said. Trump issued a threat for the Navy to shoot on Iranian ships shortly afterwards

After Trump’s tweet, however, General Abolfazl Shekarchi, a spokesman for Iran’s armed forces, accused Trump of ‘bullying’ and said the American president should focus on taking care of U.S service members infected with the coronavirus.

His tweet came amid a re-escalation of tension, with Iran’s Revolutionary Guards saying hours earlier that that they had launched the country’s first military satellite, which the U.S. regards as a cover for missile development.

The U.S. Navy has years of experience with Iranian forces getting that close, namely the hard-line, paramilitary Revolutionary Guard.

Their armed speedboats routinely cut across their paths when going through the Strait of Hormuz, the narrow mouth of the Persian Gulf through which 20 percent of all oil passes.

Tensions have been high between Iran and the U.S. ever since President Donald Trump unilaterally withdrew America from Tehran’s nuclear deal with world powers in 2018.

Last summer saw a series of escalating attacks targeting oil tankers and other sites around the Persian Gulf.

It reached a crescendo in January with the U.S. drone strike in Baghdad that killed Iranian Gen. Qassem Soleimani and an Iranian ballistic missile strike of American forces in Iraq in retaliation. 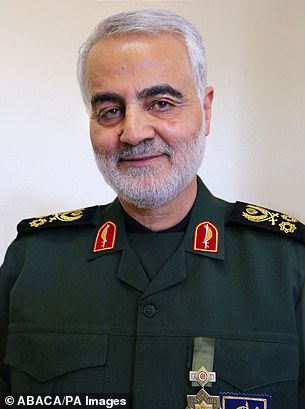 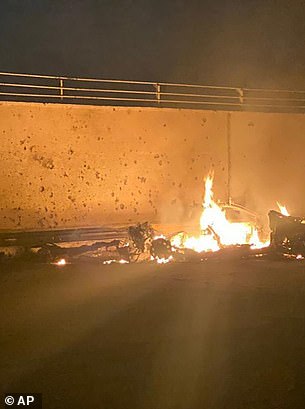 Standoff:  The tensions spiked when U.S. forces killed Iran’s most powerful general, Qassem Soleimani, in January. His Revolutionary Guards launched the Nour satellite and also operate the patrol boats threatened by President Donald Trump in a tweet issued in April

Those tensions had been expected to rise after Iran’s government overcame the initial chaos that engulfed its response to the coronavirus pandemic.

On Sunday, Iran complained to the United Nations and summoned the Swiss ambassador in Tehran, who represents U.S. interests in the Islamic Republic, over possible measures Washington could take against an Iranian fuel shipment to Venezuela.

A senior official Trump’s administration told Reuters on Thursday the United States was considering measures it could take in response to Iran’s shipment of fuel to crisis-stricken Venezuela.

The oil sectors of Iran and Venezuela, members of OPEC, are both under U.S. sanctions.

The administration official declined to specify the measures being weighed but said options would be presented to Trump.

Iran’s Deputy Foreign Minister Abbas Araqchi passed on a message to the Swiss ambassador on Sunday warning against any U.S. threat against the Iranian tankers, according to a report on the foreign ministry website.

Iran ‘reserves its right to take all appropriate and necessary measures and decisive action … to secure its legitimate rights and interests against such bullying policies and unlawful practices,’ Zarif wrote to Guterres.

‘This hegemonic gunboat diplomacy seriously threatens freedom of international commerce and navigation and the free flow of energy,’ Zarif wrote.

‘These efforts by the U.S. to take coercive measures to disrupt Iran’s oil sale is a dangerous escalation.’

At least one tanker carrying fuel loaded at an Iranian port has set sail for Venezuela, according to vessel tracking data from Refinitiv Eikon on Wednesday, which could help ease an acute scarcity of gasoline in the South American country.

Venezuela is in desperate need of gasoline and other refined fuel products to keep the country functioning amid an economic collapse under socialist President Nicolas Maduro.

Venezuela produces crude oil but its infrastructure has been crippled during the economic crisis.