U.S. registered ‘narco jet’ landed on a Mexican highway with almost $20 million worth of cocaine

‘Narco’ plane that landed on a Mexican highway contained $20MILLION of cocaine and was registered in the US, authorities reveal

Mexico’s military confiscated a $20 million cocaine shipment that was unloaded off a jet parked on a Mexican highway near the Belize border on Monday.

The Mexican National Defense Secretary said Monday night that the two-seater aircraft used in ferrying the drugs was registered in the United States.

The drug traffickers landed the Beechcraft King Air aircraft on a two-lane road in Bacalar, a municipality in the Caribbean coast state of Quintana Roo.

The crew had ample time to load a van that was filled with 26 bags containing between 30 to 40 kilos of cocaine.

Officials also revealed that the twin-engine jet departed South America at an unspecified time, most likely Sunday, and was detected in Mexican airspace Monday approximately at 3.30am.

It is unknown if the suspected traffickers were the actual owners of the plane.

The Mexican National Defense Secretary said that the twin-engine aircraft (pictured) that was landed by drug smugglers on a highway in the Caribbean coast state of Quintana Roo on Monday was registered in the United States. At least $20 million worth of cocaine was seized 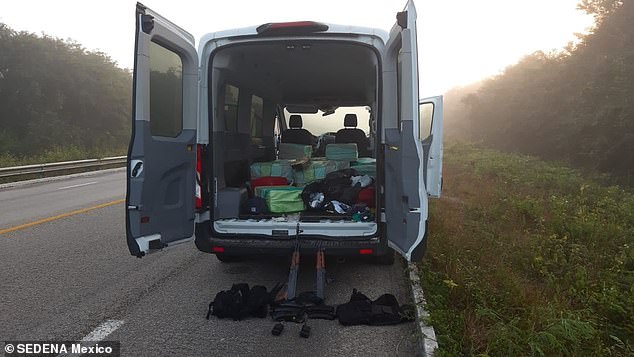 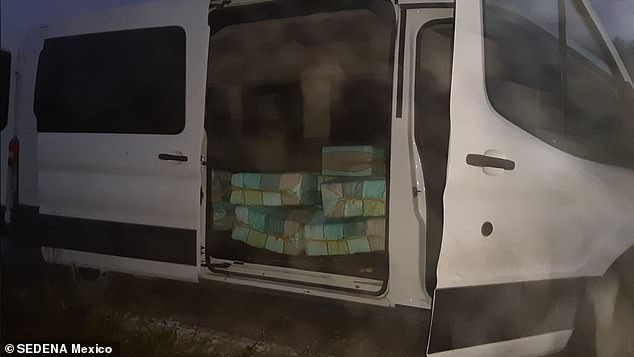 The cocaine was split into 26 bags, each containing between 30 to 40 kilos

The suspects engaged a unit of the 34th Military Zone and killed one of the soldiers, who has not been publicly identified.

Wounded in the attack were 34th Military Zone Commander José Luis Vázquez Araiza and two other servicemen, who were only identified as Sergeant Celestino and First Lieutenant Gabriel.

At least two male suspects were arrested following the confrontation.

The National Defense Secretary also found that the aircraft recently made stops at four airports in Monterrey, Tampico, Toluca y Chetumal without its illegal use being detected by authorities.

‘The General and the other two troop members are in military facilities out of danger with a stable health,’ the National Defense Secretary said.

Located on Mexico’s Caribbean coast, Quintana Roo is home to some of the country’s top tourist destinations, including Playa del Carmen, Cancún, Tulum and Isla Mujeres. 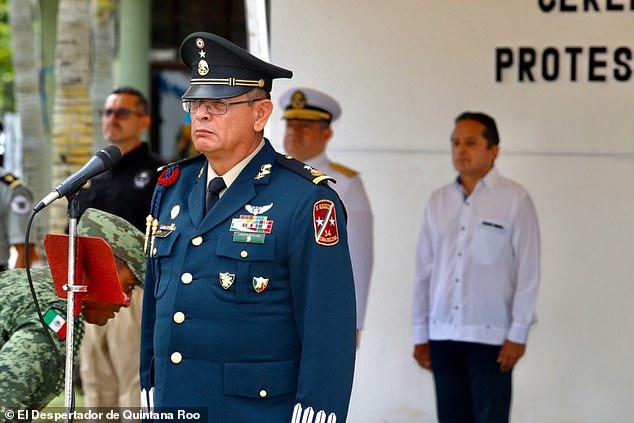 José Luis Vázquez Araiza, commander of the 34th Military Zone, was injured during a shootout Monday with drug traffickers after they landed a modified Cessna on a two-lane road in Quintana Roo, a state on Mexico’s Caribbean coast that is a favorite destination for tourists

However, the state’s tourism image has taken a hit in recent years due to the ongoing violence with local gangs and cartels competing for the lucrative control of drug turf.

On Sunday, authorities came across six dead bodies that around Cancún.

Responding to a call at a home in the northern part of the resort city, police discovered three dead people. In separate incidents, two other bodies were later located found several streets from each other on a dirt road.

Law enforcement encountered the sixth body on the side of a highway that connects Cancún and Punta Sam, not too far from where a new resort is being built.