U2, who hold the world record for the highest-grossing concert tour, are in danger of becoming medium-sized. They now pitch camp in the arenas for two nights, not six, and their albums go gold rather than eight-times platinum. But they still put on a big show.

This tour, billed as Experience And Innocence, is a sister to Innocence And Experience from 2015, and deploys the same giant double-sided screen to bisect the stalls. As a piece of technology, it’s still at the cutting edge; as a piece of stagecraft, it’s still turning bad seats into good ones. In Manchester it achieves the near-impossible, making the Arena feel human.

Bono, The Edge, Larry Mullen and Adam Clayton start singing and playing on a walkway inside the screen, which is a fabulous trick even when you know it’s coming. 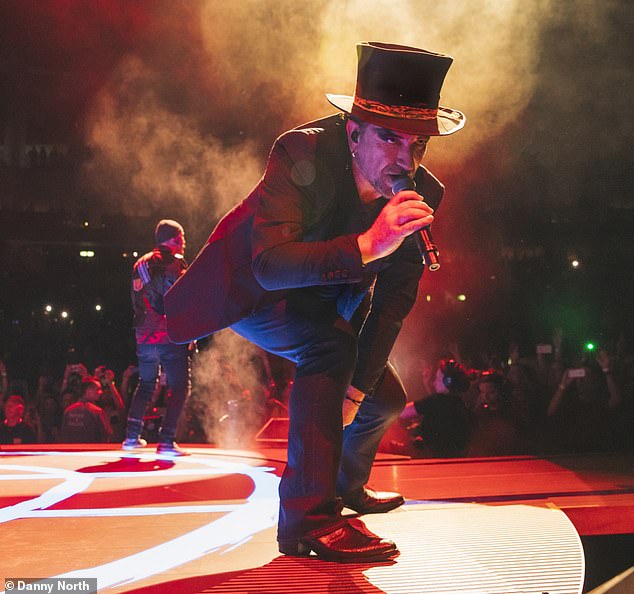 Bono revisits his MacPhisto persona, which turns a natural public speaker into the kind of character you hope not to find on your doorstep at Halloween

All evening the screen pulsates with life, backing up Bono’s little speeches with facts, slogans and sparkling live footage.

The Joshua Tree, performed in full on U2’s short stadium tour last year, has now been shelved altogether, leaving this show to home in on last year’s Songs Of Experience and, less predictably, Achtung Baby.

The new songs are likeable and thoughtful, but not familiar enough to raise the roof. Their 1991 album Achtung Baby scrubs up well, from Acrobat to Zoo Station, although it also encourages Bono to revisit his MacPhisto persona, which turns a natural public speaker into the kind of character you hope not to find on your doorstep at Halloween. 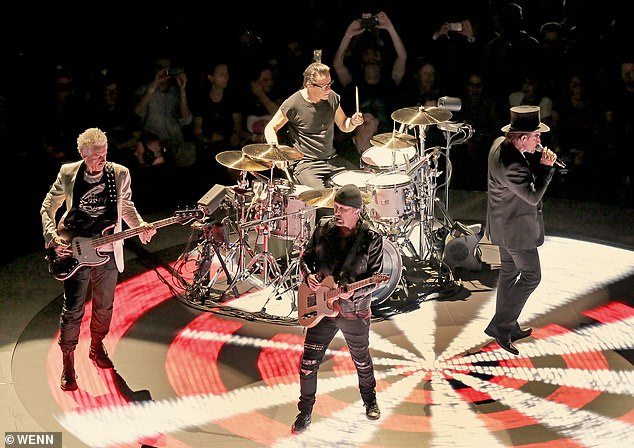 While you miss the Joshua Tree hits, One – repurposed to stand up for women’s rights – makes a gorgeous stand-in encore

The best bits of the evening are unbeatable – a soaring Pride, a ferocious I Will Follow and a rousing New Year’s Day, originally inspired by Lech Walesa, now banging the drum for European unity.

And while you do miss the Joshua Tree hits, One – repurposed to stand up for women’s rights – makes a gorgeous stand-in encore.

By the end, U2 have shown that they can live without With Or Without You.

When David Byrne brought his American Utopia show to Britain in June, it was the best gig I’d seen in 15 years. So good, in fact, that I hesitated to see it again.

Could something so sensational ever be repeated? Would an evening packed with surprises be as much fun if you knew what to expect? And would its quirky magic survive the leap from theatres to arenas?

Yes, yes, yes. The chief brainwave from Byrne and his choreographer, Annie-B Parson, was clearing away all the clutter of the concert hall, from the amps to the drum riser, to leave an empty space to play with. And if there’s one thing arenas do well, it’s empty space. The stage is the same silver box, writ larger still, and flanked by video screens. 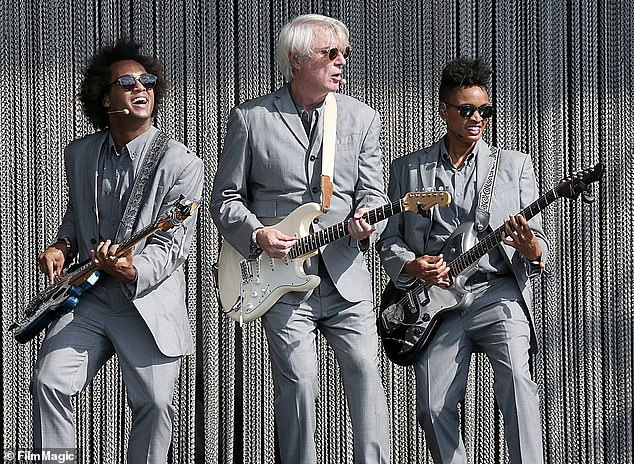 When David Byrne (centre) brought his American Utopia show to Britain in June, it was the best gig I’d seen in 15 years. So good, in fact, that I hesitated to see it again

There are still surprises to be sprung, because even the most memorable evening only stays with you as a set of snapshots, and a show this bold can take your breath away all over again. It has audacity to Byrne.

Novelty turns out to be just one of its strengths. Great music doesn’t become any less great when we hear it again. And there’s still a thrill in the musicians’ freedom of movement.

Byrne and his 11-strong band make full use of it, doing little dance routines that are like The Temptations with a twist of Antony Gormley. Never has so much joy been expressed by 12 people in grey suits.

This is not the Byrne of Psycho Killer, itching to unnerve us. It’s the Byrne of I Zimbra, Remain In Light and all those Brazilian compilations, the man who once said that the purpose of music was ecstatic release.

He finds it here with a delirious Once In A Lifetime, a delicious This Must Be The Place, a skittish Lazy and a barnstorming Burning Down The House.

The seven songs from American Utopia, the album, are witty and likeable. The nine from Talking Heads are immense, confirming the suspicion that they were the greatest of all the post-punk bands, just pipping The Clash.

The set list ends up even better than last time as Byrne digs out Road To Nowhere, stirring as ever and rather too topical. The Talking Heads fans were hoping for Life During Wartime too, but, even without it, this is some party, this is some disco, this is some fooling around.

It’s the kind of evening when the lure of the merchandise stall is hard to resist. Byrne being Byrne, even the merch is quirky. You may never get a better chance to say ‘Been there, done that, bought the tea towel’.

There are still, astonishingly, some good seats left for the O2 concert tomorrow. Hope to see you there. 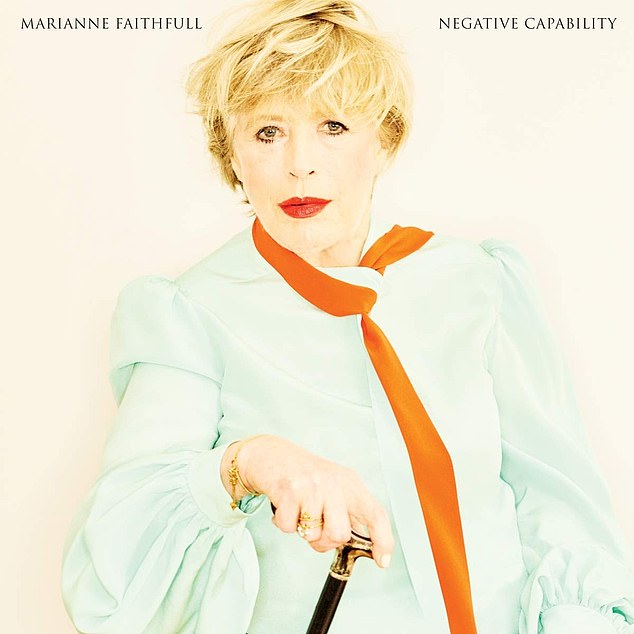 Marianne Faithfull has been recording since the Sixties, but she’s done some of her best work in the 21st century. Negative Capability continues a fine run, enlisting Nick Cave and others for a poised, gritty record of aged wisdom, songs for lost friends and topical dread 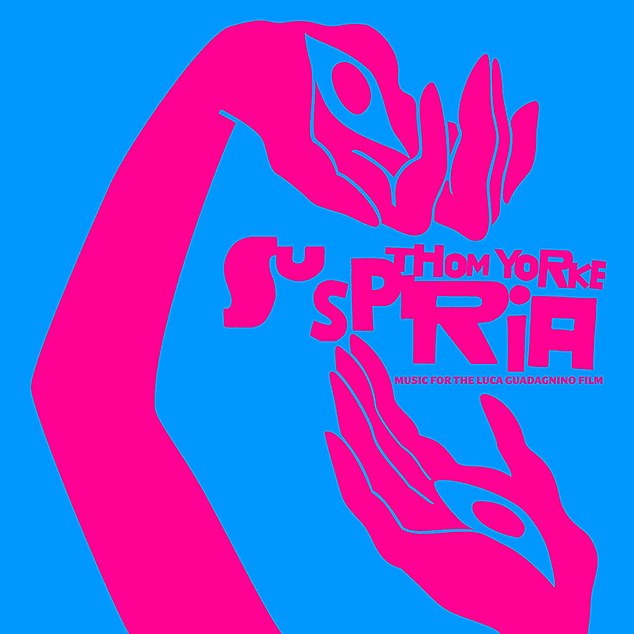 The Radiohead frontman’s score to a remake of a cult Italian horror film mixes fully fledged songs (including elegant piano ballads) with atmospheric pieces that use antique-sounding synthesisers, choral voices and orchestral scrapings to dramatic effect 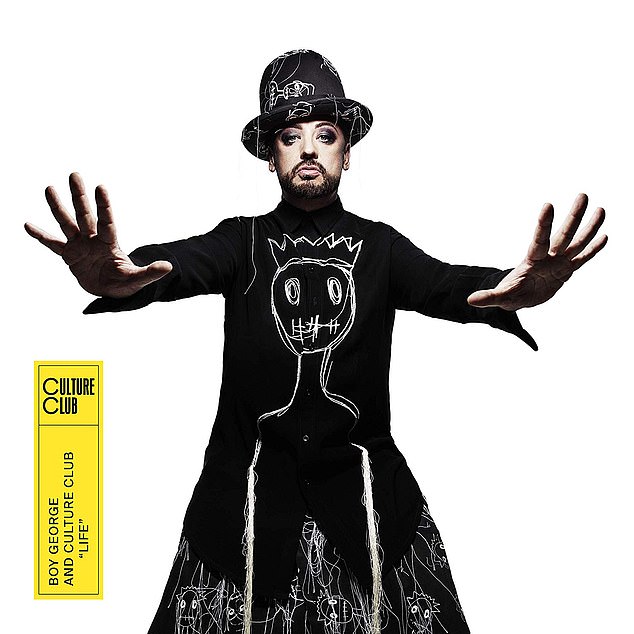 The dark, bassy opener suggests the band’s first album in 25 years will be something weighty, but it’s followed by cheery soft reggae and gospel-pop – decent enough tunes, all hoiked up a notch by the ever familiar and always impressive voice of Boy George