This is the shocking moment an Uber driver was caught watching TV behind the wheel with a customer in his car.

Duncan MacLeod, 27, thought nothing of it when his taxi driver asked if he could listen to the football during his journey to London’s ExCeL centre yesterday.

But he was stunned when he looked up from his phone to see the man watching it on an iPad while navigating the capital’s busy roads.

The YouTuber filmed the incident and reported it to the police before slamming the app on social media.

He told MailOnline: ‘I was honestly shocked anyone who drives for a living would break the law like that with a customer in the car.

‘He told me not to worry and it was perfectly safe.

‘I definitely stopped using my phone and was watching the road.

‘I took the video after that and it was pretty clear he was regularly glancing at the screen while driving, even during the ads.

‘Uber have suspended him and contacted me. They said if I wanted to involve the police they would provide all the drivers information.’

Mr MacLeod was in the car for 35 minutes, travelling from north London, but didn’t realise what was happening until part-way through the journey.

He said: The driver asked if it would be ok if he listened to the football, I was working on my phone and I said it would be fine. 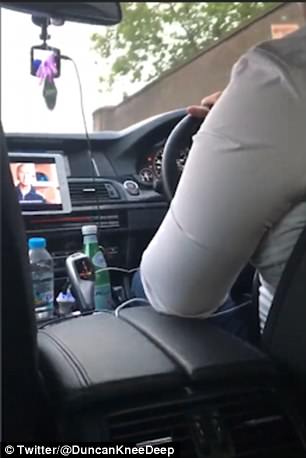 ‘When I looked up and saw he was watching the football on an iPad I said it didn’t seem safe.

‘What’s crazy is because I wasn’t paying attention he was probably watching the football for 20-25 minutes before I noticed.  I could hear it but assumed it was the radio.’

‘I’ve had hundreds of uber rides all over the world and never had an issue like this.

‘The worst I’ve had is drivers whose cars weren’t clean or who took a longer route to boost the fare. I don’t think this is the norm.’

Mr MacLeod, 27, took to Twitter to express his shock before sharing a clip of the incident

‘It goes from bad to worse. My driver was watching F***** TV while he drove.

‘Starting to understand why they had their licence in this city removed. That’s not safe and it’s illegal…’

Uber confirmed the driver has been suspended while they investigate the incident.

A spokesman told MailOnline: ‘This is totally unacceptable behaviour and we are investigating.

‘It’s our policy to prevent licensed private hire drivers from using our app while we investigate serious incidents.’

A Met Police spokesman added: ‘A referral was made to police on Saturday, 26 May via @MetCC from a member of public concerning a road traffic offence. This referral is being assessed by the roads and transport team.’  No arrests have been made in connection to the incident.

Uber is currently awaiting the outcome of their appeal of Transport for London’s to revoke their licence to operate in the city over safeguarding claims.

Drivers are still allowed to work for the company until the decision comes in June.