An Uber driver tried to make a speedy exit from a shopping center but instead ended up getting stuck on a flight of stairs.

The white Toyota Camry was lodged on a flight of stairs outside a Safeway supermarket in San Francisco on Monday.

Its driver, who has only been identified as Fred, is now blaming the Uber app for telling him to take the stairs, according to Business Insider.

An Uber driver mistakenly drove down a flight of stairs outside a Safeway supermarket in San Francisco on Monday. The San Francisco Police Department called it a ‘freak accident’

Fred told Business Insider that he’s been driving for Uber for less than a year.

Uber has been made aware of the incident and is investigating what happened during the accident.

The ride-hailing giant has confirmed that the driver was on the app at the time of the incident.

Additionally, Uber is continuing to reach out to the people involved in the accident to make sure they’re OK.

He said Safeway should make some changes to its parking lot in order to prevent similar accidents from happening in the future.

Fred, who didn’t suffer any injuries from the accident, added that he would never drive in the area again. 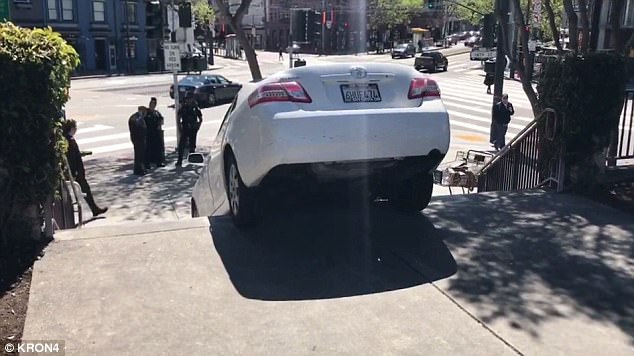 The driver, who is only being identified as Fred, started working for Uber less than a year ago. He blamed the Uber app for telling him to drive down the stairs 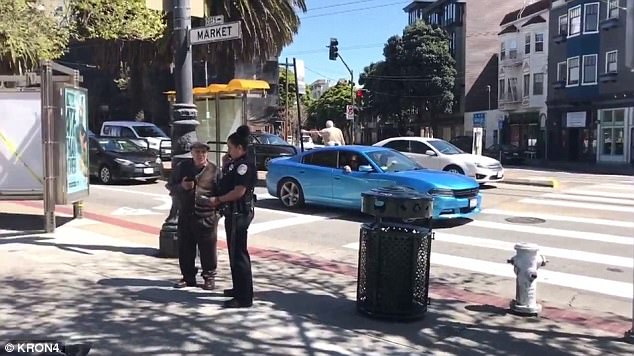 It took a tow truck more than an hour to remove the car from the stairs. Officials tried to use a cable to safely lower the vehicle, when it snapped, sending the car crashing into a trash can 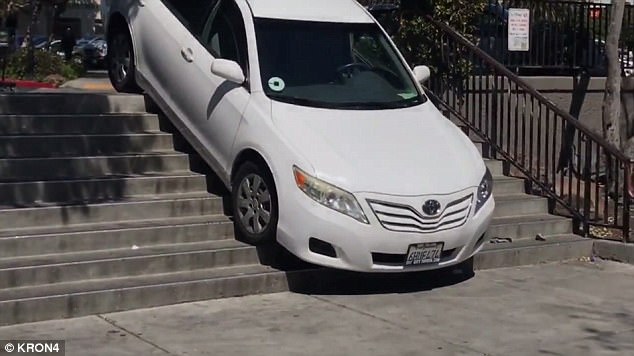 Two passengers were in the car at the time of the accident but neither sustained any injuries. The driver was on his way to pick up a third Uber Pool passenger when he took a nosedive down the stairs at about 1:23p.m. (PST)

Two passengers were in the car at the time of the accident but neither sustained any injuries.

The driver was on his way to pick up a third Uber Pool passenger when he took a nosedive down the stairs at about 1:23p.m. (PST).

Not long after the incident, some bystanders called a tow truck to move the marooned car.

But the car wasn’t actually freed from the grips of the concrete stairs until about 3:00p.m. (PST).

A tow truck attempted to safely remove the car from the steps using cable when suddenly it snapped, causing the car to plow into a public trash can, Business Insider reported.

As a result of the impact, the garbage can was knocked off of the screws anchoring it to the ground.

The San Francisco Police Department called the ordeal a ‘freak accident’ and said the driver was a senior a citizen, according to KRON 4.

It seems that Fred isn’t the first person to mistake the stairs as a possible exit.

In 2014, a taxi cab driver mistakenly thought the stairs were an exit and the car took a nosedive.

The driver’s manager noted that the operator was ‘new to the job.’

Some are now saying the accident is evidence that self-driving cars aren’t quite ready for primetime.

Their point was that if humans can’t safely operate a vehicle, then we likely can’t trust an unmanned machine to do it yet either. 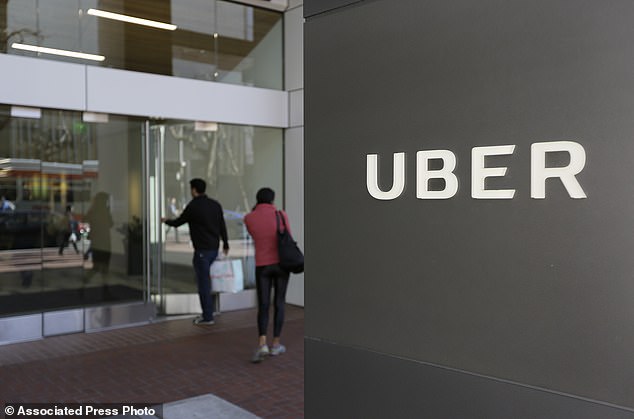 HOW DID AN UBER AUTONOMOUS VEHICLE HIT AND KILL A WOMAN IN ARIZONA?

A self-driving Uber vehicle struck and killed a pedestrian in the first death involving a fully autonomous test vehicle on March 19, 2018.

The accident prompted the ride-hailing company to suspend road-testing of such cars in the US and Canada.

The Volvo SUV was in self-driving mode with a human back-up operator behind the wheel in Tempe when a woman walking a bicycle was hit.

Police have said that the victim, 49 year old Elaine Herzberg, stepped out in front of the car suddenly and they do not believe the car was to blame.

The testing has been going on for months as car makers and technology companies compete to be the first with cars that operate on their own.

Uber’s self-driving car crash that led to the death of a mother-of-two could have been avoided, driverless vehicle experts have claimed.

Cortica, a firm that develops artificial intelligence for autonomous vehicles, has analysed the dash cam video.

The company concludes the car, which failed to brake or swerve before the collision, had enough time to react and potentially save Ms Herzberg’s life.

He said the autonomous car’s cameras and radar system should have had enough time to pick up the pedestrian and react to the situation.

Driverless cars are fitted with a system of cameras, radar and lidar sensors that allow them to ‘see’ their surroundings and detect traffic, pedestrians and other objects.

An AI computer system then decides what actions the car takes to avoid a collision – a setup that is supposed to work as well at night as during the day.

A top executive for the maker of Lidar sensors used on Uber’s self-driving car said she was ‘baffled’ as to why the vehicle failed to recognise Ms Herzberg.

That’s after one of Uber’s self-driving vehicles was involved in a fatal crash last week.

The incident is being regarded as the first fatal crash involving an autonomous car.