Uber driver tried to groom girl, 14, while driving her home

An Uber driver who told a 14-year-old passenger she ‘looked hot and had nice lips’ has been spared jail.

Spyros Ntounis, 35, slowed his car down to 5mph so he could have more time with the teenage passenger after she used the app to book a journey home from a night out at a friend’s home.

After her boyfriend helped her into the cab, Ntounis asked who he was and how old he was.

Allister Walker, prosecuting, said the driver told the girl she ‘looked hot and had nice lips’ while driving her from Barnes to Kingston-upon-Thames in southwest London.

Ntounis then gave the girl some chewing gum, before giving her his mobile number after she told him she did not have an Uber app.

Towards the end of the journey, last April, he slowed the vehicle down and when she asked why he was doing so, he said it was he could spend more time with her.

The next morning Ntounis started sending WhatsApp messages to the schoolgirl asking if she was okay and offered to ‘give her lessons’ in anything she wanted.

Ntounis then sent her further messages asking when they could next meet up, before questioning whether he had ‘passed the age test’, jurors at Kingston Crown Court heard.

The teenager showed her parents, who urged her to block him on WhatsAapp and contact the police.

The driver had faced three complaints from previous female passengers.

Another complaint was lodged in November 2016 after Ntounis started talking to a passenger about ‘inappropriate things’.

He also stared at her for long periods and slowed down during the journey.

The third complaint was made on April 21, just hours before Ntounis targeted the 14-year-old girl.

The passenger said Ntounis asked her if he could ‘satisfy her needs’.

Ntounis’ private hire licence was suspended as a result of the allegations.

He was convicted of attempting to meet a girl under 16 years of age following grooming after a trial at Kingston Crown Court last month.

The court was told the driver’s face has been plastered over 17 Greek television stations and newspapers following his conviction. 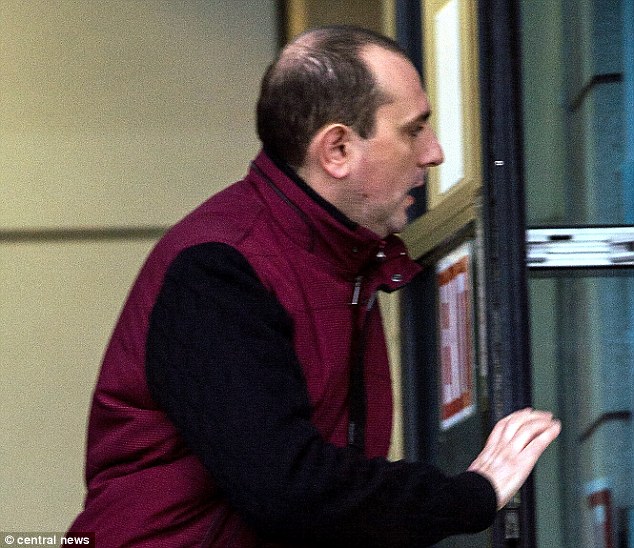 Ntounis, pictured, was also ordered to take part in a 60-day sexual rehabilitation programme and was made subject to a sexual harm prevention order by the judge until further notice

Judge Timothy Lamb QC told him: ‘You stand before this court having been convicted by a jury of what is without any doubt an extremely serious offence..

‘It is said the pre-sentence report makes depressing reading and so it does.. Normally, one would expect the defendant between the trial and the conviction to show some remorse.

‘What I get from the report is you have clearly lack insight to how unlawful and unacceptable your actions were.

‘Normally, you would be sentenced for two years but in principle you would serve one and be realised.

The victim’s mother told the court before Ntounis was sentenced: ‘This has hung over her. She had her mock GCSEs at the time of the trial which did not go ahead because Mr Ntounis was not in the country.

‘It has been a stress on her and she would like to get on with her life.’

Ntounis has one precious conviction of dishonesty from October 2014, for which he was handed a 12 month suspended sentence for 24 months.

Ntounis, from West Ealing, denied but was convicted of attempting to meet a girl under 16 years of age following grooming.

He was given a 20 months jail sentence suspended for 18 months and placed on the sex offenders register for ten years.

Ntounis was ordered to take part in a 60 day sexual rehabilitation programme and a sexual harm prevention order was made by the judge until further notice.

An Uber spokesman said: ‘This was a shocking incident and we welcome the conviction of this driver. Every driver who uses Uber in the UK has been licensed for private hire by a local authority, which includes going through an enhanced background check. Any previous offences would appear in those background checks as part of the licensing process and are only shown to the licensing authority.

‘Every trip on our app is tracked by GPS and we have supported the police in helping to bring this licensed driver to justice. We recognise we need to go further to enhance safety, which is why we now pass directly to the Metropolitan Police information about any serious incident reported to us.’