‘Oh, I was hungry’: Uber Eats delivery driver refuses to apologize for eating his customer’s order of Buffalo Wild Wings after he was caught on security camera tucking in

An Uber Eats customer was shocked to discover a delivery driver eating his meal after he watched security footage and noticed it had been tampered with.

Richard Jackson, who lives in the Austin neighborhood of Chicago, Illinois, was looking forward to enjoying 15 boneless chicken wings from his local Buffalo Wild Wings restaurant.

But the after spotting sauce smeared all over the bag and realizing the man arriving at his door had already tucked into it, the order became less appealing.

‘He’s walking along the grass and then my camera happened to pick him up. I gestured towards my camera,’ Jackson told CBS News about the incident. ‘He was clearly caught digging into my food. 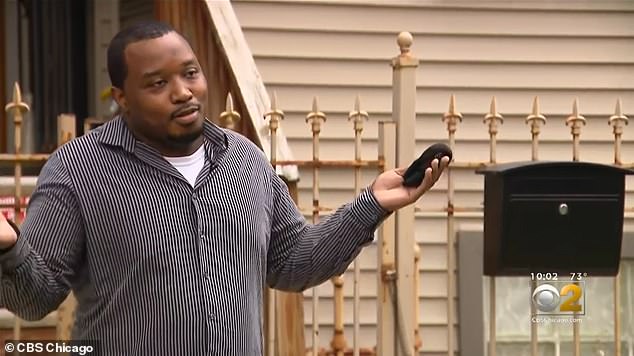 Richard Jackson, who lives in the Austin neighborhood of Chicago, Illinois, saw the breech in protocol via his security cameras and spotted sauce smeared on the bag

‘He was digging into the bag, you know, sort of chucking the boneless wings – repeatedly popping them in. This is when I see the sauce smeared all over the bag. It’s missing several pieces of the chicken.’

The video appears to show the driver reaching into the bag almost immediately after getting out of the car.

Footage from one of Jackson’s several cameras around his property shows him refusing to accept the order after an inspection.

‘I did challenge him on why he was eating my food,’ Jackson said.

‘He eventually admitted to eating my food. He said, “Oh, I was hungry.”‘

The driver was not the same one originally assigned to his order, Jackson said.

Jackson got a refund for the meal but he is not happy with the restaurant for not putting a tamper-proof seal on the container. 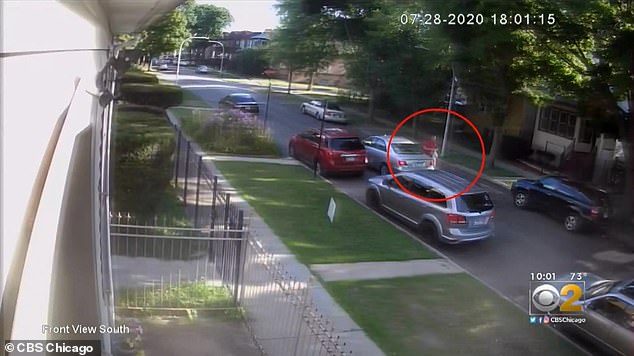 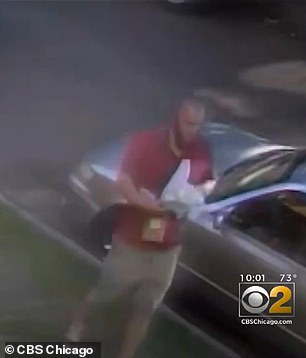 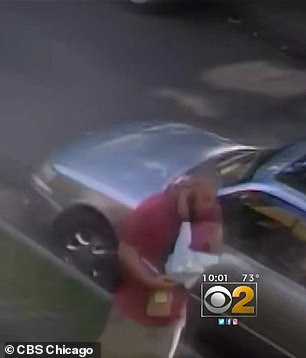 Footage shows him reaching into the bag from Buffalo Wild Wings in Chicago, Illinois

‘It’s concerning that he was so nonchalant,’ Jackson said, ‘especially during a pandemic where we have a highly transmissible disease.’

A large number of businesses have been relying on food delivery orders amid the pandemic.

According to Uber, 82 percent of restaurant operators say Uber Eats has been crucial to business during COVID-19 and 75 percent of operators said that they would have had to close their business if not for Uber Eats.

A whopping 81 percent said they would have had to lay off staff members if not for third-party delivery and Uber Eats partners have reported more impact from the app than others during the crisis, including a larger increase in sales. Some partners saw sales increase by more than 40 percent.

CBS reported that s 2019 U.S. Foods study found 28 percent 500 delivery worker polled admitted to eating customers’ food and more than half said they were tempted by the smell. 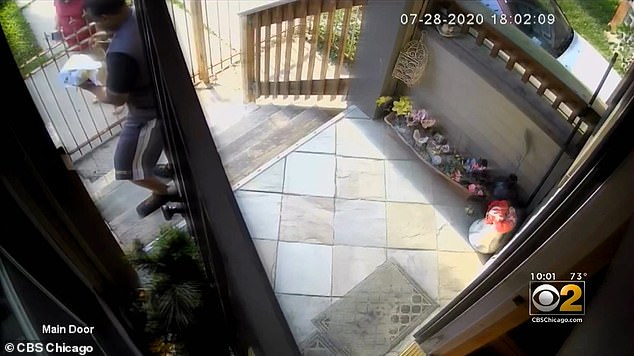 ‘He eventually admitted to eating my food. He said, “Oh, I was hungry”,’ Jackson told CBS News