Travis Kalanick was berating his top executives for suggesting Uber had an image problem when video leaked that showed him screaming at a company driver following a night of drinking.

In the new book Super Pumped, it is revealed that Kalanick arrived to a meeting to learn that the collective group had determined most people believed Uber’s image at the time was: ‘A bunch of young bro bullies that have achieved ridiculous success.’

Kalanick did not care for this according to writer Mike Isaacs, who was told by one individual present at the time that the company founder said: ‘Nuh-uh. I don’t believe it, man. I don’t see it.’

At that exact moment, video of Kalanick’s meltdown in the backseat of an Uber was beginning to circulate online, causing much panic for those present at the meeting.

he beginning of the end: Uber founder Travis Kalanick (above in 2018) was arguing with his staff over their assessment of the company and its images problem when damning video leaked 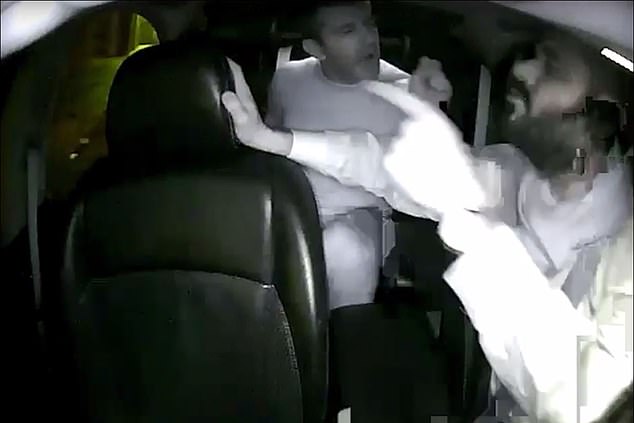 Drinking and driving: That video showed him berating a company driver (above) who said he had gone bankrupt trying to keep up with Uber’s shifting requirements

Kalanick responded by calling Arianna Huffingtion and then declared that he needed a PR team, to which his top two communications executives scoffed, saying that they were best equipped to deal with the crisis.

That statement prompted Kalanick to declare in front of all those present: ‘You two aren’t strategic or creative enough to help us get out of this situation.’

The two women, Rachel Whetstone and Jill Hazelbaker,collected their things and walked out, forcing Kalanick to chase them down the hallways and beg them not to quit.

He first had to deal with a harsh and expletive-laden dressing down from the women, with Whetstone getting in his face while she screamed: ‘How dare you! I’ve walked through fire for you and this company! You did this TO YOURSELF!’

Whetstone told him that was not entirely true, explaining: ‘You aren’t a terrible person. But you do do terrible things.’

It was after this that a plan to replace Kalanick began being put into place.

The embattled founder of Uber ultimately resigned during a pivotal, and increasingly problematic, time for the company.

It was not by choice however, with five of the company’s biggest investors demanding his resignation according to The New York Times, who obtained a copy of the letter those individuals sent to Kalanick.

In the aftermath of that shocking revolt by the company’s primary shareholders, it was revealed that while Kalanick was out as CEO he would remain a member of the Uber board.

‘I love Uber more than anything in the world and at this difficult moment in my personal life I have accepted the investors request to step aside so that Uber can go back to building rather than be distracted with another fight,’ said Kalanick.

Meanwhile, one of the investors who demanded Kalanick step down, Bill Gurley of Benchmark, stepped down from his post on the company’s board of directors on Wednesday.

Gurley had been Kalanick’s loudest detractor prior to that, growing increasingly frustrated after Uber employee Susan Fowler wrote about her year working at the company.

Fowler alleged that she and other women at the company were subject to constant harassment by men, and that when she did take complaints to human resources they were always dismissed and nothing was done to change the toxic environment.

She even claimed that at one point an employee with the HR department stated that shew might be the problem, and not the men.

It was not just that either, and Fowler also detailed some members of the staff as doing everything they could to rise up in the ranks while sabotaging not only other workers but also the productivity of the company.

Gurley was replaced by Matt Cohler, his co-worker at the venture firm and a close friend of Sandberg.

It is unclear if he waited to take the position until after Sandberg made it clear that she would not take the job to avoid any possible conflicts of interest, as Gurley seemed to have already planned his exit.

In the end, it was Dara Khosrowshahi who landed the gig, and earlier this year the company finally went public in what was one of the most disappointing IPOs of the year.

Kalanick still walked away with billions.