Elaine Herzberg, 49 (pictured), was killed after she was struck by an Uber vehicle in Arizona in the first pedestrian death via a self-autonomous car

Uber’s automated car which struck and killed a woman at 40mph did not show significant signs of slowing down, a spokesman for police has now confirmed.

The firm has suspended all its self-driving tests after what is believed to be the first fatal pedestrian crash involving its vehicles.

Automated driving had been taking place in Phoenix, Pittsburgh, San Francisco and Toronto.

Police in the Phoenix suburb of Tempe say one of Uber’s self-driving vehicles struck and killed a pedestrian on Sunday night.

According to police, Herzberg was hit by an SUV (pictured) around 10pm on Sunday in Tempe when she was walking her bicycle outside of a crosswalk

Investigators said the Volvo SUV was in autonomous mode when the woman, 49-year-old Elaine Herzberg, was hit.

She later died in hospital.

Police in Tempe say the victim was pushing a bicycle across the street, and ‘may have been homeless’.

There was a safety driver behind the wheel of the vehicle, identified as Rafael Vasquez, 44.  There is no sign that the driver was impaired, the force says.

Sergeant Ronald Elcock said in a press conference: ‘The safety of our citizens here in Tempe is of the utmost importance.

‘None of us ever want to go through this ever again, using the crosswalks will definitely limit this from happening again.’

In a statement, an Uber spokesperson said the company is aware of the incident and is ‘fully cooperating with local authorities in their investigation’.

Uber chief executive Dara Khosrowshahi expressed condolences on his Twitter account and said the company is working with local police on the investigation.

The accident in suburban Phoenix could have far-reaching consequences for the development of self-driving vehicles, which have been billed as potentially safer than cars with humans at the wheel. 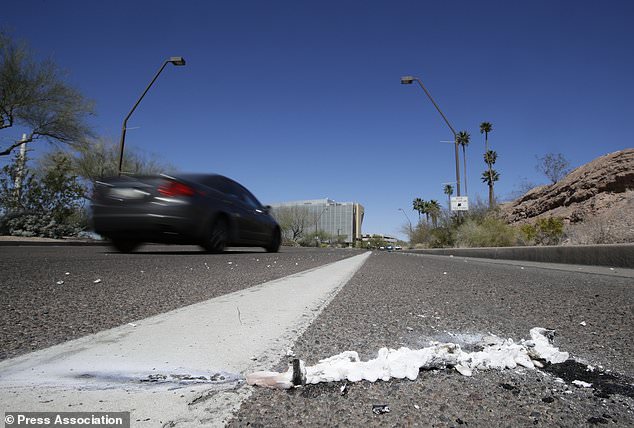 Uber’s automated car which struck and killed a woman at 40mph did not show significant signs of slowing down, a spokesman for police has now confirmed. Cars go by the scene 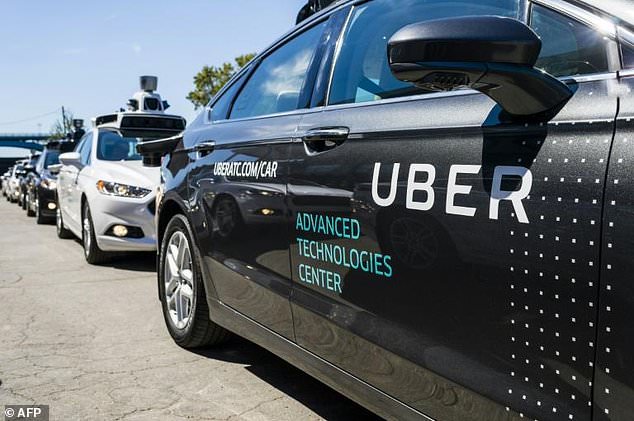 The firm has suspended all its self-driving tests after what is believed to be the first fatal pedestrian crash involving its vehicles. Automated driving had been taking place in Phoenix, Pittsburgh, San Francisco and Toronto. Pilot models of the self-driving car developed by Uber

The testing has been going on for months as car makers and technology companies compete to be the first with cars that operate on their own.

The crash could be a setback for autonomous vehicle research and may lead to stricter regulations from states and the federal government, said Bryant Walker Smith, a University of South Carolina professor who studies the technology.

But he said more than 100 people die each day on US roads in crashes of human-driven vehicles.

‘That’s a real contrast that we should keep in mind about this,’ he said. ‘We should be concerned about automated driving. We should be terrified about human driving.’

The federal government has voluntary guidelines for companies that want to test autonomous vehicles, leaving much of the regulation up to states.

Many states, including Michigan and Arizona, have taken a largely hands-off approach, hoping to gain jobs from the new technology, while California and other states have taken a harder line.

Some incredibly sad news out of Arizona. We’re thinking of the victim’s family as we work with local law enforcement to understand what happened. https://t.co/cwTCVJjEuz

Uber chief executive Dara Khosrowshahi expressed condolences on his Twitter account and said the company is working with local police on the investigation.

California is among those that require manufacturers to report any incidents to the motor vehicle department during the testing phase. As of early March, the agency had received 59 reports.

The Department of Transportation is considering other voluntary guidelines it says will help foster innovation.

Transportation secretary Elaine Chao has said technology and motor companies need to allay public fears of self-driving vehicles, citing a poll showing that 78 per cent fear riding in them.

The number of states considering legislation related to autonomous vehicles has gradually increased each year, according to the National Conference of State Legislatures.

The crash in Arizona is not the first involving an Uber autonomous test vehicle. In March last year, an Uber SUV flipped on to its side, also in Tempe.

No serious injuries were reported, and the driver of the other car was cited for a violation.

Ms Herzberg’s death is the first involving an autonomous test vehicle but not the first in a car with automated control features.

The driver of a Tesla Model S was killed in 2016 when his car, operating on its Autopilot system, crashed into a lorry in Florida.

The National Transportation Safety Board (NTSB) said driver inattention was to blame, not the vehicle’s autopilot system.