Friends of the Uber operator whose self-driving car struck and killed a pedestrian on Sunday night have spoken to DailyMail.com to defend her, after a new video appeared to show her looking distracted just before the crash.

In the footage, Rafaela Vasquez, 44, is seen apparently looking down at something inside the Volvo XC-90 SUV in the seconds before the vehicle collided with Elaine Herzberg, 49.

The clip was released by police in Tempe, Arizona, on Wednesday.

The car does not appear to slow down before the crash, and police told the Phoenix New Times that neither the car nor the driver braked ‘significantly’ before impact.

But close friend Sarah Stek, 44, described Vasquez as ‘responsible and intelligent’ and said blaming her would be unfair because she could have simply been adjusting the vehicle’s controls.

Speaking exclusively to DailyMail.com, she said Vasquez has been left feeling ‘devastated’ by the fatal crash and added: ‘She isn’t doing too good right now’. 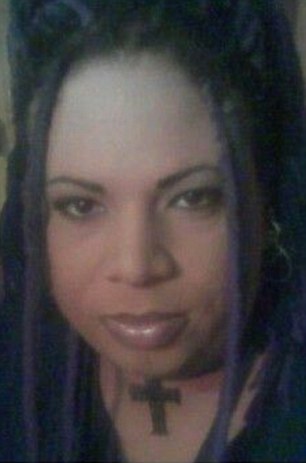 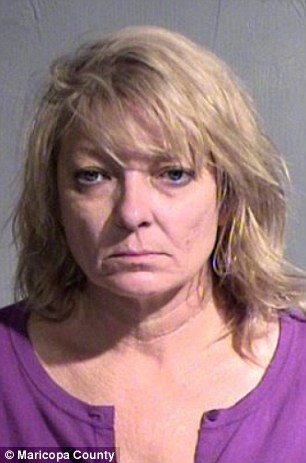 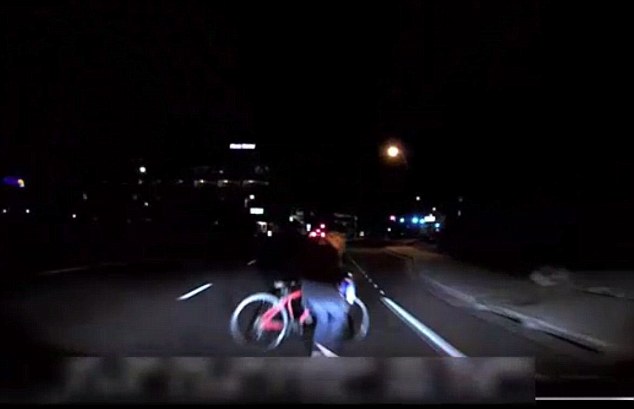 Seconds later, the pedestrian suddenly comes into view. The video released by Tempe police shows the car driving at what appears to be a reasonable speed along a relatively empty roadway 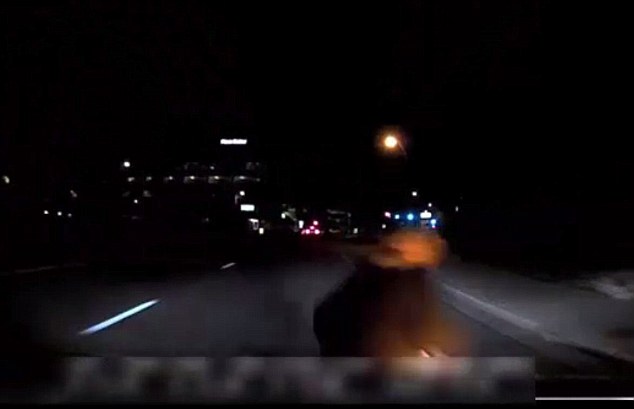 The clip stops just a split second before impact. The victim was later identified as Elaine Herzberg, 49

She told police that Herzberg, who had spent time in prison for drug offenses, stepped out in front of her with a bicycle carrying multiple shopping bags and that she had no time to brake before it hit her.

She was traveling at 38 mph at the time, well within the 45 mph speed limit and insisted that she was alert but that nothing could have been done to stop the crash.

Stek said the footage did not tell ‘all the facts’ and added: ‘It could be that she was changing the radio, you know.

‘She might have been checking something on the vehicle so I’m going to reserve judgement until I know all the facts. Maybe it was something she had to look at for the car.’

Stek, who first met Vasquez when they were middle school students in Tucson, added: ‘How much time do you have to react even if you did see someone come out in front of you? When it’s that dark, how much reaction time do you have to say, oh, the computer’s not stopping the car, I’ve got to do it?’

Uber employs approximately 400 safety drivers like Vasquez, whose job it is to take over should the car’s sensors fail to detect an object in its path and to deal with difficult driving conditions.

Drivers are sent on a three-week training course before being allowed on the road and must pass Uber’s background check – which screens out felons with convictions less than seven years old and those who have been involved in three or more minor traffic incidents in the preceding year.

Vasquez has a felony conviction for attempted armed robbery dating from 2001 and served nearly four years in jail, too long ago for Uber to rule her out.

Her four minor driving citations, revealed by DailyMail.com on Wednesday, would also have not prevented her from taking a job with Uber because they were spread out over a decade, between 2007 and 2017.

On Monday, Tempe Police Chief Sylvia Moir described the accident as ‘unavoidable’ based on viewing video footage of the crash.

‘The video is disturbing and heartbreaking to watch, and our thoughts continue to be with Elaine’s loved ones,’ an Uber spokesperson told The Wall Street Journal.

‘Our cars remain grounded, and we’re assisting local, state and federal authorities in any way we can.’

The 21-second clip, taken on cameras mounted inside the Volvo, show Herzberg emerging out of the darkness to the left of Vasquez’ Volvo with her bicycle and shopping bags.

She was crossing North Mill Avenue, a four-lane highway with a wide central meridian, approximately 100ft south of the junction with Curry Road which is furnished with crosswalks.

The 49-year-old had already crossed three lanes of moving traffic and the central meridian when she loomed out of the darkness to Vasquez’ left seconds before she was struck. 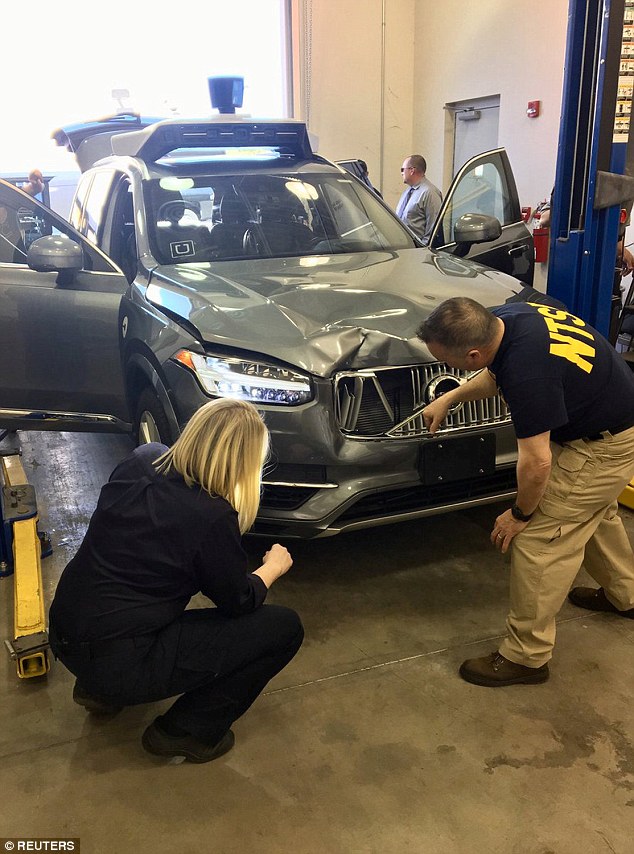 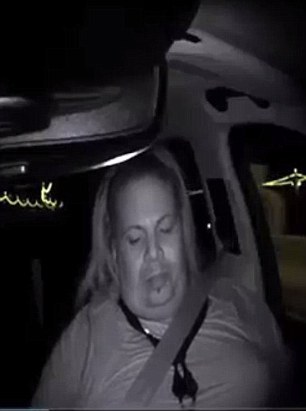 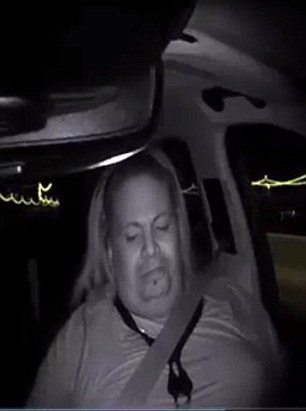 In another frame, the driver, Rafaela Vasquez, is seen behind the wheel as the car rides on its own 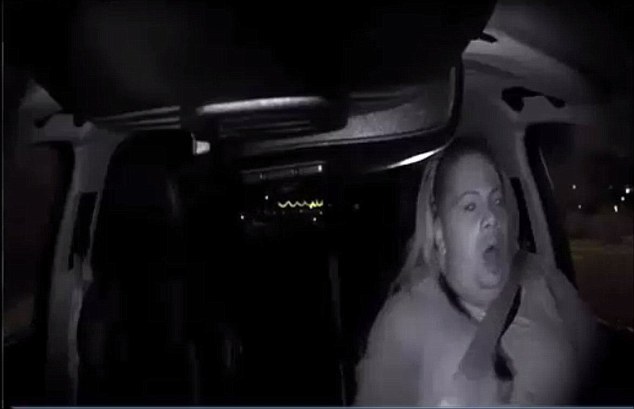 Seconds later, Vasquez grows alarmed when she realizes the car is about to hit the pedestrian

At the time, the car was traveling at 38mph in a 45mph zone. Vasquez told police she had tried to brake but was unable to stop in time. A look of shocked horror is clearly visible on her face in the clip.

Investigators from the National Highway Traffic Safety Administration and the National Transportation Safety Board are now delving into whether it was human error or a problem with the vehicle itself that caused the crash.

In a news release, the NHTSA said they would be looking to ‘address the vehicle’s interaction with the environment, other vehicles, and vulnerable road users such as pedestrians and bicyclists’.

In the meantime, attention has focused on Vasquez who was born with the name Rafael and grew up in Tucson with her father Rafael Sr, 81, and step-mother Corinne, 70.

According to Stek, who dated Vasquez for two years from the age of 14 and still lives in Tucson, the 44-year-old was intelligent and popular with school friends.

She said: ‘She was very intelligent, a little unruly, you know. She had a lot of friends.’ Of her family, Stek added: ‘They’re nice people. Definitely upper middle class. Educated.’

A second school friend, realtor Justin Dempsey, 44, added: ‘He was a nice guy and I wish all the best for him. He was always nice to me back in seventh grade. Now we keep in touch through Facebook.’

But Vasquez also had problems at home, after her mother died when she was three and her father swiftly remarried. 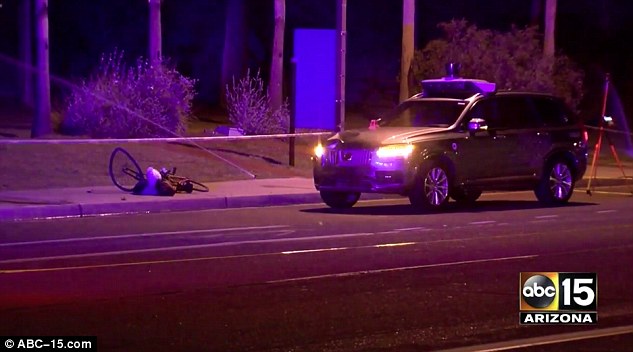 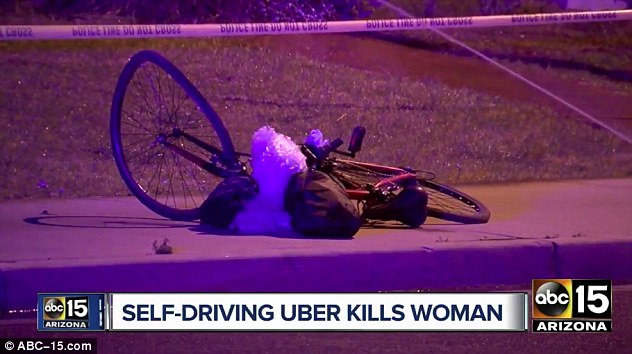 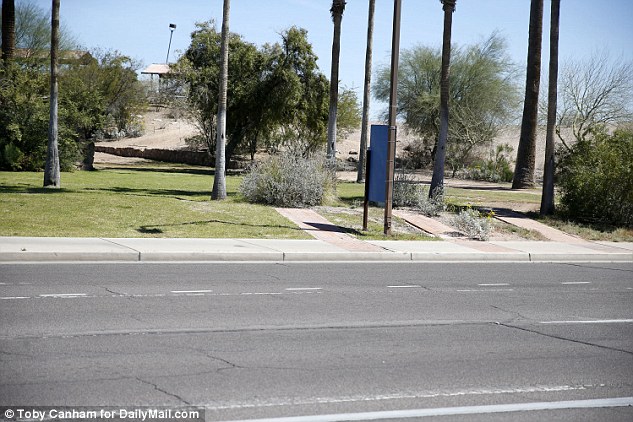 Crash scene: This is where the Uber self-driving car hit Elaine Herzberg, killing her as she crossed the road with a bike loaded with bags

Stek says she ‘didn’t really get along with’ her step-mother – a situation that still endures today.

According to Stek, Vasquez’ family’s Catholic faith also made her life difficult and said being transgender in that household ‘wouldn’t be easy’.

After completing high school, Vasquez moved to Phoenix and it was there in 2000 that she was convicted of attempted armed robbery after conspiring with a friend to steal $2, 792.28 from the Scottsdale branch of Blockbuster Video.

Sentenced to five years in jail, Vasquez ended up serving three years and 10 months – all of it in the mixed security ASPC Florence, where she worked variously as a landscaper, an education aide and an administrative assistant.

The 44-year-old has not been in trouble since being released in November 2004 and now lives a quiet life in Phoenix with her pack of pit bull dogs, who Stek says ‘are like children to her’.

She added: ‘She’s always been responsible, hates liars. That’s one thing she’s always said – that she despises liars and she’d always get on them for that.’

Although it is unclear exactly when she transitioned, she has been posting pictures of herself in female attire since at least 2007.

Both Stek and her husband say they are concerned Vasquez might receive transphobic abuse in the wake of Sunday night’s fatal accident, with Kirk telling DailyMail.com: ‘For someone to judge her based on the fact she’s a transgender female is utterly reprehensible as far as I’m concerned.

He added: You’re not a human being if you’re going to judge someone on a tragic accident and that [being transgender] has nothing to do with it.’

Friends of Herzberg have called for the technology firm to be closed down following the crash.

Deniel Klapthor, a friend of Herzberg, lashed out at the ride-sharing company, saying they must face harsh penalties over the death.

‘Uber should be shut down for it,’ Klapthor told The Guardian.

‘There has to be a bigger punishment than not allowing them to drive it on the street.’