Yet, CEO Dara Khosrowshahi insists the company is on the right track, and even expressed confidence in its business model.

‘The model is absolutely sustainable,’ Khosrowshahi told CNN on Wednesday.

After UBER lost $5.2 billion last quarter, CEO Dara Khosrowshahi (pictured above) insists the ride share company is still on the right track. He even expressed confidence in it’s business model

Khosrowshahi, who previously headed online travel site Expedia, was brought in to replace Uber co-founder Travis Kalanick, who resigned as CEO in 2017 after facing a rebellion from his board over a string of scandals, including allegations of enabling a chauvinistic and toxic work culture.

Since taking over from Kalanick, Khorsrowshahi has had to still deal with a string of company problems, including the startup’s dismal finances.

Passing them off with a smile, he told CNN that Uber was still on its planned trajectory.

‘The business, for example, is still growing 30-plus percent on a global basis,’ he said.

‘And anytime you have a business that has the kind of market size of trillions of dollars in terms of transportation and food and global commerce, it makes sense for a company to invest,’ he added, making a reference to both Uber’s ride share business and food delivery unit. 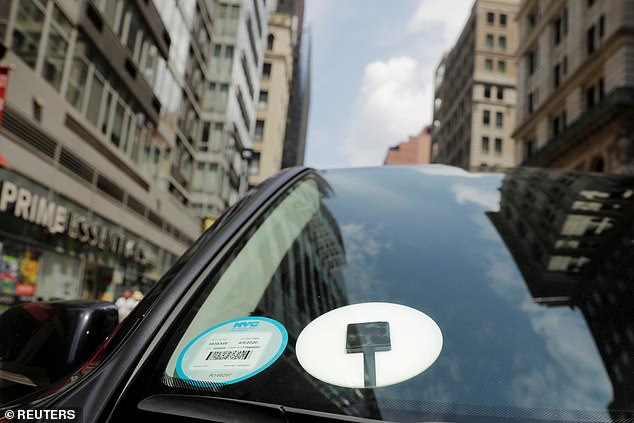 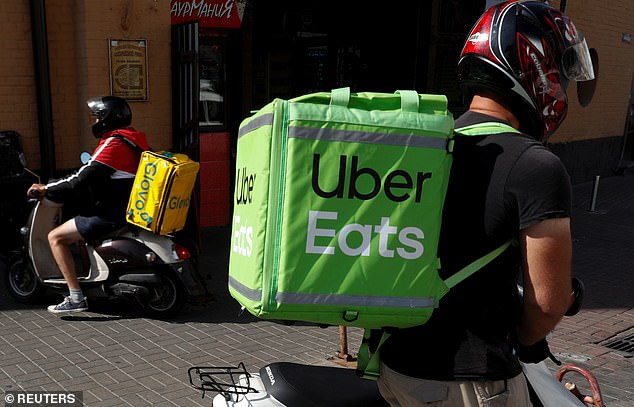 Another one of Uber’s divisions, Uber Eats (pictured above), provides food delivery services. The firm also operates electric bikes and scooters in certain cities. Both have businesses have been cut back

Uber’s loses, by the numbers, include $1.3 billion in stock-based compensation relating to its IPO. Another $1.3 billion in losses were about 50% higher than the year before.

Uber’s stock has dropped about 30% since the company went public in May – even though the firm had raised $8.1 billion for its IPO, one of the largest public offerings ever.

And the road ahead looks difficult.

Pending California legislation, if approved, could lead to an increase in driver costs for Uber and other ride share companies, and likely would set a precedent for other states to create similar laws.

Under such a regulation, Uber would have to prove that its contact drivers are not really full-time employees.

The startup has said it does not believe its drivers will have to be reclassified, and Khosrowshahi agrees.

‘The law, of course applies, but we don’t think that the law, as it relates to us, would classify our drivers as full-time workers,’ he told CNN.

Uber would have to show that its contracted drivers don’t work directly for the firm, that they still do outside work while driving for the startup, and have set up their own independent businesses to provide such services. 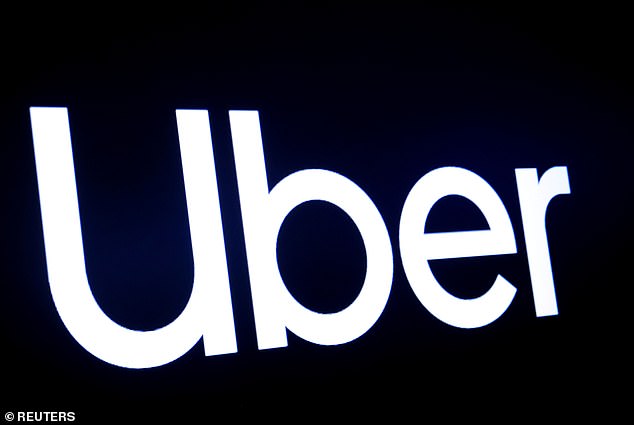 Pending California legislation, if approved, could lead to an increase in driver costs for app-based Uber and other ride share companies, and likely would set a precedent for other states to create similar laws. Uber said it does not believe its drivers will have to be reclassified

Full-time employees would have the expectation of added benefits, including healthcare, and certain rights to minimum wages.

‘We do think that the nature of independent work should change,’ Khosrowshahi said, suggesting contractors do deserve more.

He makes his statements to CNN after a tumultuous period for Uber as an employer trying to control costs. The company laid off 400 workers this summer, about one third of its marketing department, and last month dismissed another 435 from its product and engineering departments.

In London this week, Uber was given just two months to improve or face being shut down as it is ordered to meet new conditions to ‘ensure passenger safety.’

Uber is being kept on a short leash by Transport for London, also known as TfL, after the two-month licence was believed to have been shortest ever issued by the transportation authority.