Uber shares opened three percent down from Friday’s close on the New York Stock Exchange on Monday after the ride-sharing app lost its license to operate in London over passenger safety fears.

The company’s share price dropped from $29.56 at Friday’s close to $28.23 in pre-market trading as the fallout from the London decision spread.

They recovered slightly to open at $28.77 at 9.30am. It shaves $1billion off the company’s valuation. It was worth $50.42billion on Friday before the Transport for London decision. On Monday morning, that figure was $49billion.

At their highest in June this year, shares traded for $47.08.

The London decision is the latest in a string which has rattled shareholders and cast the company’s future into uncertainty.

Dara Khosrowshahi, who took over from Travis Kalanick as CEO in August, tweeted on Monday morning: ‘We understand we’re held to a high bar, as we should be. But this TfL decision is just wrong.

‘Over the last 2 years we have fundamentally changed how we operate in London.

‘We have come very far — and we will keep going, for the millions of drivers and riders who rely on us.’

Experts warned on Monday how the London decision would likely ‘unnerve’ investors.

‘It sends a worrying signal to the market about the regulatory overhang the company faces – if London goes this way there is a risk that other cities could follow.

‘London is one of five cities that combined account for about a quarter of revenues – so it’s a big deal in terms of raw revenues.

‘The problem Uber faces is that there is no shortage of competition to step in, so once gone it could be forgotten pretty quickly,’ Neil Wilson, chief markets analyst at Markets.com, said.

His departure boosted the company’s share price to an all-time high, but challenges came in August when the company reported a $5billion loss from the second quarter of the year.

The decision in London – Uber’s largest European market – has been a longtime coming.

For years, the city’s black cab drivers have petitioned local lawmakers and consumers to try to get Uber cars off its streets, claiming their low prices and slapdash authorization process both undercut their prices and put passengers at risk.

Uber has fought the resistance at every turn.

Monday’s decision by Transport for London, which is in charge of the city’s transport links, does not immediately take Uber cars off the street. The company can continue  to operate for another 21 days and will while it puts together an appeal.

It insists that it has tightened driver security checks to make them stricter than ever.

‘Over the last two months we have audited every driver in London,’ said Uber’s boss in Northern and Eastern Europe Jamie Heywood. 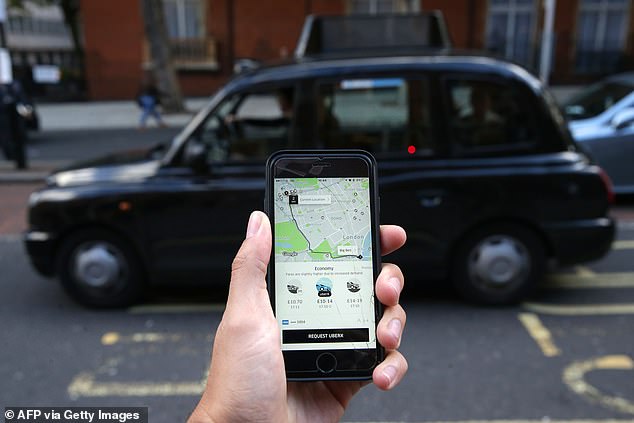 Uber cars will remain on London’s streets for at least another 21 days while the company files an appeal. If the appeal is rejected, they will stop operating there entirely

‘We have robust systems and checks in place to confirm the identity of drivers and will soon be introducing a new facial matching process, which we believe is a first in London taxi and private hire,’ he added.

The biggest concern for lawmakers is that unauthorized drivers were able to upload photos to other Uber driver accounts and allowed them to pick up passengers on at least 14,000 trips.

Transport for London said that as a result, the company was ‘unfit’ for service and the Mayor of London backed the decision.

Their biggest demand over the last few years has been that Uber and other ride-sharing services like Lyft and the now-defunct Juno must adhere to the same rules they are made to follow, like the recent cap on the number of for-hire-vehicles that are allowed in the city at any given time.

The New York Taxi Workers Alliance did not immediately respond to inquiries about Uber losing its license in London on Monday morning.