UEFA confirmed it has moved the match due to coronavirus travel concerns, with the last-16 first leg now to be staged at the Arena Nationala in the Romanian capital.

The UK is implementing strict coronavirus quarantine rules around people returning from Spain, forcing Chelsea’s trip to Atletico to be moved to a neutral venue.

WHY HAS THE TIE BEEN MOVED?

In December, Spain became the latest country to cut travel links to Britain due to the new strain of coronavirus that was spreading in the UK.

Spain is on a ‘red list’ of countries drawn up by the UK Government, which will heavily restrict movement into and out of those nations.

This has forced Chelsea’s match to be moved from Madrid to neutral territory so the game can go ahead.

Chelsea believe the second leg will go ahead at Stamford Bridge as normal.

‘UEFA has confirmed that Chelsea’s Champions League round-of-16 first-leg match away against Atletico Madrid will now be played at the Arena Nationala in Bucharest in Romania,’ read a Chelsea statement.

‘The date of the match, Tuesday February 23, and the kick-off (8pm UK time) will remain the same.

‘The second leg at Stamford Bridge is on Wednesday, March 17 at 8pm.’

Spain is on a ‘red list’ of countries drawn up by the UK Government, which will heavily restrict movement into and out of those nations.

The first legs of Liverpool and Manchester City’s Champions League ties against RB Leipzig and Borussia Monchengladbach have been moved to Budapest given strict travel restrictions imposed in Germany.

The German government has banned most foreign travel into the country due to new Covid variants and sporting fixtures are not deemed as special circumstances.

City’s last-16 tie with the Bundesliga outfit will now take place at the Puskas Arena in Budapest on February 24 after talks between the two clubs. 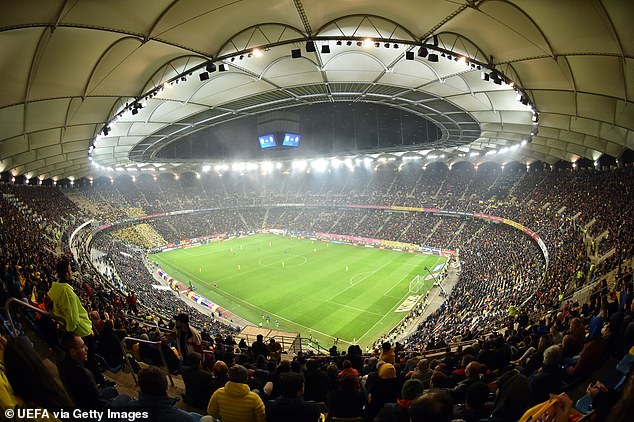 Furthermore, Arsenal and Manchester United have also seen the first legs of their Europa League last-32 matches moved for the same reasons.

The Gunners will take on Benfica in Rome, while United’s meeting with Real Sociedad has been switched from San Sebastian to Juventus’ Allianz Stadium in Turin.

A clash at the Arena Nationala would bring back fond memories for Diego Simeone.

He was head coach when Atletico lifted the Europa League on that very ground in 2012.