Glover Teixeira will be looking to see off the hungry young contender Jiri Prochazka in the main event of UFC 275 this Saturday.

The light-heavyweights top the bill but as ever, there are plenty of other interesting match-ups for fans to sink their teeth into.

Valentina Shevchenko is out to defend her flyweight title against Talia Santos and if Joanna Jedrzejczyk vs Zhang Weili can come anywhere close to their first encounter, those in Singapore Indoor Stadium are in for a treat.

Here, Sportsmail take a look at the best of the rest of the card…

The co-main event of the evening features one of the most impressive and dominant champions in the UFC.

Valentina Shevchenko’s striking is out of this world and has led her to eight wins in succession since falling short against Amanda Nunes.

As sharp as the hands and feet can be, the 34-year-old has rounded off her game to be exceptional everywhere and it would be a mighty shock if Santos could upset the apple cart.

‘The Bullet’ is as comfortable a champion as the UFC has right now and is keen to test herself again by moving up to bantamweight if she gets past Santos.

‘A trilogy with Amanda would be amazing, or a rematch against Julianna would be very interesting. I’m definitely open to either of those opportunities,’ she said. 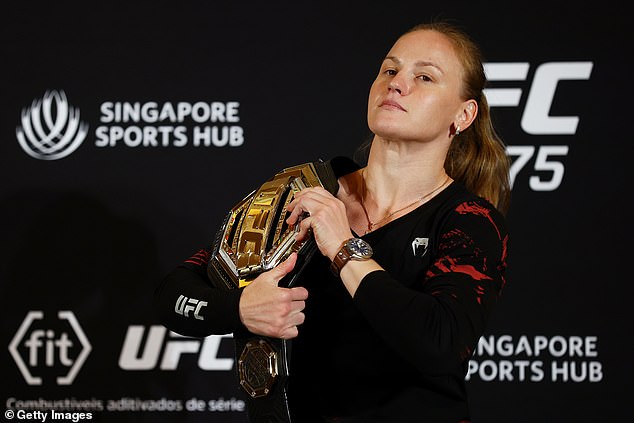 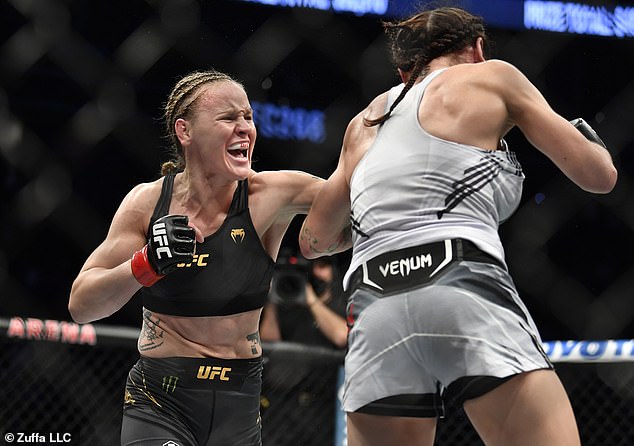 But she will not take Saturday’s opponent lightly, saying: ‘I know how tough she is. Anything can happen, and that’s why I put in so much preparation.

‘I’ve worked very hard with my team. I feel great, I feel strong and I’m ready for the defence.’

Santos is no slouch. She has lost only once in 20 fights and that was by split decision.

Her 205 significant strikes in the UFC is 74 more than those she has absorbed but that ratio will be tested to the limit on Saturday.

Santos could well bring the best out of Shevchenko and that will be well worth a watch. 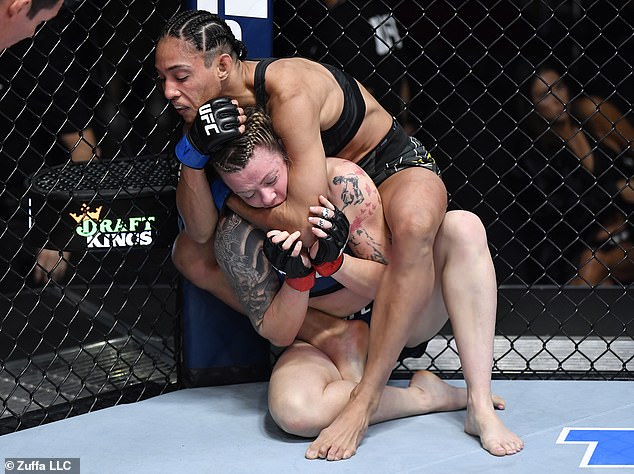 It can’t be as good as last time, can it? The last time these two locked horns was just sensational and earned Fight of the Year honours for 2020.

Many believe it to be the greatest fight in female MMA history.

The stats alone were staggering. Zhang and Jedrzejczyk combined for 351 significant strikes — the third-most ever in a UFC fight (Max Holloway and Brian Ortega combined for 400 to top that list). 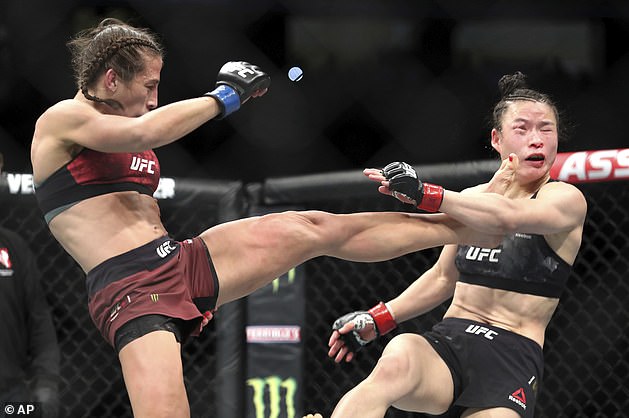 Zhang and Jedrzejczyk notched up 96 head strikes apiece and 58 leg strikes each; Jedrzejczyk rocked the body for 32 strikes compared to Zhang’s 10.

The Polish star has already spoken about the mistake of being drawn into a bloody war with her Chinese opponent.

So expect a more calculated approach this time around. Vintage Jedrzejczyk is squeaky clean and precise with her striking.

She will look to stick and move but there’s a chance the animal in her will take over and engage in a slugfest again.

Regardless, these two strawweights will be operating at 100mph from the first second and even if it fails to live up to the first fight, it should still be a cracker. 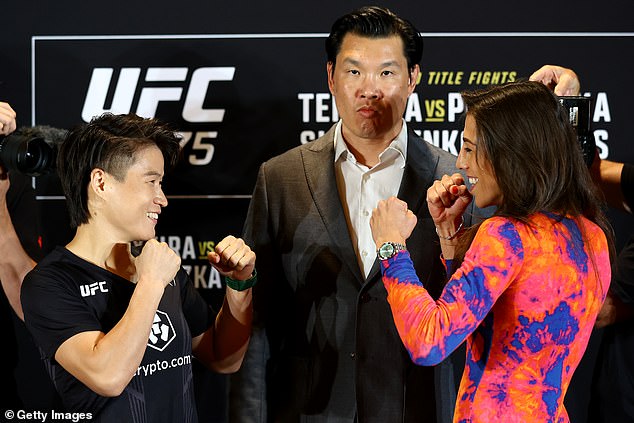 He has won 11 in a row and possesses some beautiful striking. Dana White rarely speaks about upcoming prospects unless he is convinced by their potential.

But the UFC president described Della Maddalena as ‘special’. He looks every inch a fighter with a busted up nose to show for his work so far. 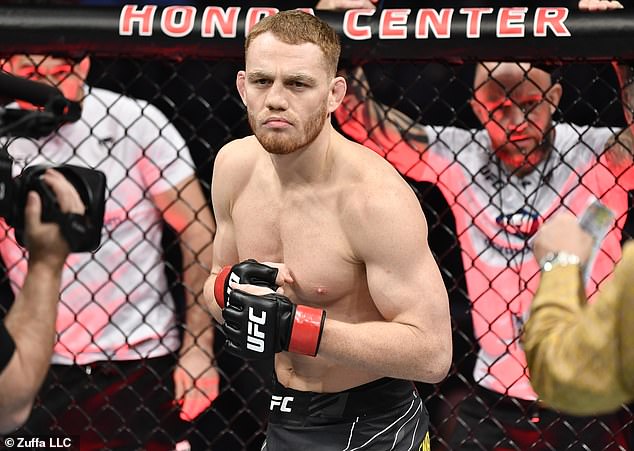 And with a background in boxing, it is on the feet where he is most comfortable.

Emeev is a perfectly timed step up in class for the man from Down Under.

He can kickbox well and time his takedowns nicely so Maddalena will have to be wary of the range he plays with.

Patience will be the key for Maddalena. If he overreaches and finds himself off balance, there will be every chance he ends up on his back.

Victory would see the hype move to another level and plenty of eyes will be on the exciting 25-year-old, who has a real platform to impress. 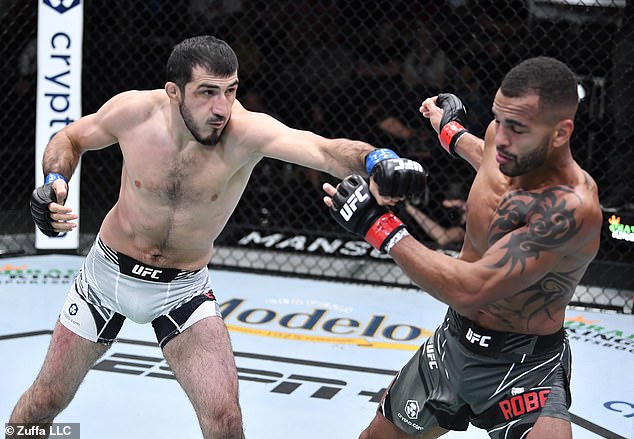 Perhaps there will be another Australian out to steal his countryman’s thunder.

Matthews has a dominant top game and will be looking to put Fialho on the ground as often as he can.

Not much is known about Fialho’s ability to fight from adverse positions when the fight goes horizontal but that’s partly to do with his fight-ending ability on the feet.

The Portuguese banger is staying extremely busy and this will be the third time he’s fought in less than two months. 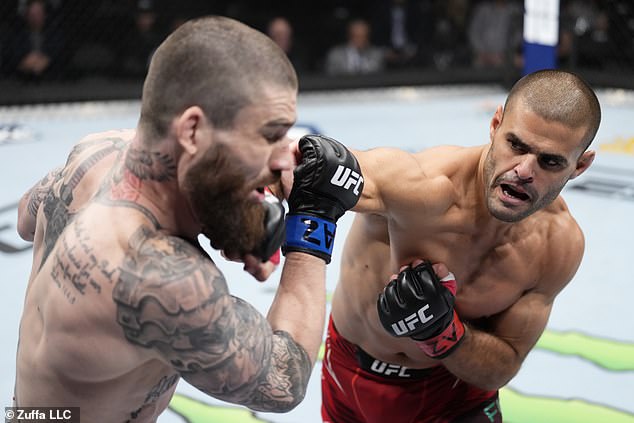 Bonus-winning KOs of Miguel Baeza and Cameron VanCamp came after he was pieced apart in a decision defeat by Michel Pereira.

And if he keeps up that momentum with another stoppage against Matthews would really put him on the radar.

Portugal is hardly a hotbed of MMA talent so Fialho can mark himself out as a pioneer for his homeland.

Bontorin is No 8 at flyweight but has lost his last four and desperately needs a victory to cling on to a slot in the top 10.

Kape is an exciting striker with 11 knockouts on his record and he is backing himself to have too much for the Brazilian. 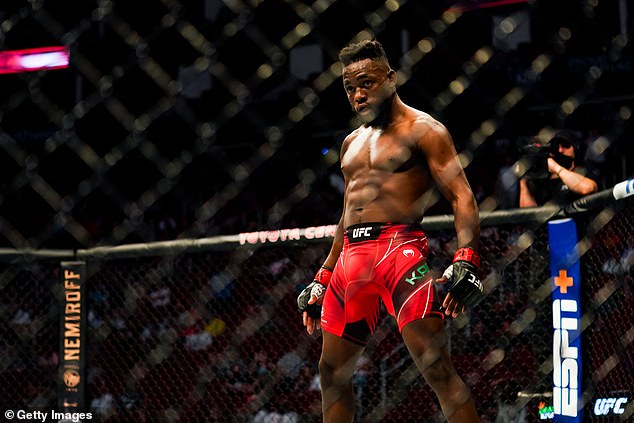 ‘This match-up is very well on my side. You can see the speed that I bring in an octagon.

‘Even with the guys [that are fast], I still beat them because I’m the fastest. I don’t believe that Bontorin can show me something different that I haven’t seen.

Kape generally needs to finish the fight inside the distance to win and will hope to avoid a decision.

This will be a stern test of his credentials against a man who has fallen short against top level opposition in Kai Kara-France, Brandon Royval and Ray Borg. 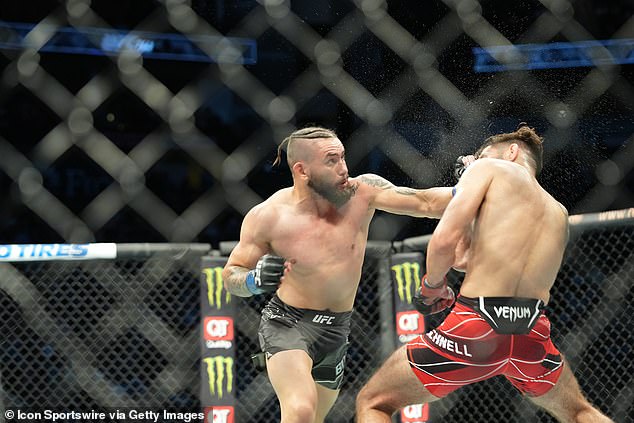