Former UFC champion Ronda Rousey said her decision to walk away from the WWE is because of ‘ungrateful fans’ and a hectic work schedule.

‘What am I doing it for if I’m not being able to spend my time and energy on my family, but instead spending my time and my energy on a bunch of f****** ungrateful fans that don’t even appreciate me?’ she told Steve-O.

Rousey, 33,  whose career in WWE began January 2018, previously said she would take a step back from the ring and any comebacks with pro-wrestling company would be part-time.

Ronda Rousey (pictured), 33, said her decision to step away from WWE involved ‘f****** ungrateful fans’ and the busy schedule

‘My family loves me and they appreciate me and I want all my energy to go into them. So that was my decision at the end of the day.’

‘It’s like, ‘Hey girls, love what you’re doing. I’m gonna try and take all my momentum and push you guys as far as I can. Fly little birds, fly! I’m going f—ing home!’ And that was basically it.’

This is not the first time Rousey has angered some with her comments towards WWE fans. 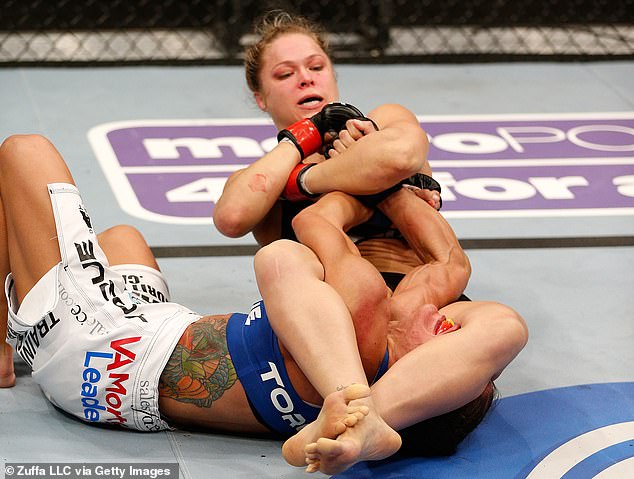 Rousey (pictured): ‘I love performing. I love the girls. I love being out there … but, at the end of the day, I was just like, “F*** these fans, dude’ 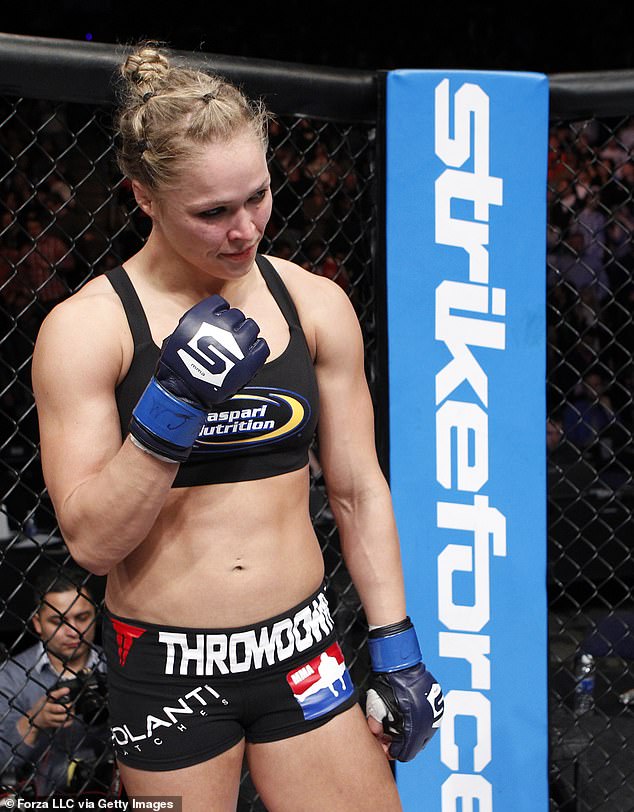 In March 2019, Rousey pushed back at the crowd during Monday Night Raw where she addressed getting booed at Staples Center in her hometown of Los Angeles.

‘I’m not your dancing monkey, not anymore. Damn your fantasies, damn the man, screw the woo and no more Mrs. Nice B***,’ she said.

She later said ‘f*** ’em’ to fans during her a YouTube video when she called wrestling fake.

A busy work schedule, according to Rousey, is another reason she has distanced from WWE.

‘I needed to do it in order to learn and get immersed into it and really understand what’s going on, but it’s just not the lifestyle for me,’ she explained. 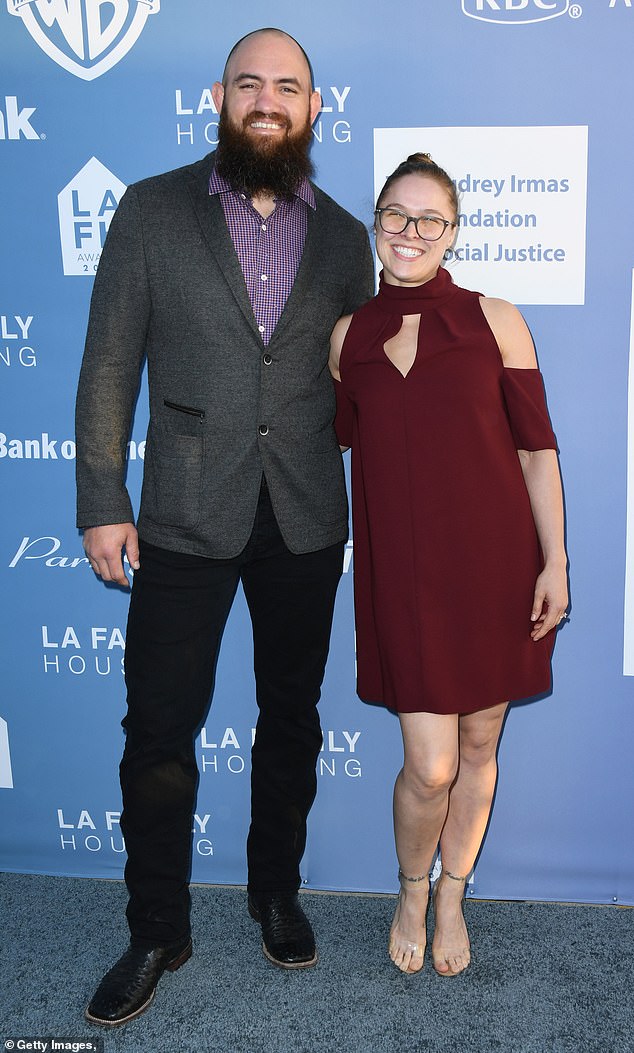 Rousey (right), pictured with husband Travis Browne (left), said that her WWE work schedule is another reason she’s stepped back 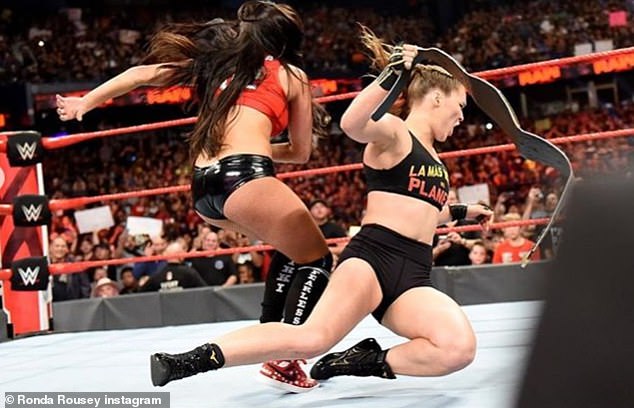 Rousey (right): ‘People think you’re only wrestling as much as they see you on TV, but they don’t realize that there’s three or four other days of live shows during the week’

‘Running out there and having fake fights for fun is just the best thing. … But I was doing basically part-time and I was away from home 200 days out of the year. And when I did get home, I was so sleep-deprived cause you just don’t have time to lay down.

‘People think you’re only wrestling as much as they see you on TV, but they don’t realize that there’s three or four other days of live shows during the week.’

She added that she was home only ‘a day and a half a week’ during the height of her WWE career.

Rousey’s focus on family comes after she revealed on Instagram last April that she and her husband, Travis Browne, wanted to have children.

On Twitter, Rousey responded to angered WWE fans over her ‘fake fights for fun’ comment after the podcast was released. 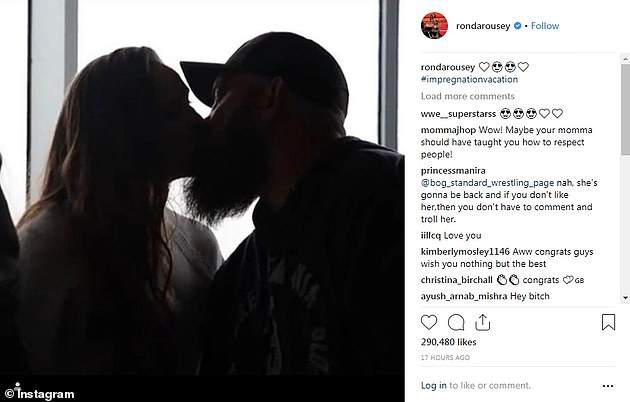 Ronda Rousey posted the message on Instagram yesterday, with a picture of her kissing her 36-year-old husband Travis Browne 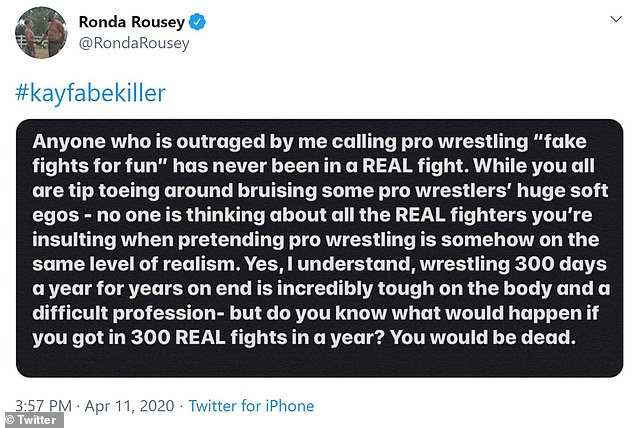 ‘While you all are tip toeing around bruising some pro wrestlers’ huge soft egos – no on is thinking about all the REAL fighters you’re insulting when pretending pro wrestling is somehow on the same level of realism,’ she wrote.

Rousey’s contract with WWE is set until April 2021.

Before her stint in WWE, Rousey was a UFC’s first woman champion and settled at a 12-2-0 record while with the promotion company.

She’s also won a bronze medal in judo during the 2008 Beijing Olympics.