A mysterious ball of light hurtling across the night sky has baffled experts, with some speculating it could be a meteorite and others claiming it’s an unidentified flying object.

Jordan McNiven and his housemate were driving along Top End road in Rosebery, Northern Territory, when they saw a flash of light making a beeline for the ground around 10pm on Saturday.

In a blink of an eye the eerie object vanishes without a trace.

‘As I was with my housemate, he thought of a shooting star and I thought it could have been an osprey (a type of military plane),’ Mr McNiven told NT News.

‘Only thing that I can think of is either space junk being burnt up in our atmosphere or a meteorite burning up on entry.

‘This is the first time I’ve ever seen anything like this.’

Luckily Mr McNiven was able to react quick enough to save his dashcam footage.

He shared the video to Facebook on Sunday asking: ‘Anyone got a theory on what was in the sky just as I get to the intersection?’

Several commenters wrote that the bright light was likely a meteorite or shooting star, others weren’t so convinced.

‘Meteorite/Shooting star mate. Decent size one. Pretty common to see them like that but happens so quick nobody really notices. Got to be there at the right moment,’ one person wrote.

‘I’ve had them (shooting stars) so bright they’ve left ‘burn scars’ in the sky, where you can still see its trail seconds later even after looking away,’ a commenter replied. 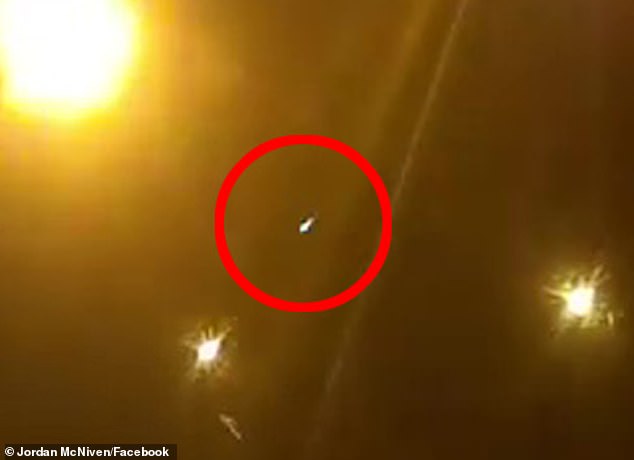 ‘Post it to the Australian Meteor Reports page. Lyrid meteor shower is about at the moment,’ another said.

Other commenters had different theories.

‘Ahhhh here we go, that right there is a UFO and aliens are gonna kill us all,’ one person wrote.

‘Pretty sure it was an election promise from Scomo or Albo. Can’t be sure though,’ another joked.