A Ugandan imam has been suspended after discovering his new wife was actually a man.

Sheikh Mohammed Mutumba, 27, found out the truth when his bride was caught stealing a TV from a neighbour and was searched by police.

The thief later admitted pretending to be a woman so he could marry the imam and steal his money, local media in Kayunga reported.

Shocked Mutumba has been suspended from his duties as a cleric at the Kyampisi Masjid Noor mosque while an investigation is carried out.

Sheikh Mohammed Mutumba, 27, says he had no idea his bride was a man when they married

He claimed he hadn’t been intimate with his ‘wife’ since the wedding two weeks before because she told him she was menstruating.

Mutumba said he thought he was marrying a woman called Swabullah Nabukeera when they wed in a traditional Islamic ceremony in December.

Her true identity was exposed when she was arrested for the theft of a television set and clothes from his next door neighbors.

A female police officer carried out a body search on the suspect, thinking she was a woman, and found out she was actually a man. 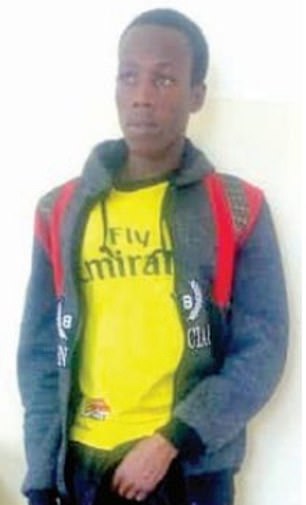 Mutumba is said to be ‘too devastated’ to talk about the incident and needs counselling.

Friends and colleagues said they were also fooled by the imposter, who usually wore a hijab.

Amisi Kibunga, who also works at the mosque, said: ‘He had a sweet soft voice and walked like a woman.’

Kibunga also revealed that Mutumba had complained four days after the wedding that his new bride refused ‘to undress while they slept.’

The suspect later told police his real name was Richard Tumushabe and he admitted he married Mutumba in a bid to steal the cleric’s money.

Mosque officials said they suspended the imam despite confirming he had entered the marriage thinking Nabukeera was a woman.

The mosque’s head imam, Sheikh Isa Busuulwa, said the suspension was necessary to ‘preserve the integrity of their faith.’

He said Mutumba had worked at the mosque for four years and was one of its three imams.

The head cleric added that though he had attended Mutumba’s marriage reception, the mosque had not been involved in the wedding celebrations.

Local news reporters from The Daily Monitor tried to contact Mutumba at his home but neighbors said he had not been seen for days and was staying with relatives while receiving counseling.