The amount spent on aid rises every year because the Government is committed by law to spending 0.7 per cent of national income on it. If the economy grows the share also rises.

Aid spending is deeply controversial among Tory MPs who insist more money should be spent at home on public services or on defence.

Pakistan received the most direct cash from the UK, receiving more than £400million in development assistance. Nigeria was second on £327million.

Almost £530million was also ploughed into multi-national efforts to respond to humanitarian crises caused by wars in Somalia, Syria and Yemen.

UK aid spending topped £14billion (red line) for the first time in 2017, official figures on taxpayer cash spent in other countries reveals today. The Government now spends 0.7% of national income on aid since a law change in 2013 (blue line) 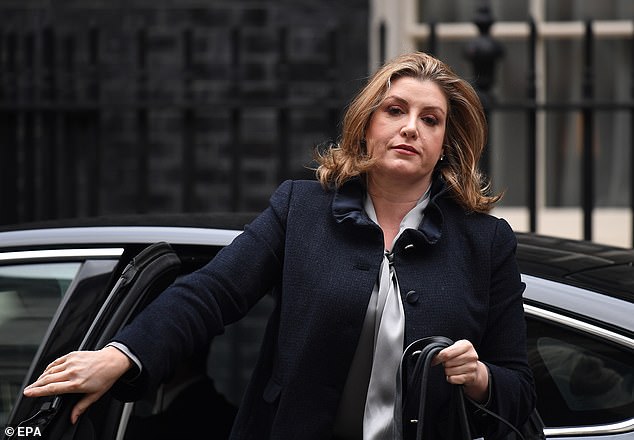 A Government spokesman said: ‘The UK was at the forefront of delivering lifesaving aid in humanitarian emergencies around the world in 2017, from wars in Yemen and Syria, to the Rohingya crisis in Bangladesh, to famine in South Sudan.

‘We are spending UK aid where it is most needed, saving lives and helping poorer countries prosper.

‘Poverty reduction is at the heart of what we do but UK aid is also tackling global challenges like disease, terrorism and conflict, and creating a safer, healthier and more prosperous world for us all.

He told MailOnline: ‘This extravagant approach to overseas aid does not fit comfortably with the continued austerity at home.’

Almost three quarters of UK aid is spent via the Department for International Development – but the figure is falling as other departments spend abroad.

Money spent by the Foreign Office and Ministry of Defence now makes up a bigger share as the Government focuses on work aimed at boosting the UK interest directly.

About 63 per cent of aid spending is ploughed directly into other countries by the UK, with the remaining 37 per cent spent via multinational aid agencies. 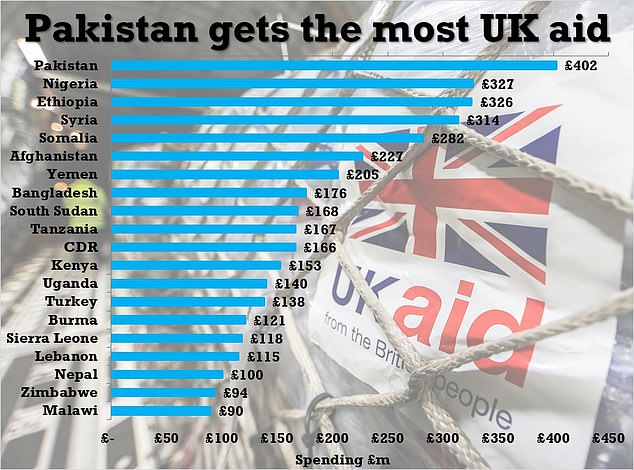 Pakistan received the most direct cash from the UK, receiving more than £400million in development assistance. Nigeria was second on £327million

Over the past 12 months projects have included the first ever cholera vaccination campaign in Yemen.

The UK’s Emergency Medical Team – which can rapidly set up a field hospital overseas in response to a disaster or emergency – was deployed to help curb the outbreak of diphtheria amongst Rohingya people in Cox’s Bazaar, Bangladesh.

Aid spending was also used to respond to new Ebola outbreaks in the Democratic Republic of Congo, supplying vaccines and personnel to treat patients.

Aid to the poorest countries in the world increased by £234million as the target of spending is redirected from middle income nations.