England, Scotland and Wales have recorded 887 more coronavirus deaths today, taking Britain’s total to 7,984 as its coronavirus crisis rumbles on.

The rise is considerably smaller than the devastating 938 announced yesterday but still represents the second biggest surge since the epidemic began.

NHS England announced 765 more fatalities in its hospitals among patients aged between 24 and 103, taking England’s total to 7,248.

The Scottish Government announced this afternoon that 81 more people had died there, taking the national total to 447, and Wales confirmed a further 41 fatalities, increasing its own number of victims to 286.

A full update from the Department of Health, including the number of new positive tests, is expected this afternoon.

Experts say it is still too soon to see the impact of the UK’s lockdown in daily statistics – deaths announced today mostly took place days or weeks ago.

Scotland’s First Minister Nicola Sturgeon spoke out about the UK’s lockdown today and said there is ‘no possibility’ that it will end any time soon.

The Government was expected to review its social distancing timescale on Monday but this has been delayed on account of Prime Minister Boris Johnson’s illness.

Mr Johnson remains in intensive care at St Thomas’ Hospital in central London. He is said to have had a ‘good night’ and to be ‘continuing to improve’ on his fourth day.

Mr Johnson was admitted to hospital on Sunday after his fever carried on for more than 10 days and has since been given oxygen therapy to help him breathe.

His spokesman said today: ‘The PM had a good night and continues to improve in intensive care at St Thomas’s. He is in good spirits.’ 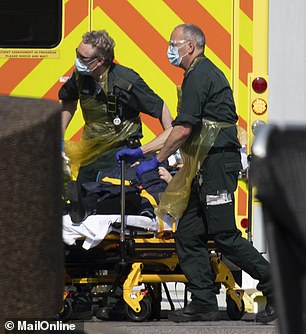 Foreign Secretary Dominic Raab is now de facto leader of the Government and is standing in as deputy while Mr Johnson recovers from his illness.

Mr Raab will keep Government running, potentially for weeks, but there are concerns about a power vacuum at a moment when the country needs strong leadership.

The PM had been expected to lead a discussion next week about the progress of the UK’s lockdown and considerations of when it might end, but it looks as if he will now be unable to.

Downing Street said the three-week review, which is now required by law, would go ahead with or without Mr Johnson.

The consensus is that Britain is still a long way off the level of security it needs to be able to start easing social distancing and the closure of public places.

Scottish First Minister Nicola Sturgeon said on Sky News today: ‘I don’t think there is any possibility, any likelihood of these lockdown measures being lifted immediately, or even imminently.’

She added: ‘I wouldn’t expect any change coming out of today’s Cobra meeting but we will see where the discussions take us.’

Downing Street did not contradict Ms Sturgeon, and a spokesman said: ‘What we absolutely need to do now is to keep baring down on the rate of transmission which means continuing with social distancing measures and making sure we are protecting the NHS and saving lives.

‘As we have said before we are at a critical point, that is certainly the case as we approach the Easter weekend.’

This mirrors the comments of leading government scientists. Chief scientific adviser to the Cabinet, Sir Patrick Vallance, said this week that it would be another seven days or more before the effects of the lockdown became clear.

Speaking ahead of a virtual question-and-answer session with party leaders, Ms Sturgeon today said 4,957 people in Scotland have now tested positive for the virus, up by 392 from 4,565 the day before.

Ms Sturgeon added that 1,781 people are in hospital with confirmed or suspected COVID-19.

It has been 100 days since the first confirmed case of coronavirus in Wuhan in China, the First Minister said, adding the lives of the people of Scotland since then have been ‘transformed in ways that would have been unimaginable just a few weeks ago’.

Addressing the Easter weekend, she urged people to continue to follow lockdown protocols.

She said: ‘I know how hard it is for people to do that, it will seem even harder over this Easter holiday weekend, especially for families with children and indeed for the children themselves and for older people who would normally be spending time with their grandchildren.

‘Please stay in touch with family, friends and loved ones in whatever alternative way best works for you.

‘Reach out to and look out for people even as you stay physically apart from them, but please do follow the rules and stay at home over Easter.’

Meanwhile, just 16 new cases have been diagnosed in Wales – to a total of 4,089 – because of a temporary change in the way the country records patients.

Dr Robin Howe, a director at Public Health Wales, said the number was lower than usual as a result, adding: ‘Today’s figures reflect a much shorter period of six hours of testing. Case numbers will return to normal on Friday, as we return to 24 hour reporting.’