Covid vaccines were today approved for babies in Britain, in a move likely to spark huge controversy.

Regulators gave the green light for all infants older than six months to get a special, low-dose formulation of Pfizer’s jab.

Its decision opens the door for No10’s vaccine advisers to choose whether under-5s should be jabbed as part of the UK’s vaccination strategy.

Authorities have so far held out on recommending jabs for infants due to concerns that the benefits don’t outweigh any potential risks. Children rarely get seriously ill with the coronavirus, and the majority are thought to have already been infected.

EU health chiefs today approved Covid vaccines for babies, in a move likely to spark controversy. The Bloc’s drug watchdog gave the green light for children older than six-months to get either Pfizer or Moderna’s jab 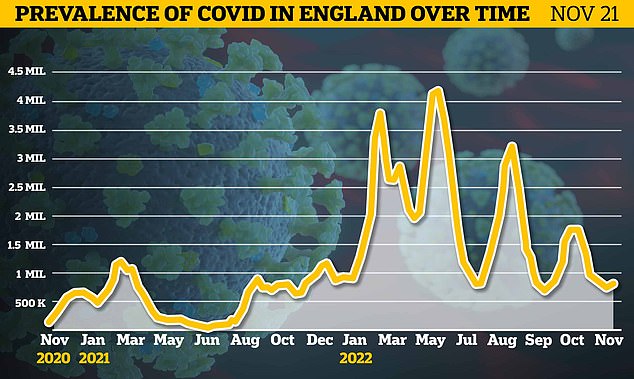 Data from the Office for National Statistics (ONS) suggests Covid infections shot up 7.9 per cent in the week to November 21 after four weeks of falling. Its surveillance data, based on the random swabbing of thousands of people, shows 873,200 people were carrying the virus, up from 809,200 one week earlier 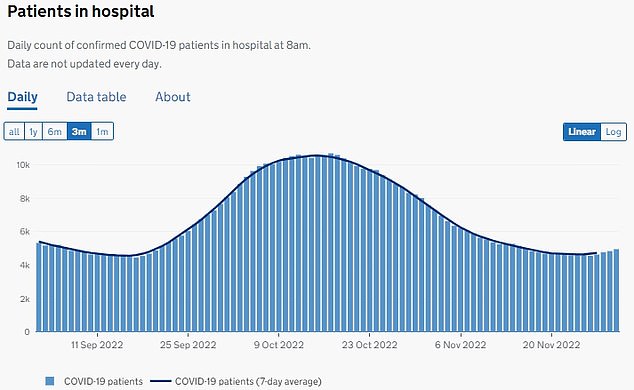 Meanwhile, 4,964 people testing positive were in hospital beds of November 30, up eight per cent on the previous week

The MHRA made the decision after reviewing data from an ongoing clinical trial, which saw 4,526 infants given a small 3microgram dose of the vaccine.

For comparison, adults in Britain get a dose 10 times stronger. Older children, who are allowed to be vaccinated in the UK, get given a dose of up to 10micrograms.

Lower doses are given to children to avoid complications, such as myocarditis — the rare condition that spooked health chiefs early on in the pandemic.

The jab is given as three injections in the upper arm, with the first two doses given three weeks apart.

A third dose is administered at least two months after the second.

The MHRA said the jab triggered common side effects ‘in-keeping with what can be anticipated from a vaccine in this age group’.

The Commission on Human Medicines — a committee within the MHRA — endorsed approving the vaccine, after reviewing the evidence.

Scores of countries, including the US, China and Israel, already offer vaccines to kids under five, despite huge backlash over the moves.

US officials rolled out this version of Pfizer’s shot for the same age group earlier this year.

And EU regulators also endorsed the use of Covid vaccines made by Pfizer and Moderna for under-fives.

Despite fears of winter chaos, infection rates are already beginning to slow down in EU nations.

Outbreaks appear to have stalled in Germany, France and Italy, but data is much less accurate because fewer tests are being carried out.

Cases are on the rise in Britain, latest data shows.

Everything you need to know about Covid vaccines for children

Which children can get the vaccine?

All children aged 5 and over can get a 1st and 2nd dose of a Covid vaccine.

They are given either jabs by Pfizer or Moderna.

Over-5s with a severely weakened immune system can get a third dose.

High-risk children can also get booster jabs, if needed.

But vaccines have yet to be approved for under-5s.

Do children get ill with Covid?

Most children only experience mild symptoms after being infected with Covid.

Just one in 300,000 children who test positive for Covid die, according to UK Government data.

And the risk of being hospitalised and getting admitted to ICU is similarly low.

But the risk is higher to children with serious underlying conditions.

Doesn’t the vaccine have complications?

One of the main fears is that the vaccines have been linked to cases of myocarditis, inflammation of the heart muscle.

But experts insist the majority of cases are mild, and that rates in Britain are lower than in Israel and the US, where concerns were first sparked.

The virus itself can also cause the condition.

Covid vaccines approved for use in the UK have met strict standards of safety, quality and effectiveness.