Dressing down: Primark fears a £375m hit from the lockdown

Businesses are already counting the cost of another lockdown as ministers struggle to quash fears that restrictions will be extended.

Retailers and hospitality firms were left reeling with bosses warning that sales in the crucial Christmas trading period would be hammered, putting thousands of jobs at risk.

Primark, which has no online presence, said a month of closures across England would cost the business £375million in sales and more than half of its shops will now be shut across Europe.

The British Retail Consortium has already labelled the lockdown a ‘nightmare before Christmas’.

Easyjet told customers it would likely ground all flights during the four-week lockdown period, which is due to run from Thursday this week to December 2 but could be extended.

Ryanair accused governments across Europe of ‘mismanaging’ air travel as it reported losses of £178million for the six months to September and warned of even deeper losses over the next six months.

Ladbrokes and Coral owner GVC said the closure of its 3,000 bookmakers in the UK, and some of its European stores, would hit profits by £43million.

Businesses have demanded an exit plan after Cabinet Office Minister Michael Gove said the new lockdown in England could be extended beyond four weeks if infections do not fall far enough.

Critics railed against the Government’s heavy-handed restrictions saying industry was ‘bearing the brunt of the Government’s incompetence’ in failing to build an effective test and trace system. 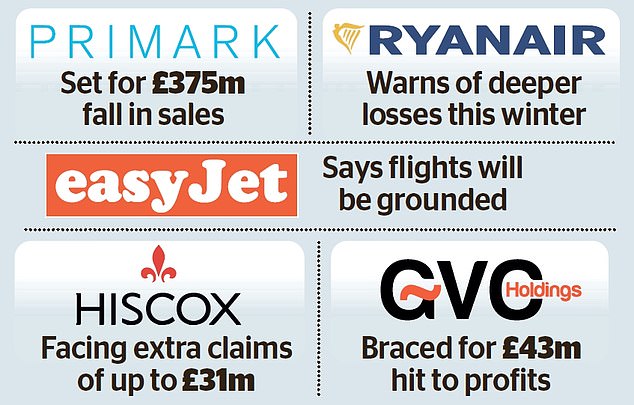 Chancellor Rishi Sunak was forced to reassure business that it was his ‘firm hope and expectation’ that lockdown would end on December 2.

But analysts at Peel Hunt said: ‘It would be sensible to assume that an extension is likely.’

Jonathan Neame, chief executive of pub group Shepherd Neame, said: ‘We’re sacrificing our freedoms and our economy and seeing enormous carnage created across the country because of a failure of public health.

If Christmas is lost as a trading period, I fear that there will be a substantial number of more redundancies.’

Ten forecasters and banks predicted Britain would now suffer a double dip recession with Berenberg and EY Item Club predicting falls in GDP of 5 per cent or more between October and December.