UK car production levels RISE for the first time in 11 months: Outputs in May increased by 13% but are still way behind pre-pandemic volumes

Car production levels across Britain grew for the first time in 11 months last month, fresh data from the Society of Motor Manufacturers and Traders (SMMT) has revealed.

Production rates increased by 13.3 per cent in May, representing the first shoots of growth after 10 consecutive months of decline.

There was also good news in terms of green vehicle outputs, with battery electric car production levels more than doubled, rising 108.3 per cent, with 4,525 built.

However, the trade body warned the new figures gloss over the huge drop off in local motor manufacturing when compared to data from before the pandemic, with semiconductor and component shortages still hampering the sector.

On the up: Car production levels across Britain grew for the first time in 11 months in May

But, the SMMT warned that May’s figures had to be viewed in context against data seen in May 2021, which was still ‘suffering significantly from pandemic related headwinds’.

It added: ‘Output remains 46.3 per cent below the pre-pandemic month in 2019, with ongoing supply chain issues, increasing economic uncertainty, rising business costs and disruption caused by the war in Ukraine.’

In the year to date, total output has fallen by 23.2 per cent, with supply chain constraints – namely the shortage of semi-conductors – limiting volumes, with just 330,185 units built. This represents a shortfall of around 99,641.

The decline has largely been driven by a 26.9 per cent fall in exports and a further 4.5 per cent dip in production for the domestic market, the SMMT said.

But, production for both overseas and domestic markets increased in May, by 8.9 per cent and 39.5 per cent respectively. 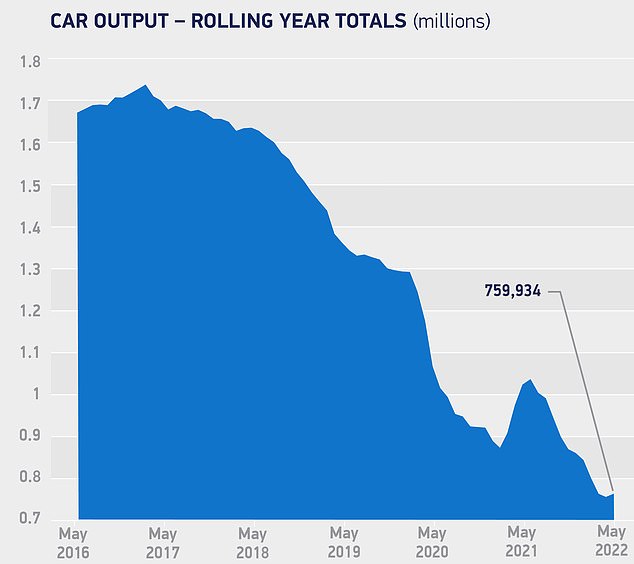 Challenges: UK exports of cars remain below levels seen a few years ago, the SMMT said

Exports accounted for 82.1 per cent of all new cars built in Britain in May, with almost six in ten of these destined for the EU.

Shipments to the US slumped by 35.4 per cent, with the closure of a major UK plant last year continuing to hit export levels across the Atlantic.

Battery electric vehicle production levels surged by 108.3 per cent in May, while 22.6 per cent of all cars built was alternatively fuelled, up from 19.3 per cent last at the same point a year ago, the SMMT said.

‘With the industry racing to decarbonise, we need to safeguard manufacturing competitiveness, drive investment and develop the skill base.

‘Government and industry have a role to play in this transformation and collaboration will be essential if the UK is to remain at the forefront of automotive innovation.’

The SMMT has called for urgent action to mitigate a £90million rise in energy costs and protect UK firms’ competitiveness as it shifts to a zero emission future.

The group said UK car manufacturers are paying around 59 per cent more a year for their energy bills than rivals across the European Union.

The industry body said UK firms could have saved nearly £50million annually if they were buying energy in the EU even before this year’s spike in prices.