UK councils are sitting on HALF of £12bn government grants

Councils handed £12billion last week to distribute to local firms are still siting on half of it, it has been revealed today.

The government distributed some £12.3 billion to local authorities in England as part of its coronavirus business support package.

The grant payments are to be distributed to some of the hardest-hit businesses but the latest figures show only about a third of companies have actually received the money.

Birmingham City Council, one of the biggest in the country, has paid out to barely one in 10 small businesses while Arun District Council has more than £25,000 left to distribute.

The Small Business Grants Fund is a £10,000 grant per eligible business, originally announced at the Budget. Chancellor Rishi Sunak last week agreed to a new fund to support struggling mid-sized businesses in the UK

The Small Business Grants Fund is a £10,000 grant per eligible business, originally announced at the Budget.

Businesses included in this scheme are those which on 11 March were eligible for relief under the Small Business Rate Relief Scheme (including those with a rateable value between £12,000 and £15,000 which receive tapered relief) or the Rural Rate Relief Scheme.

The Retail, Hospitality and Leisure Business Grants Fund was announced by the Chancellor on 17 March. Businesses in scope will be those that were eligible on 11 March for a discount under the Expanded Retail Discount scheme and with a rateable value of less than £51,000.

Grants will be provided in respect of each property (hereditament); therefore, businesses with multiple outlets would receive more than one grant and may receive grants from separate local authorities.

Businesses with multiple outlets can receive more than one grant and may receive grants from separate local authorities, if their different outlets are in different local authority areas. Only one grant can be paid per business premise.

Local authorities are contacting eligible businesses. Businesses who have been contacted are told to ‘respond quickly’ while any businesses who believe they are eligible check the arrangements in their area on their local authority website if they have yet to be contacted.

The Small Business Grants Fund is a £10,000 grant per eligible business, originally announced at the Budget.

With the UK’s state of lockdown now extended for at least a further three weeks, businesses are scrambling to ensure they can remain solvent until the economy can return to normal.

Wolverhampton Council has paid 1,857 businesses a slice of the Government grants, with a further 736 currently being processed.

There are an estimated 5,717 businesses in the borough eligible for a grant, though all businesses may not have applied.

The council said it has been working, ‘every day of the week, including evenings and bank holidays, to process the payments and will continue to do so until every business eligible for a grant has received their payment.’

Jenny Pawsey who sub-lets an office in Oxford, said: ‘The grant of £10,000 would enable us to get back on our feet when the world is starting up again.

‘Our business is a very viable one, and we’ve been going since 1964, but like everyone our cash flow is suffering’.

Adam Marshall, director general at the British Chamber of Commerce (BCC), said the situation for so many firms was ‘extremely difficult’.

He was asked about the consequences of support not coming through fast enough, and told Sky News’s Sophy Ridge On Sunday: ‘Well, the cost here is in terms of people’s livelihoods.

‘We’ve really got to see the banks and the Government working together to speed up the process so that as many businesses as possible can get access to those loans.

‘And the same holds true for local councils as well. They’ve got £12 billion in grant payments to distribute to some of the hardest-hit businesses out there, but from the latest figures that we’ve seen only about a third of companies have actually received the money, so all efforts right now really have to be focused on getting cash to the front line, because there are so many businesses that are counting the time they’ve got left in hours and days.

‘They don’t have weeks or months to wait for those Government support schemes to begin working.’

This comes as a petition against the government’s small business rate relief grant scheme hits 11,900 signatures, as desperate small or medium-sized enterprises in shared offices miss £1bn worth of support. 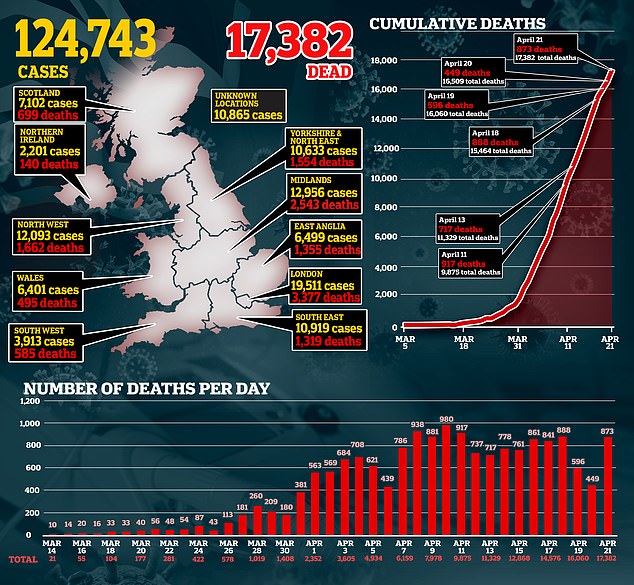 Jonathan Ratcliffe from Offices.co.uk said: ‘Put simply, if you don’t have a business rates account for your business with your local authority you get nothing. It’s a very unfair situation.

‘Small businesses across the UK are absolutely fuming; and at no fault of their own, because their choice of office type dictated whether they got a £10,000 cash grant or not.

‘We’ve estimated that the support missed is over £1bn and it’s all small businesses who are the big employers of the future and they need helping.

‘If we can push this to 100,000 signatures, it will be discussed in Parliament. I just hope this happens soon as many small businesses are being pushed to the wall this month’.’

Lockdown will cost a QUARTER of UK jobs as 6.5 MILLION positions are to be axed with the hospitality industry set to be crippled by coronavirus crisis, research says

Britain’s coronavirus lockdown will take more than 6.5million jobs out of the economy, according to estimates contained in a new study.

Research by the Institute for Social and Economic Research at the University of Essex says this equates to around a quarter of the UK’s total jobs, with more than half the positions in certain sectors to be lost.

It comes as the Government was warned support for businesses during the coronavirus pandemic must come faster if people’s livelihoods are to be saved.

Accommodation and food services are predicted to suffer the worst rate of cuts, with 75.1 per cent of jobs lost, or around 1.3million positions.

Ranked second was ‘other services’ at 50.2 per cent, ahead of ‘wholesale, retail and repair of motor vehicles’ at 47.6 per cent – or roughly two million jobs.

Next came transport and storage on 44 per cent, or some 700,000 positions, before a gap to ‘administrative and support services’, at 26.5 per cent.

The study shows the knock-on effects of certain industries on other sectors, with the agriculture, forestry and fishing sector tipped to lose one job in 10 due to reduced demand from the accommodation and food sector.

Among sectors losing jobs, those faring best in the study were public administration/defence/social security (1.5 per cent), real estate (1.6 per cent), and mining, energy and water supply (2.7 per cent).

Certain sectors showed an increase in their workforces, chiefly health and social work, with a 27.1 per cent rise, and ‘professional, scientific and technical activities’ (up 3.4 per cent).

The institute’s modelling reflects the capacity of some people to work from home, which leaves some sectors less affected than others.