UK deaths in January are 5,000 LOWER than expected despite Covid deaths

The death rate in January fell below the five-year average despite thousands of Covid deaths, according to official figures.

Nearly 5,000 fewer people died in the UK last month than would be expected in the first month of the year despite virus deaths.

The Office for National Statistics (ONS) found that the five-year average for deaths in England and Wales in the first four weeks of the year is 55,130, but this year 50,740 deaths were registered in that period.

For the country as a whole, there were 4,894 fewer deaths recorded than the average for 2016 to 2021. The ONS removed 2020 from its five-year average because it was such an outlier.

If 2021 is also removed from the five-year average there are still declines, with 1,310 fewer deaths between January 7 and January 28.

The figures for the week ending January 28 also show that the number of deaths where Covid is the primary cause has been falling in recent weeks, from 77.4 per cent of registered virus deaths in the week ending January 14 to 72.9 per cent the following week down to 71.2 per cent the week after. This also means that hundreds of people included in the official weekly ONS Covid figures died primarily from other causes.

Paul Hunter, a professor in medicine at the University of East Anglia, told The Telegraph: ‘We now have ONS-reported deaths data for the first four weeks of 2022, and there are some interesting observations.

‘Firstly, total deaths from all causes are lower than the average for 2015 to 2019, so we are not seeing more deaths so far this year than we would expect for this month in the years before Covid.

The graph shows that proportion of Covid fatalities in England where the virus was not the underlying cause of death. Data from the Office for National Statistics shows this figure rose to 28.8 per cent on January 28 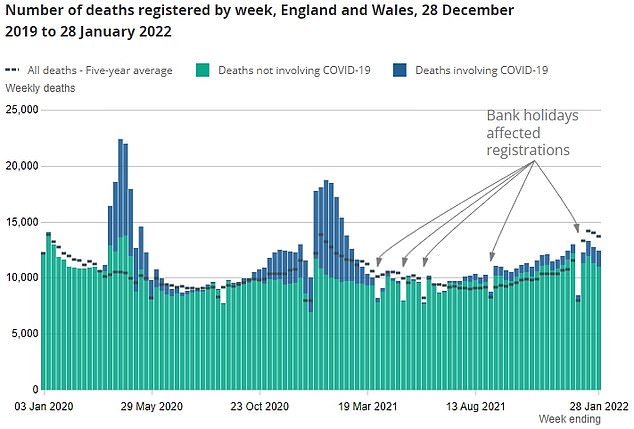 Data from the Office for National Statistics shows the total number of deaths recorded in England over the last two years, with deaths not involving Covid shown in green, while Covid deaths are in blue.  The ONS found nearly 5,000 fewer people died in the UK last month than would be expected in the first month of the year despite virus deaths 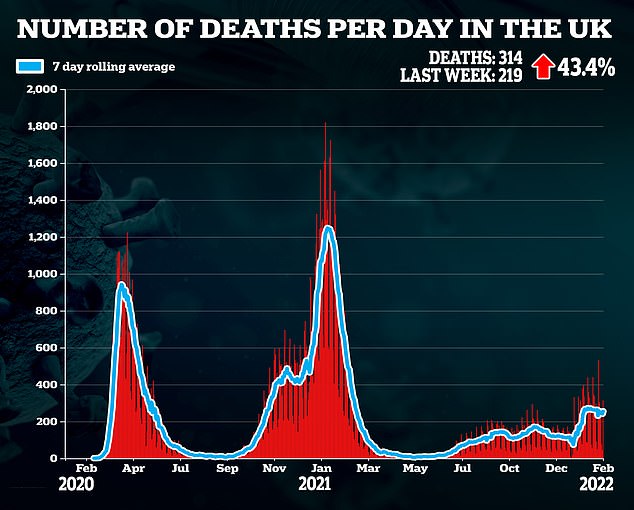 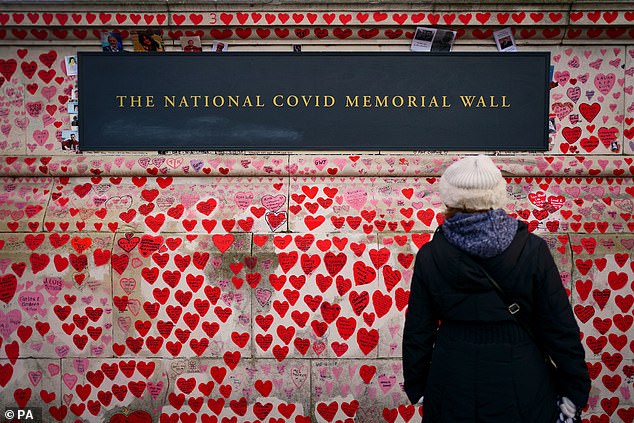 Nearly 5,000 fewer people died in the UK last month than would be expected in the first month of the year despite virus deaths

France has revealed plans to drop its requirement for vaccinated travellers from Britain and America to show proof of a negative Covid test on arrival.

Speaking on Tuesday, Minister for European affairs Clement Beaune did not specify an exact date that the new rules will come into force, but said they would announce the change in the ‘coming days’.

Under current rules, anyone travelling to France from outside the EU, including Britain, has to show a negative Covid test result from the previous 48 hours, regardless of vaccination status.

Beaune said the country is preparing to drop tests for vaccinated travellers outside the European Union, which were reintroduced in response to Omicron, as infection numbers continue to fall.

He told France 2 television: ‘We again required tests in December over the Omicron variant.

‘In the coming days we will announce that tests are no longer needed for vaccinated people.’

‘And, in an increasing proportion of deaths within 28 days of a positive Covid test, the certifying doctor has not considered Covid to have contributed to the cause of death. These figures are based on date reported, not date of death, so will be less biased by time to report delays that can affect recent data based on date of death.’

Dr Raghib Ali, a senior clinical research associate at the University of Cambridge’s MRC epidemiology unit, said that it was ‘now clear’ that deaths had peaked at about 200 a day — about one third of even the best case scenarios put forward by modellers.

‘Doomsday’ modelling released before Christmas suggested that virus deaths would only be kept to such a low peak if restrictions were imposed.

Government dashboard data shows there were 66,183 new positive tests logged over the last 24 hours, down 41.1 per cent on the 112,458 recorded last week. It was the lowest daily infection figure on a Tuesday since December 14 — towards the start of the Omicron wave.

The number of people admitted to hospital with the virus also fell, dropping 12.8 per cent to 1,421 on February 3, the latest date data is available for.

But deaths increased for the first time in six days today, increasing 43.4 per cent from 314 last week to 219. The number represents the amount of deaths recorded today — not the total that actually occurred. Covid deaths by day of occurrence have been dropping for more than a week, as the UK continue to emerge from the winter wave.

The figures come after England’s chief medical officer Sir Chris Whitty wrote an open letter to NHS medics to tell them they have a ‘professional responsibility’ to get vaccinated against Covid.

Health Secretary Sajid Javid last week performed a last-minute U-turn on the controversial ‘no jab, no job’ policy for health workers over fears it would leave hospitals short staffed. Up to 80,000 unjabbed workers faced being fired because of the rule, which would have meant they needed two doses by April 1 to keep their job.

Today’s Government data also showed there were 32,627 booster doses dished out today. It takes the UK’s total up to 37.6million people.

Sir Chris publicised his letter to NHS colleagues urging them to take up the offer of a jab to protect their patients. 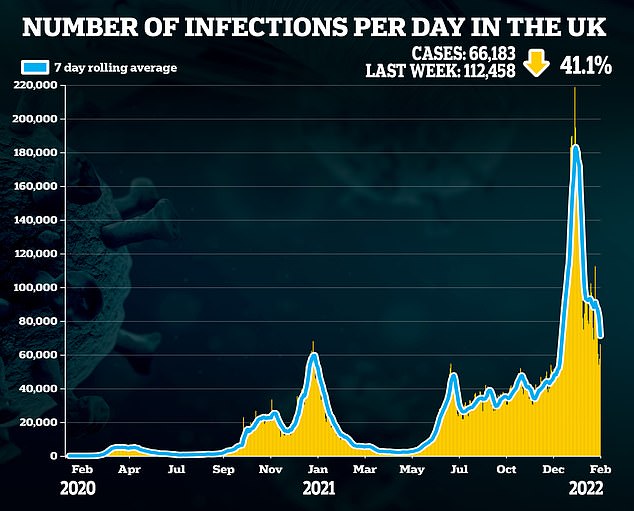 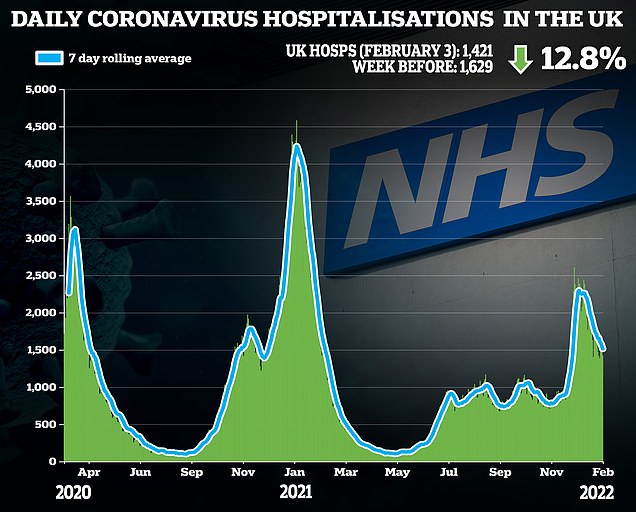 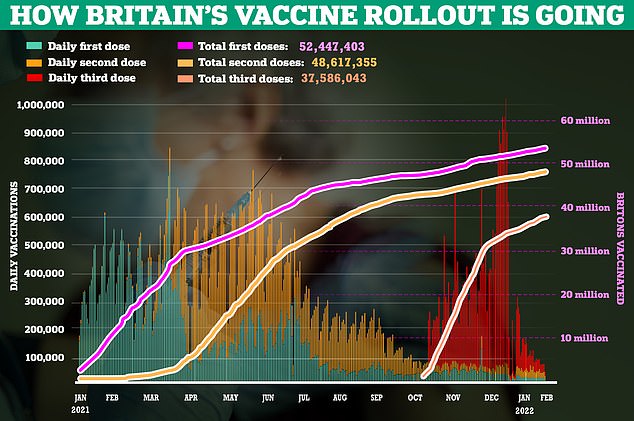 He wrote ‘questions of professional responsibility and legal mandation are separate’, arguing the public expect staff caring for their vulnerable relatives to do everything in their power to avoid passing on the virus.

While admitting jabs do not provide ‘absolute’ protection against infection, he said they do minimise reduce the risk, particularly after a booster dose.

Sir Chris said: ‘Our professional responsibility is to get the Covid vaccines as recommended, to protect our patients. At the same time the vaccine protects us. The great majority of healthcare workers have already done so. We hope those of you who have not will consider doing so now.’

Sir Chris said discussions around responsibility came before those about compulsory jabs, with all ‘professional bodies, Colleges [and] regulators’ agreeing medical staff have a duty to get vaccinated.

He said: ‘The public reasonably expect it of those who care for them or their vulnerable relatives because it is one of the simplest things that we, as healthcare workers, can do to protect patients.’