At least it’s not going in the bin! No10 wants to burn up to 580 LORRIES’ worth of unused face masks, gloves and aprons each month to make electricity so that £4BILLION of PPE doesn’t go to waste

Department of Health bosses told MPs today they have a radical plan to avoid wasting 5.5billion pieces of faulty or excess PPE bought during the pandemic.

It will involve sending 15,000 pallets of visors, gowns and gloves to be burned at power plants each month to generate energy.

Officials also want to recycle the equipment and turn them into NHS bedsheets, curtains, food trays or bin bags.

The move is the latest attempt to recoup part of the of the billions of pounds wasted on protective gear in the first year of the pandemic.

Contracts were handed out via a ‘high priority lane’ in 2020 which saw firms handed huge sums without having to go through the normal procurement route.

It led to accusations of ‘cash for cronies’ after it emerged that friends and associates of Tory MPs were the beneficiaries of the scheme.

It comes as millions Britons face soaring energy bills, although the plan to burn PPE to make electricity is not believed to be in response to that ongoing crisis.

Government officials hope to use up to 15,000 pallets of PPE unusable by the NHS through burning it for power generation 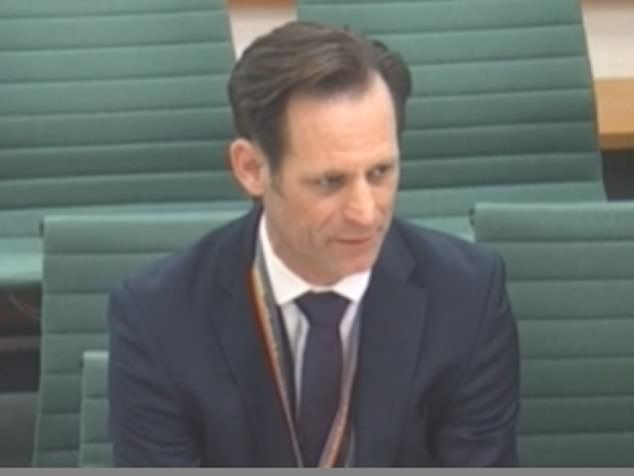 Jonathan Marron, department director general of office for health improvement and disparities, revealed the prospect of burning PPE in power plants to generate heat and electricity to MPs today

Department of Health officials revealed the prospect of burning PPE in power plants to generate heat and electricity to MPs today during a session of the Public Accounts Committee analysing Government spending on PPE from 2020 to 2021.

MPs also heard how about £4billion of the £12billion purchased in that period is unusable by the NHS.

Officials explained this was either because it was counterfeit or was of a lower standard.

Britain records 126,605 Covid cases over last three days as outbreak rebounds 54 PER CENT in a week

Government dashboard data showed the combined infections on Saturday, Sunday and Monday were 54 per cent higher than the total last week.

Officials have stopped releasing the daily figures at weekends as part of a wind-down of the way the epidemic is reported, meaning a three-day total is released every Monday.

Another 139 Covid fatalities were registered over the weekend, up by just one on the 138 last week. Deaths lag by several weeks behind cases so any fluctuations would not be expected for some time yet.

Meanwhile, latest hospital data shows there were 1,287 admissions were recorded on March 1, up 15 per cent on the tally from a week ago.

The flare-up in infections comes after England’s ‘Freedom Day’ on February 24 and amid the spread of a more infectious version of Omicron.

Experts warn the more infectious variant may cause some fluctuations in case rates, but say there is no reason to panic because there is no evidence the strain is more likely to cause severe disease.

Jonathan Marron, department director general of office for health improvement and disparities, told MPs about the plan to get some use out of the estimated 5.5 billion low quality stockpiles that are unfit for the NHS to use.

‘We’re currently appointing to what are called lead waste partners, commercial firms who do this as their business who will help us recycle and we’re also exploring using it for…waste to provide power,’ he said.

‘We think we move up to 15,000 pallets a month when we get these contracts in place, so  a really significant way of seeing recycling increase and indeed using some of the product to drive power generation.’

Mr Marron noted that a lorry fits about 26 pallets of PPE.

Some of examples of potential recycling Mr Marron detailed to MPs included turning visors into food trays and aprons into bin bags.

Previously, health ministers have floated the idea of using the equipment to make bedsheets and curtains for hospitals.

Some of the Government’s unused PPE will remain in limbo however, with 1.5billion pairs of gloves currently unused due to possible being made by slaves.

Last month it was revealed that £9billion of taxpayer’s has been wasted on purchasing PPE.

An official report revealed the Department of Health spent £12.1billion on PPE in the first year of the pandemic – from April 2020 to April 2021 – but £8.7billion was wasted.

It estimated that £673million went on equipment found to be totally unusable, and £750million on items that were not used before their expiry dates.

Nearly £2.6billion was spent on ‘items not suitable for use in the NHS,’ while £111.5million was lost through transport delays. Two flights from China had to be cancelled due to lack of stock availability but the Government still paid the £649,000 deposit to the airlines.

Ministers also paid hugely over the odds and were left with equipment that later crashed in value.

In all, £8.7billion has had to be written off by the Department of Health and Social Care.