UK economy ‘will bounce thanks to Brexit clarity’: Economists upgrade growth forecasts with just FOUR DAYS until the country legally leaves the EU – but say the nation needs smooth trade talks with Brussels in order to ‘kick on’

The EY Item Club upgraded its growth forecast to 1.2 per cent for 2020 from the 1 per cent previously predicted, though it marks a slowdown on the estimated 1.3 per cent seen in 2019.

But the upgrade was tempered by a warning over Mr Johnson’s plans to get a trade deal signed with Brussels by the end of the year.

EY warned that the economy would fail to ‘kick on’ if Mr Johnson failed to achieve his goal of at least an outline deal by December 31.

The EY Item Club upgraded its growth forecast to 1.2 per cent for 2020 from the 1 per cent previously predicted, though it marks a slowdown on the estimated 1.3 per cent seen in 2019 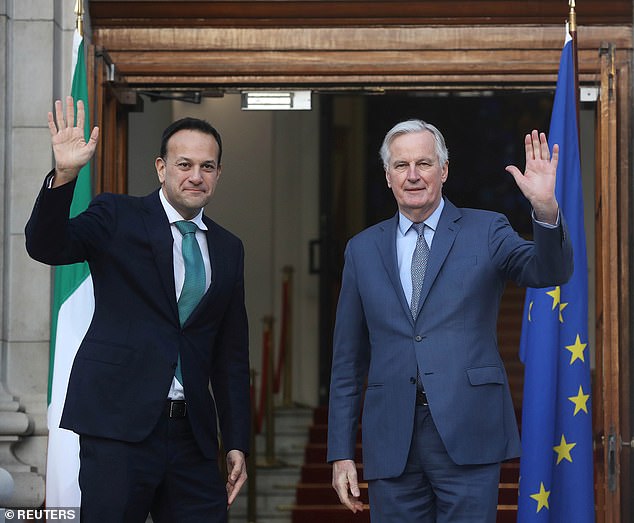 And it said that much growth would depend on Mr Johnson realising his aim of increasing investment and ‘levelling-up under-performing parts of the UK.

Downing Street today suggested access to UK waters for EU fishing boats will be on the table during post-Brexit trade talks with Brussels.

The UK will take back control of its territorial waters after it leaves the bloc and it will be able to decide whether to grant non-British boats access.

The EU is adamant European trawlers must be given the right to fish in the waters but the British fishing industry believes access should be restricted.

Number 10 said the UK will be ‘taking back control of our waters’ but added that ‘it will be for the UK to determine’ whether the vessels of any other nations will be allowed to fish in those waters in a hint the rights could be up for grabs.

Leo Varadkar set out the bloc’s expectations on the issue in an interview with the BBC in which he said the UK ‘may have to make concessions in areas like fishing’.

He said that in return the EU could make concessions in other areas like financial services.

It came as Downing Street confirmed trade negotiations with the EU will be led by the PM’s Brexit sherpa David Frost and his Task Force Europe unit based in the Cabinet Office.

Meanwhile, Tim Barrow, the UK’s current representative to the EU, will become the UK’s ambassador to the bloc after Britain splits from Brussels on Friday night.

Mark Gregory, EY’s UK chief economist, said: ‘There may be some improvements in the economy, but it’s not time to pop the champagne yet.

‘While we have some clarity, there are still significant unknowns – about the trade deal around Brexit, and the wider policy agenda of Government.

‘The Government has indicated that it will be aiming to use the Budget to boost investment in infrastructure and help ”level up” economic performance in struggling towns.

‘It should also aim to encourage businesses to invest and consumers to responsibly increase their spending to provide growth to support the plans for economic rebalancing.’

It came as Irish PM Leo Varadkar today warned Mr Johnson that the EU is ‘stronger’ than Britain ahead of trade talks.

The Taoiseach made clear he believes the bloc will emerge on top in wrangling over the future relationship, saying the UK will not ‘have its cake and eat it’.

In an interview beforehand with the BBC, Mr Varadkar deployed a footballing analogy to claim the bloc has a ‘stronger team’ because of its far larger population and market.

Mr Varadkar also suggested that Mr Johnson might run out of time to get a trade deal signed before the end of the year, when the transition period finishes.

In its report, the EY Item Club said that ‘the decisive nature of the General Election result and the resulting clarity on the first stage of Brexit’ were expected to provide ‘a short-term boost to economic activity’.

But is added: ‘The UK economy is likely to show signs of improvement in the early months of 2020 but may struggle to ”kick on” as the year progresses due to uncertainty around the EU and UK’s longer-term relationship.

‘The EY ITEM Club expects the UK economy to see stronger growth in 2021 as a result of reduced uncertainties, fiscal stimulus, a healthier labour market and a brighter global economic environment.

‘This is based on the assumption that the UK and EU reach some form of Free Trade Arrangement by the end of 2020, or end up extending the transition agreement.’